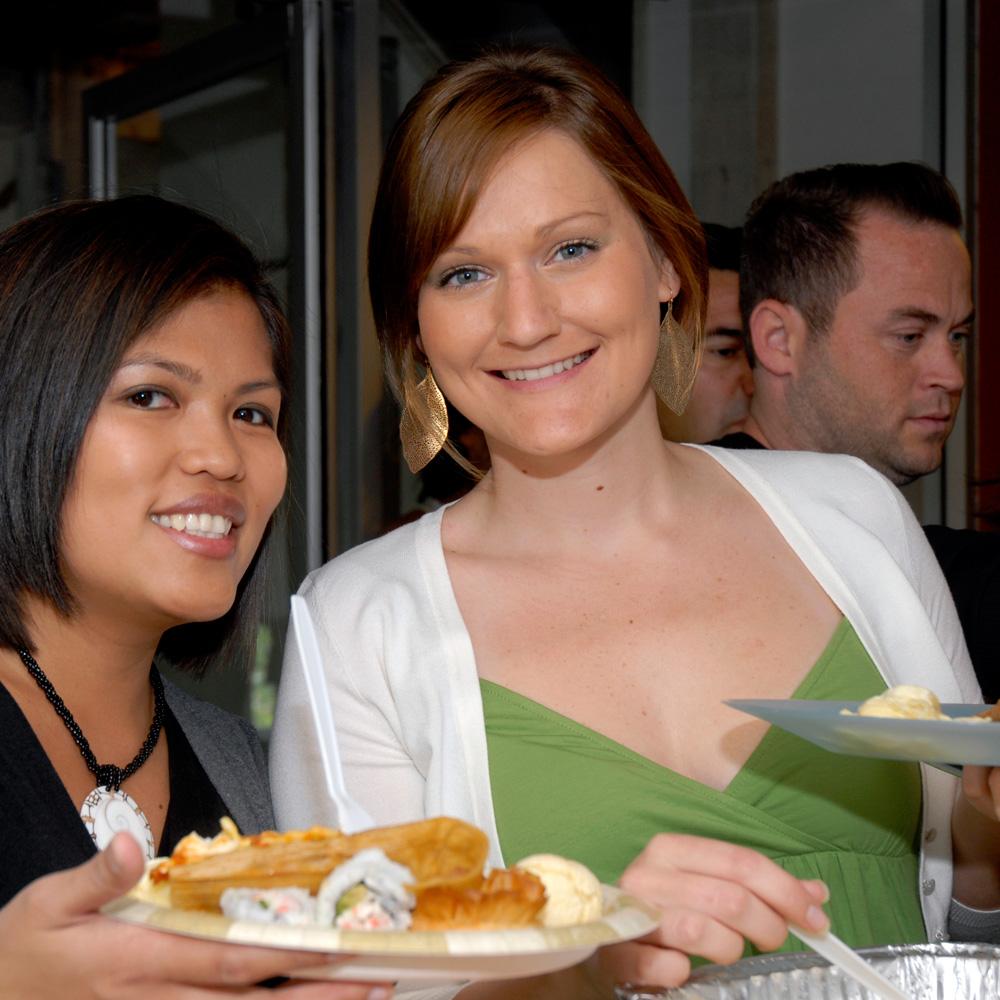 IRVINE, CA – Previously proclaimed as one of Orange County’s best places to work and top green companies, Earthbound Media Group (EMG) continues to uphold its reputation for its commitment toward invigorating a positive team environment and promoting a “green” company culture. A week prior to its official date, EMG celebrated and recognized Earth Day by hosting its second annual International Potluck at its Orange County headquarters on Thursday, April 16th, where team members were able to socialize and mingle while feasting on a smorgasbord as diverse as the EMG team.“Team-building events like the Earth Day International Potluck is one of the most anticipated events of the year,” explained EMG Manager of People and Facilities Norma Villicana. “Aside from highlighting the incredible diversity here at EMG, the event also brought to light some simple green initiatives that could be implemented in our everyday lives both in and out of the workplace.”Proudly sponsored by EMG’s “Fun Committee” and the “Eco- and Social-Responsibility Committee,” team members gathered together to enjoy a 2-hour luncheon comprised of a wide array of culturally-inspired appetizers, entrees and desserts. From homemade tamales and Cuban rice to Mediterranean falafels and kabobs, team members were able to sample foods from around the globe while embracing and learning more about the variety of cultures represented by the EMG team.Prizes were also awarded to EMG team members whose raffle tickets were drawn toward the end of the pot luck. Team member earned raffle tickets during the course of the week by participating in various socially and environmentally conscious practices, including powering off computers at the end of the day and bringing in a coffee mug to use instead of paper coffee cups. “The International Potluck was a great way to de-stress and relax right in the middle of our work day,” added EMG’s Office Coordinator Tawny Parra. “I enjoyed trying new and familiar foods while getting to know more about each team member’s respective cultural backgrounds. The chance to create a dish that is special to them and reflective of who they are, and then share it with others, makes this event a little more personal.”About EMG (www.earthboundmediagroup.com)EMG is a one-of-a-kind, technology-driven strategic marketing agency. Our singular goal is to evolve the digital and visual landscapes of business for corporations, brands and non-profits worldwide. As a leader in the marketplace, EMG has single-handedly set a benchmark for complexity, creativity and vitality in the solutions we have provided for both our partners and clients alike.Earthbound Media Group 14988 Sand Canyon Ave., Studio 5 Irvine, CA 92618 Contact: emginfo@earthboundmediagroup.com

08-31-2017 | Health & Medicine
REPORTSANDMARKETS
EMG Equipments Market Report 2017
Browse the full report with a table of contents: https://www.reportsandmarkets.com/reports/united-states-emg-equipments-market-report-2017-1547580 In this report, the United States EMG Equipment market is valued at USD XX million in 2016 and is expected to reach USD XX million by the end of 2022, growing at a CAGR of XX% between 2016 and 2022. Geographically, this report splits the United States market into seven regions: The West Southwest The Middle Atlantic New England The South The Midwest with sales (volume), revenue
11-09-2009 | Advertising, Media Consulting, …
Earthbound Media Group
EMG Nominated at DMACS Awards
EMG Nominated at DMACS Awards IRVINE, CA – Earthbound Media Group (EMG) is honored to announce its nomination by the Digital Movie Advertising Creative Showcase (DMACS) awards for its work on the cross-channel marketing campaign for 20th Century Fox’s I Love You, Beth Cooper. EMG submitted the campaign to the category of Multi-Channel Cross Media Campaign for Theatrical or Home Video Movie Releases, and the campaign’s primary website, www.iloveyoubethcooper.com,
09-29-2009 | Advertising, Media Consulting, …
Earthbound Media Group
EMG Attends Annual SHSMD Conference
IRVINE, CA – Earthbound Media Group’s (EMG) Chief Operating Officer Blaine Behringer, Communications & Brand Experience Director Amanda Vande Brake and Consulting Group Director Kevin Lorenz will attend the Society for Healthcare Strategy and Market Development’s (SHDMD) Connections 2009 Annual Conference and Exhibits. Focused on real-world strategies to navigate through today’s healthcare challenges, the SHSMD Conference will be held from Wednesday, September 30th, through Saturday, October 3rd, at the J.W.
06-06-2008 | Advertising, Media Consulting, …
Earthbound Media Group
EMG Wins Prestigious Telly Award
IRVINE, CA – Earthbound Media Group (EMG) is proud to announce the latest win for its award-winning ULV Virtual tour with a Bronze Telly Award. Capturing a bronze statuette in the recruitment category, the ULV virtual tour (www.ulv.edu/virtualtour) was recognized by the 28th Telly Awards competition for its innovative approach to engaging potential college students through a technology- and video-driven interactive experience. “The ULV virtual tour is truly a one-of-kind
05-02-2008 | IT, New Media & Software
Earthbound Media Group
EMG Certified by Interwoven Optimost
IRVINE, CA – At the forefront of implementing the latest technologies, Earthbound Media Group (EMG) is thrilled to announce its recent certification from enterprise partner Interwoven’s multivariate testing technology Optimost. One of only seven agencies to be certified in Interwoven Optimost, EMG is taking its clients’ online marketing strategies and initiatives to even higher levels of performance. “We’re thrilled that Interwoven Optimost chose EMG for its inaugural certification process,” said EMG
01-29-2008 | Advertising, Media Consulting, …
Earthbound Media Group
CNNMoney.com Features EMG
IRVINE, CA – 2007 ended nicely for Earthbound Media Group (EMG) with EMG sharing the spotlight with enterprise technology partner Interwoven in a December 12th CNNMoney.com news story. The featured article highlighted EMG and Interwoven’s success in driving daily traffic to Loma Linda University Medical Center’s (LLUMC) Proton Therapy and Treatment website, protons.com. “EMG is truly excited to be featured on CNN. The exposure and recognition by a leading news
Comments about openPR
OpenPR is clearly structured and remains true to its principle of confining itself to the essential parts. OpenPR has proven to be a very good and reliable partner to our media agency: Within the shortest time the releases are online and go down well with the media representatives. The success of OpenPR is reflected in the steadily increasing number of press releases. It is good that OpenPR exists!
Ursula Koslik, Director Marketing & PR, F+W Hamburg