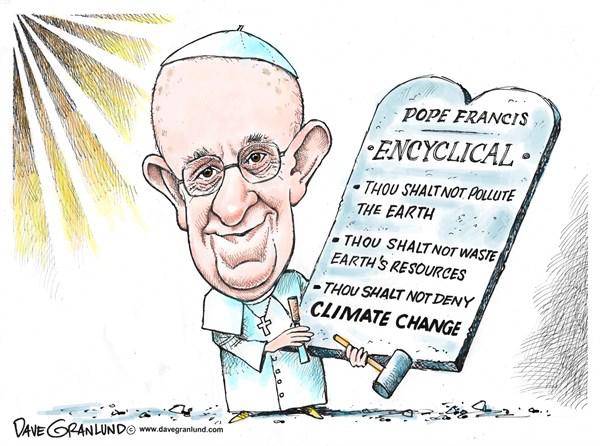 Pollution is now the new “original sin” that needs to be condemned and climate change deniers are the new sinners that are in need of redemption. The new gospel message is preaching the immediate phasing out of fossil fuels. This is the new salvation that the world needs today, according to the “new” gospel coming out of the Vatican. All this is a bunch of HOT air that is several degrees warmer than Al Gore’s global warming gospel.

Pope Francis wants to mobilize political leaders around his message so that they can pass legislation that will transform our global economic structure to a “green” technological system of justice. This vision includes the redistribution of wealth from the industrialized nations to third world countries under the guise of “climate change.”

The good fight is no longer about combating abortion, gay marriage or family values. What is going to destroy our world are not these traditional moral issue, no, we need to be preoccupied in combating greenhouse gases.

Sorry Pope, the church is not called to preach politics, communism, socialism or any other “gospel.” We are told in God’s word that we cannot allow anyone to remove us to “another gospel.”

“I marvel that ye are so soon removed from him that called you into the grace of Christ unto another gospel: Which is not another; but there be some that trouble you, and would pervert the gospel of Christ. But though we, or an angel from heaven, preach any other gospel unto you than that which we have preached unto you, let him be accursed. As we said before, so say I now again, If any manpreach any other gospel unto you than that ye have received, let him be accursed. For do I now persuade men, or God? or do I seek to please men? for if I yet pleased men, I should not be the servant of Christ.” Galatians 1:6-10.

11-21-2020 | Leisure, Entertainment, Miscel …
Advent Messenger
Fratelli Tutti: Ganoune Diop Praises Pope Francis’ Encyclical
The pope is working overtime to unite all of the religious faiths of the world into one family. Pagans, spiritualists, Mother Earth worshippers, homosexuals, Protestants, Catholics, indigenous faiths and eastern religions are all part of Rome’s one-world brotherhood. Truth and doctrine no longer matter anymore according to the Pope’s encyclical, Fratelli Tutti. Just yesterday, Roman Catholics, Evangelicals, Orthodox and Seventh-day Adventists gathered to praise Fratelli Tutti. Over thirty religious leaders
02-22-2019 | Arts & Culture
Wiedmann Media AG
Pope Francis receives unique Bible translation from Germany
Rome / Stuttgart. Faith can move mountains. In this case, the saying goes even beyond death. At the general audience, in the audience hall Paul VI in Rome, Pope Francis received the number ONE of the limited Wiedmann Bible ART edition on February 20th. The original is worldwide unique. It is a visual narrative of the Bible depicting the Old and New Testament in 3,333 illustrations. A printed copy of
09-13-2012 | Health & Medicine
Altitude Marketing
CGIRB promotes Dawn Pope to Chief Operating Officer
September 6, 2012 – Research Triangle Park, N.C. – Copernicus Group IRB (CGIRB), a leading independent institutional review board, today announced the promotion of Dawn Pope to Chief Operating Officer. In her new position, Ms. Pope will provide leadership and direction for the overall operations of the company, planning and coordinating the development of strategic objectives and goals. Ms. Pope came to CGIRB from Clinical Trials Support Services, Inc., in 1998.
04-28-2011 | Politics, Law & Society
Androvett Legal Media
Texas Center for Legal Ethics Names 2011 Pope Awards Recipients
AUSTIN – The Texas Center for Legal Ethics is pleased to announce this year’s winners of the Chief Justice Jack Pope Awards: Federal Judge Will Garwood and Austin attorney William Hilgers. The Pope Awards are given each year to one judge and one lawyer who epitomize the highest standards of professionalism and integrity. The awards honor one of the founders of the Texas Center for Legal Ethics, former Chief
02-02-2011 | Science & Education
EsoGuru
UFO Investigator Nick Pope discusses the Real X Files
The event Nick Pope will begin the lecture by giving an overview of the British government’s involvement with the UFO phenomenon, which dates back to 1950, when the Ministry of Defense established a small committee to examine the phenomenon, known as the Flying Saucer Working Party. He will explain government policy on this issue and detail the way in which investigations were carried out. Nick Pope will then discuss a number of cases
09-26-2006 | Politics, Law & Society
Imperato-Brooks 2008
Vatican News: Papal Knight Speaks on Pope Benedict XVI and Religious Freedom
Los Angeles – September 24, 2006 - Today Papal Knight and 2008 US Presidential Candidate Daniel Imperato spoke out regarding the recent statements of Pope Benedict XVI and religious freedom. “I call on the world today, particularly the Christians and the Muslims, to realize that our Pope Benedict XVI has made a mistake in addressing the issue of Prophet Muhammad during his trip to his hometown Regensburg, Germany.
Comments about openPR
We publish our press releases on openPR.de because we like people who are "open" - just like us.
Frank Obels, CEO, INCONET - Informationssysteme, Communication und Netzwerkberatung GmbH