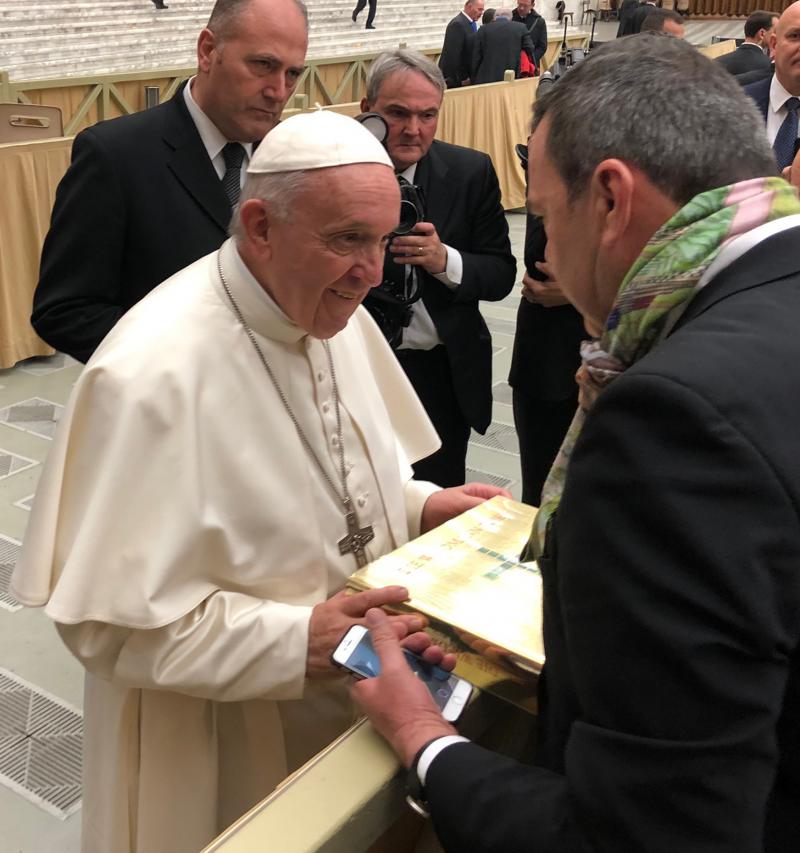 Rome / Stuttgart. Faith can move mountains. In this case, the saying goes even beyond death. At the general audience, in the audience hall Paul VI in Rome, Pope Francis received the number ONE of the limited Wiedmann Bible ART edition on February 20th. The original is worldwide unique. It is a visual narrative of the Bible depicting the Old and New Testament in 3,333 illustrations. A printed copy of the special ART-Edition was gifted by the son of the artist, Martin Wiedmann."It was overwhelming. I stood in the Prima Fila (1st row). I have never been so full of anticipation in my life. Pope Francis listened attentively to Martin telling the Wiedmann Bible's story and was very enthusiastic about the work. My father worked long and hard on this Bible. Even in times when he was seriously ill. His faith strengthened him and never let him give up his hope that his Bible will be published one day," says Martin Wiedmann.However, Willy Wiedmann (1929-2013) did not know back then that his son would be the one taking on this mission. He discovered the Bible with its 3,333 paintings in the attic of his father's gallery. He digitized the illustrations and first published virtual versions of the Bible. In cooperation with the German Bible Society and the renowned photographer and designer Manfred Rieker, the Wiedmann Bible was published as a print edition for the first time in February 2018. The limited ART-Edition contains all illustrations of the original. Comments as well as a biography of the artist and various bible verses from the revised Luther Bible 2017 complement the images. The golden edition is limited to 333 copies, the red and black edition to 3,000.By now, among others, the Gutenberg Museum in Mainz, the Bavarian State Library in Munich, the Duchess Anna Amalia Library in Weimar, the Bible Museum bibliorama in Stuttgart and the largest bible museum in the world, the Museum of the Bible in Washington D.C. (USA), added the Wiedmann Bible ART edition to their inventory. If and where the Wiedmann Bible ART-Edition will be showcased in the Vatican is not yet known.For more information visit us at www.thewiedmannbible.com/press-kit.Wiedmann Media AG: Production and distribution of artistic, literary and graphic works. The Company may acquire, enhance and dispose of licenses and other intellectual property. The Company is the owner of the Wiedmann Bible. About the Wiedmann Bible The Wiedmann Bible is the only visual narrative of the Bible depicting the complete Old and New Testament in 3,333 illustrations. After 16 years (1984–2000) of creative effort, and with the help of over 40 different Bible translations, German artist Willy Wiedmann completed his life’s work: 19 leporellos (accordion-style books) containing 3,333 images with a total length of almost 1 mile. Due to the lack of technology and monetary funds, Wiedmann was not able to publish his artwork. Because of this, he stored it in four aluminum boxes in his gallery’s attic in Stuttgart, Germany, where it fell into oblivion. After Wiedmann’s death in 2013, his son Martin found the leporellos  and decided to complete his father’s mission: to share the Bible with the world. Today, it is known as the Wiedmann Bible and it is the longest illustrated Bible ever created. You can discover the Wiedmann Bible through an interactive app and kiosk in English, German, and Spanish, as well as through a limited print edition. In 2018, the Wiedmann Bible made its first visit to the US and is now on display at Museum of the Bible in Washington, DC, until April 28, 2019. About Willy Wiedmann Wilhelm Richard Heinrich “Willy” Wiedmann (* March 14, 1929, in Ettlingen, Germany † June 21, 2013, in Stuttgart, Germany) was a musician, composer, visual artist, church painter, gallery owner, curator, husband, and father. Wiedmann created his own artistic style which he called Polycon. It is made up of multiple panels comprised of geometric forms that overlap, intertwine and complement each other. The different compositions create pictures within pictures, which can be perpetuated endlessly. His vision was to create a complete, illustrated Bible as a continuous visual narrative. He pored over the words of the Bible, using over 40 different translations to aid his understanding. In 2002 the Willy Wiedmann was awarded the Order of Merit of the Federal Republic of Germany for his work in the service of art and culture.Contact the Wiedmann Bible: Wiedmann Media AG Martin Wiedmann P.O. Box 614 CH - 8853 Lachen SwitzerlandMartin Wiedmann Tel.: +41 79 400 9774 Diana Lammerts Tel.: +49 151 240 77997 Email: mailto:press@thewiedmannbible.com

09-25-2019 | Arts & Culture
Wiedmann Media AG
Museum of the Bible Receives Unique German Bible for Collection
Washington/Stuttgart, September 25th, 2019 — From today on, the largest Bible museum in the world will call the world’s longest painted Bible its own. President and CEO Ken McKenzie will accept the gift of one of the limited print copies on behalf of the Museum of the Bible in Washington D.C. (USA). Occasion for the handover of the golden ART-Edition is that one of the museum’s most popular exhibitions has come
12-04-2017 | Arts & Culture
Wiedmann Media AG
German illustrated Bible sets World Record
Germany - Stuttgart/Magdeburg December 2nd 2017. The Wiedmann Bible has set a Guinness World Record as the world's largest concertina book. It features a surface area of 645.2 square metres. On May 7th 2017 Magdeburg - Germany was venue for a one of a kind event. For the first time in history the Wiedmann Bible was completely unfolded over a distance 1517 meters. More than 500 volunteers helped unfolding the 3,333
09-12-2017 | Arts & Culture
Wiedmann Media AG
The Wiedmann Bible illuminates 50 Monuments in the US
Stuttgart - Germany, September 12th 2017. Starting September 16th 2017 the Wiedmann Bible will be part of the “Light Art Grand Tour USA”. For the next 3 years the world-renowned Light Artist Gerry Hofstetter will travel all 50 states of the U.S. and put different landmarks into spotlight that have played an important role in the country’s history. Pennsylvania’s Washington Crossing at Washington Crossing is the first of 50 monuments that
05-22-2017 | Arts & Culture
Wiedmann Media AG
The Biblical Stories in 360 degree - one of a kind Bible as Virtual Reality
Becoming a part of the Garden of Eden or attending the Last Supper. At the German Protestant Kirchentag in Berlin the Wiedmann Bible shows visitors a way how to experience the Holy Scriptures in a completely new way. It depicts the complete Old and New Testament solely through images - 3,333 to be precisely. This makes the Wiedmann Bible not only unique but also opens opportunities for a new access through

12-14-2020 | IT, New Media & Software
Market Insights Reports
Bible Software (Biblical Software) Market Precise Outlook 2020- Faithlife Corpor …
The Global Bible Software (Biblical Software) Market Research Forecast 2020 - 2025 provides a comprehensive analysis of the market segments, including their dynamics, size, growth, regulatory requirements, competitive landscape, and emerging opportunities of the global industry. It provides an in-depth study of the Bible Software (Biblical Software) market by using SWOT analysis. The research analysts provide an elaborate description of the value chain and its distributor analysis. This Market study
12-04-2017 | Arts & Culture
Wiedmann Media AG
German illustrated Bible sets World Record
Germany - Stuttgart/Magdeburg December 2nd 2017. The Wiedmann Bible has set a Guinness World Record as the world's largest concertina book. It features a surface area of 645.2 square metres. On May 7th 2017 Magdeburg - Germany was venue for a one of a kind event. For the first time in history the Wiedmann Bible was completely unfolded over a distance 1517 meters. More than 500 volunteers helped unfolding the 3,333
05-12-2017 | IT, New Media & Software
M2M
Worldwide Technology of M2M Bible 2017
ALBANY, NY, May 12, 2017 : Despite its low ARPU, the wireless M2M market has become a key focus of many mobile network operators as their traditional voice and data markets become saturated. Likewise, government and regulatory initiatives such as the EU initiatives to have a smart meter penetration level of 80% by 2020 and the mandatory inclusion of automotive safety systems such as eCall in all new car models,
11-01-2016 | Arts & Culture
Wiedmann Media AG
German Bible Society to publish unique illustrated Bible
3,333 Bible illustrations by Willy Wiedmann depicting the Old and New Testament in two volumes The Wiedmann Media AG and the German Bible Society will publish a one of a kind Bible Art-Edition by the end of 2017. It depicts the complete Old and New Testament in 3,333 images and was painted by the German artist Willy Wiedmann. The limited Art-Edition will be published in two volumes, containing a total
03-21-2016 | Science & Education
Wiedmann Media AG
THE WIEDMANN BIBLE supports United Bible Societies
THE WIEDMANN BIBLE supports United Bible Societies Stuttgart. Bible study has reached a new level of greatness. For the first time you can experience the complete Old and New Testament visually. The German artist Willy Wiedmann originally painted THE WIEDMANN BIBLE in order to bring Christians closer to The Holy Scriptures by studying it actively and without being distracted by words. The artwork contains of 3,333 hand painted pictures painted
01-15-2007 | Leisure, Entertainment, Miscel …
WikWebGuide LLC
The Indie Bible Spotlighted in WikiMusicGuide
Norwalk, CT, January 15, 2007 - WikiMusicGuide proved once again that it is not just for musicians but for anything related to music as well, by featuring the site of the Indie Bible as Site of the Week at http://www.wikimusicguide.com/. The Indie Bible is a directory that provides singers and song writers with a long list of music review channels and sites, independent artist music stations and album/CD merchants
Comments about openPR
OpenPR ist the nicest and most clearly laid out PR platform I have seen to this day. The press releases are displayed very nicely and clearly and without any unnecessary frills. The updates are fast and the finished release looks appealing and is clearly legible. Even with 16 years of experience one discovers new things from time to time. Congratulations!
Gabriele Ketterl, Director Marketing & PR, Menads