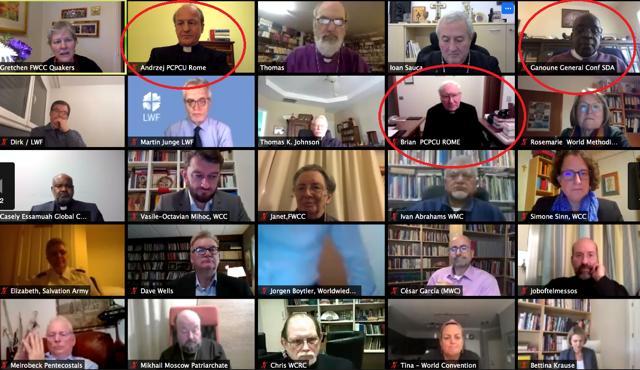 09-29-2020 | Leisure, Entertainment, Miscel …
Advent Messenger
Witchcraft is in Full Communion with Rome
The Pope’s document on Human Fraternity signed at Abu Dhabi is on full display. What was once condemned as idolatrous and sacrilegious is now part of God’s will, according to the document on Human Fraternity, co-signed by Pope Francis, which says that “pluralism and the diversity of religions … are willed by God in His wisdom.” [1] On August 28, 2020, Roman Catholic Bishop Brian Gregory Mascord of Wollongong, Australia, [2]
11-02-2017 | Leisure, Entertainment, Miscel …
Advent Messenger
Protestants are Returning to Rome
We are seeing the final act of the drama develop before our eyes. The union of all the churches is an event of the end-times that will happen only one time - unlike wars, earthquakes and famines which are events that repeat themselves throughout history. Protestants are becoming absorbed into the Roman Catholic Church and this significant act on the part of Protestantism will lay the foundation for setting up
11-29-2010 | IT, New Media & Software
Awem studio
Awem studio launches Cradle Of Rome 2
Awem studio, the developer of such titles as Golden Trails: The New Western Rush, Letters from Nowhere, The Island: Castaway, Romance Of Rome, Cradle Of Rome and Cradle Of Persia announces the release of Cradle Of Rome 2, a long-anticipated sequel to the hit puzzle game Cradle Of Rome 2 is a delightful flashback to the lands of ancient Rome. With gorgeous hand-drawn graphics, soothing soundtracks and 100 levels of dazzling
05-31-2010 | Arts & Culture
Scuola Leonardo da Vinci
Studying History of Art in Rome
Rome is the only and true Eternal City with its 28 centuries of history still visible in the unique complex of masterpieces that have survived the passage of centuries. A place where each new civilization overlapped the old one, a multilayered open air museum where visitors can see a medieval church next to imperial roman ruins and with Renaissance and Baroque art masterpieces decorating its inside. A city whose urban richness has
12-07-2009 | IT, New Media & Software
eyevis
Eyevis established new office in Rome
Due to many projects in Italy in 2008 and this year like for Rai Way SpA, Anas SpA, Atac SpA, Siemens SpA or ABB SpA the German manufacturer decided to open an office in the capital of Italy. The office in Rome, will support the company in its efforts to market products for large video systems or video walls in command and control rooms but also systems for simulation and
06-05-2008 | Leisure, Entertainment, Miscel …
Vicarious Productions
Rome Talent Presents Workshop by Multimedia Entertainer
June 5, 2008 – San Antonio, TX – Rome Talent Agency presented a workshop entitled “Acting in Action” by multimedia entertainer Jade Esteban Estrada on Monday, June 2, 2008 at the John Igo Public Library in San Antonio, Texas. Estrada, who is the host of the 19th Annual South Florida GLAAD Media Awards set to air June 27 on Bravo, took time out of his tour schedule to give an
Comments about openPR
OpenPR is clearly structured and remains true to its principle of confining itself to the essential parts. OpenPR has proven to be a very good and reliable partner to our media agency: Within the shortest time the releases are online and go down well with the media representatives. The success of OpenPR is reflected in the steadily increasing number of press releases. It is good that OpenPR exists!
Ursula Koslik, Director Marketing & PR, F+W Hamburg