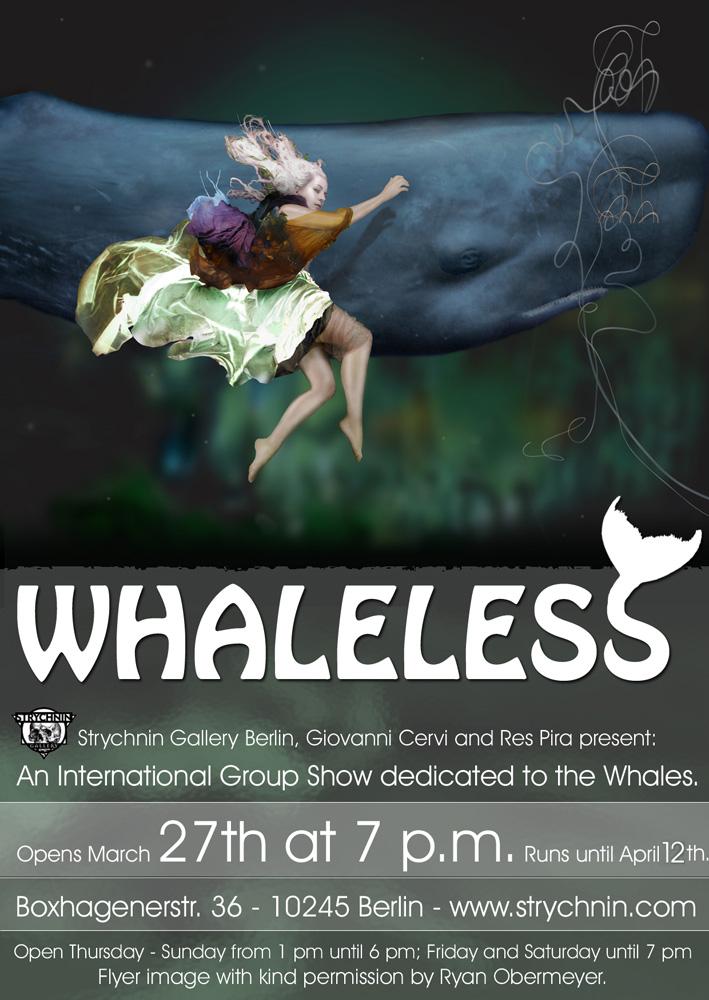 "Whaleless" features over 30 artists from all over the world.

"Whaleless" is an art project dedicated to those artists wishing to express their indignation, rage, shame, disbelief or concern about the slow disappearance of the fascinating giant marine mammals. Pollution, whaling and unacceptable fishing practices are only some of the causes that seriously endanger their survival. It seems that they are slowly but inevitably growing extinct, while the consequences of their gradual disappearance are impossible to predict. And yet we can be certain that the world’s ecosystem – not just the oceans’ but that of our entire planet – will be affected by this change. The world would not be the same without whales, which is why action needs to be taken immediately. The project "Whaleless" was born 3 years ago on the pages of the Italian Pig magazine, created by the Italian curators Giovanni Cervi and Res Pira. The domain whaleless.com, which by now features over 200 artowrks the duo has since received from all over the world – ranging from the USA to Honk Kong, from Russia to Venezuela – has since gotten hundreds of thousands of clicks: “Whaleless” was ready to begin its international exhibition tour. Starting at Strychnin Gallery London in July 2008, the exhibition has since travelled to La Rochelle and Florence, and will continue to travel over the next few years, trying to raise awareness for this global environmental problem. Please find introductions to three of the "Whaleless" artists on the next page!Artists featured include (among others): Ashley Wood, Catalina Estrada, Stuart Semple, Wayne Chisnall, Lee Baker, Arianna Carossa, Squp, Chris Bonobo, Ryan Obermeyer, Zaelia Bishop, Aurélien Police, Nicoz Balboa, Giuliano Sale, Silvia Argiolas, Kokomoo, Tamara Ferioli, Marie Luise Emmermann, Bethany Marchman, Jenny Bird, LostFish, Lisa Mei Ling Fong, Wade Furlong, Chris von Steiner, Barbara Canepa, Ansgar Noeth, Angie Mason, Karin Andersen and Zoe Lacchei. "Whaleless" is realized with the kind support of PIG-Magazine.Opening night: March 27th, 2009, 7 p.m. End date: April 12th, 2009 Opening times: Thu - Sun 1 p.m. – 6 p.m.; Fr and Sat until 7 p.m.With galleries in three bustling hotspots – New York City, Berlin, and London – Strychnin Gallery is a playground for artists from all around the globe. It is a place where collaboration is encouraged, new projects are constantly developed and creativity is the one and only thing that truly counts.Owned by charismatic curator Yasha Young, Strychnin is dedicated to presenting emerging American artists to the European art world and vice versa. It features a variety of artists with particular individual styles rather than artists belonging to a collective “hip” movement. If you insist on putting a label on them, try lowbrow turned highbrow, pop surrealism or fantastic realism among others.Founded in Brooklyn in 1998, the gallery opened a European showroom in Berlin in 2002. The US gallery has since moved to a location in Manhattan’s Chelsea district, opening with a group show featuring over 70 artists in October of 2006. Strychnin Gallery opened a third location in East London’s vibrant art scene right off of Brick Lane in October 2007.The gallery participates in major international art fairs on a regular basis, including Bridge Art Fair, Liste, or Art21 in Cologne, which appointed gallery owner Yasha Young to its selection committee in 2008.Strychnin Gallery Berlin Boxhagenerstr. 36 10245 Berlin GermanyPress contact Strychnin Gallery: Iris Bitter production@strychnin.com +49 30 9700 2035