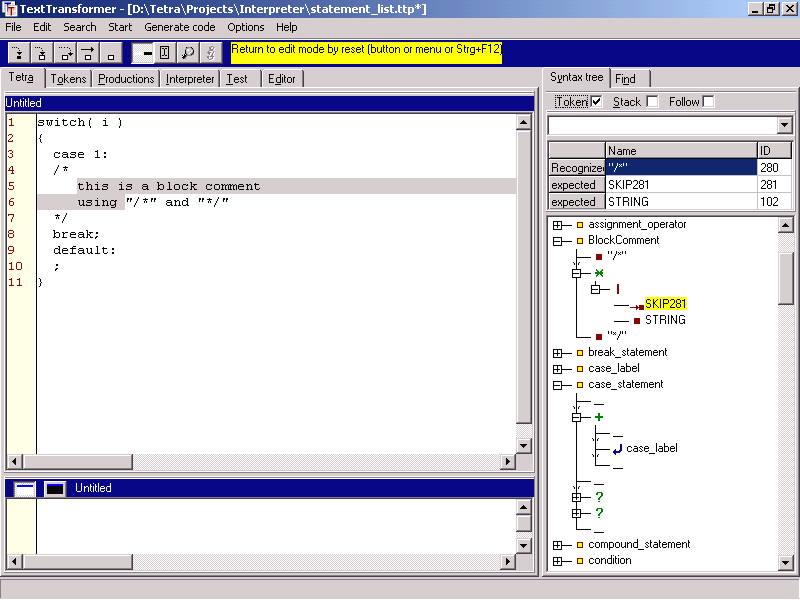 The abilities of TextTransformer for the analysis of texts are increased by the new possibility to parse text inclusions with separated parser sub-systems. Exemplary examples of text inclusions are comments in programming languages or XML processing instructions. Innumerable further possible applications for the new feature are conceivable. More and more frequently comments not only are used for a freely arranged internal documentation of programming code, but structured comments are used e.g. for the automatic production of an external documentation. Or content management systems use hidden markers in the comments, to produce a uniform web site design. To parse such embedded instructions, a sub-parser is needed, which has to be different from the main parser of the document. Two or more parsers can be combined in a single project in the TextTransformer. It is the common feature of comments and other text inclusions that they can appear in the text everywhere without destroying the complete structure of the text. TextTransformer generalizes the principle for the treatment of comments: it is possible in different sub-structures of the text to allow different inclusions and it is allowed too, to stack inclusions. (Nested comments are the simplest example of stacking.) In the visual development environment of TextTransformer you can test such sub-parsers in the same manner as used for the productions of the main parser: you can step through the nodes of the syntax tree, you can set breakpoints in the tree or in the source text and you can execute text transformations on single files or on groups of files. Parsing the text inclusions is made possible among others by a new, systematic concept for the change of lexical states: Text inclusions can be parsed with token sets, which are different from that of the main parser. This concept was extended to the other uses of productions already existing in the TextTransformer. Look-ahead productions, and productions for sub-parsers, callable in semantic actions, also can operate on own token sets now. TextTransformer does thus more than an ordinary parser generator: it produces not only a parser but also a whole system of parsers. Versions, prices and availability: The standard version (with transformation manager and extended interpreter) can be downloaded as a 30-day trial version under http://www.TextTransformer.com/downloads/TetraInst_en.exe . As soon as the test period has passed, the functionality is adapted to the free version. With the professional version of the TextTransformer a ready transformation program can be exported as c++ program code and so included into other software products. So the core of the TextTransformer is bootstrapping self. The standard version costs $ 98 and the professional version costs $ 394, both availably under http://www.texttransformer.com/Registration.39.0.html . In the free version the features of the standard version are restricted, however, it has almost all possibilities of analyzing texts and carrying out simple text manipulations. It can be downloaded here: http://www.texttransformer.com/downloads/TetraInst_en.exe Further information about the versions, the PDF manual etc., you find at: http://www.texttransformer.com/Downloads.27.0.html Further technical details on the IDE, the parser-generator, the interpreter, the debugger or code production (only the professional version) you find at: http://www.texttransformer.com/Technical_details.32.0.html Pictorial material like product logo and screenshot is in our press area under http://www.texttransformer.com/Press_service.87.0.html provided for you. -- About Dr. Detlef Meyer-Eltz Dr. Detlef Meyer-Eltz has been working for many years as software developer in different employments (measurement data evaluation, tabulation software, workflow application, artificial intelligence). He is an independent developer since 2002. After more than three-years of development version 1.0.0 of the TextTransformer could be published. PRESS CONTACT Detlef Meyer-Eltz Burggarten 16 20535 Hamburg Germany Fon: + 49 (0) 40 2513642 Mail: dme@texttransformer.com

You can edit or delete your press release Update: TextTransformer 1.1.0 here

02-22-2010 | IT, New Media & Software
Dr. Detlef Meyer-Eltz
Delphi2Cpp 1.2.0: converts Delphi code for compilers like Visual C++ or gcc now …
The program Delphi2Cpp was made to convert Delphi code to C++. The extended C++ of the CBuilder compiler was the primary target of the first version of Delphi2Cpp, which was published three months ago. With the new update this limitation is overcome, because optionally Delphi properties can be eliminated now. The use of "properties" is a fundamental language feature of Delphi, that makes it difficult to translate it to C++. Only
11-19-2009 | IT, New Media & Software
Dr. Detlef Meyer-Eltz
Delphi2Cpp 1.0.0: Converter from Object-Pascal (Delphi) to C++
The program Delphi2Cpp just has been released, which helps to translate the proprietary programming language Object Pascal - also called Delphi - into the widespread programming language C++. Delphi2Cpp saves all purely mechanical syntactical substitutions and rearrangements of the code in which the largest portion of the translation consists. A lot of more complex translation steps are executed too. However, in most cases a manual post-processing of the produced code will
12-08-2008 | IT, New Media & Software
Dr. Detlef Meyer-Eltz
TextTransformer 1.6.0: conversion of binary files
With TextTransformer 1.6.0 easy development of programs for the processing of binary files is possible now. This is possible because source files can be shown now not only as normal text, but as a binary text and in hexadecimal form too. Binary files are frequently used for the compact storage of data and - opposed to text files - contain many characters which aren't shown in a normal editor. These data
06-03-2008 | IT, New Media & Software
Dr. Detlef Meyer-Eltz
Conversion of arbitrary file formats to XML
TextTransformer supports XML as target format in a special way now. XML is of an eminent importance as it is a widespread standard for the exchange of data between different programs and systems. Moreover, further transformations can be done with XML files by means of XSLT. Therefore it is desirable to be able, as simply as possible, to convert arbitrary file formats to XML. With TextTransformer parsers (text-analyzer) can be

11-02-2018 | Advertising, Media Consulting, …
Thorsten Distler Creative Translations Sports and Games
Marketing: text type versus specialisation
Marketing: text type versus specialisation There are two types of marketing translations: on the one hand, there is the specialised variety during which marketing is considered objectively as a corporate field. On the other, there is marketing translation in the sense of transcreation. In other words: a marketing expert well-versed in economic principles and terms cannot automatically produce good texts or creative translations! And conversely, a translator capable of delivering hard-hitting copy
07-12-2017 | IT, New Media & Software
kbvresearch
Global Text Analytics Market Analysis
According to a new report Global Text Analytics Market (2017-2023), published by KBV Research, the global Text Analytics Market is expected to attain a market size of $10.2 billion by 2023, growing at a CAGR of 18% during the forecast period. The Software market dominated the Global Text Analytics Market by Component in 2016, and would continue to be a dominant market till 2023; and it is expected to witness a
09-13-2013 | IT, New Media & Software
GBG & Associates
What’s Trending Now? MVP’s CustomerCount Text Search
Online Feedback System Pulls Key Word/Key Phrase Information INDIANAPOLIS (September 9, 2013) – The CustomerCount online enterprise customer feedback management system now has even more capability to measure the quality of customer experience. Searching via key words and key phrases within Customer Count’s online survey results, managers have the capability to access specific customer feedback from the already comprehensive system. No longer exclusive to the hospitality industry, CustomerCount collects
03-28-2011 | IT, New Media & Software
Text Hi P/L
Text Hi Announces Text Greetings Cards
AUSTRALIA (March 2011) – Text Hi announces an innovative way to send greetings cards. These greetings cards may now be sent via text capabilities. Text Hi is a company that recognises how much people text and are now providing greetings cards texting ability. Text Hi offers several kinds of greetings cards. These greetings cards can be for any special occasion. The special occasions include birthday for a boy or girl, the
09-25-2008 | Advertising, Media Consulting, …
Text Internet Marketing
Text Clients Conquer Chrome
Many businesses are missing out on potential online revenue because their websites are not compatible with Google's new web browser Chrome. Moving with the trend, Text Internet Marketing's websites and content management systems (CMS) are fully compatible with the new browser which was released earlier this month. Currently, Internet Explorer is the most commonly utilised web browser boasting a 74% share of the market, Mozilla Firefox takes second place with a
12-17-2007 | Business, Economy, Finances, B …
SherpaHost.com
SherpaHost Makes Text Messaging Easier
SherpaHost.com Offers Short Message Service (SMS) Las Vegas, NV – SherpaHost has announced a new enhancement to its Web-based email product—short message service (SMS) integration, also called text-messaging service. The new feature lets subscribers to SherpaHost’s Web-based email instantly send text messages, as well as standard email. With the texting feature in SherpaHost’s Webmail, users can instantly send emails and text messages at the same time----from a desktop PC
Comments about openPR
We publish our press releases on openPR.de because we like people who are "open" - just like us.
Frank Obels, CEO, INCONET - Informationssysteme, Communication und Netzwerkberatung GmbH