Delphi2Cpp 1.2.0: converts Delphi code for compilers like Visual C++ or gcc now too 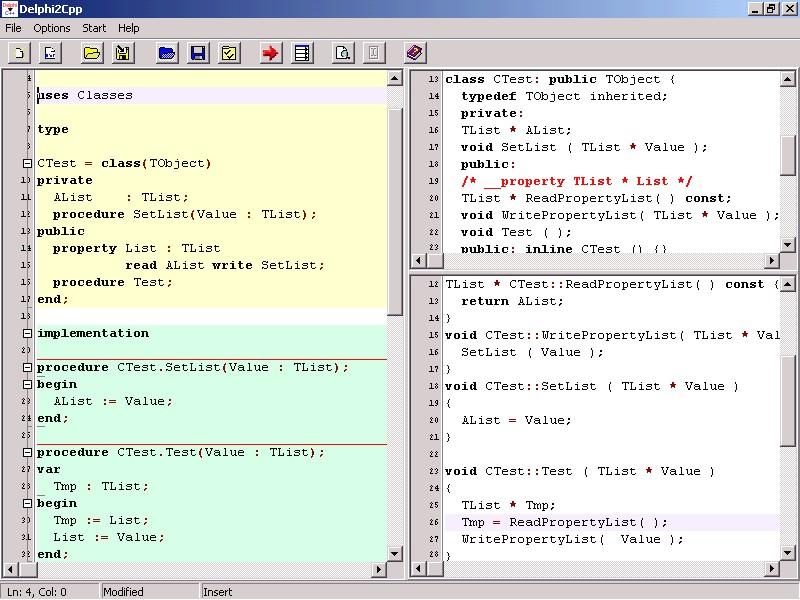 The program Delphi2Cpp was made to convert Delphi code to C++. The extended C++ of the CBuilder compiler was the primary target of the first version of Delphi2Cpp, which was published three months ago. With the new update this limitation is overcome, because optionally Delphi properties can be eliminated now.The use of "properties" is a fundamental language feature of Delphi, that makes it difficult to translate it to C++. Only in the special CBuilder-C++ has a counterpart for this feature. The new version of Delphi2Cpp can eliminate these properties automatically. They can optionally be replaced by couples of functions: one function for reading the property and another function for writing the property. Depending on the kind of access to a property, it is replaced by the one or the other function in the code. So the translation of the code is possible not only for the rarely used CBuilder but also for the widespread Windows Visual C++ Compiler and Linux gcc. Furthermore Delphi2Cpp 1.2.0 offers the possibility of preparing translation tables. With the translation tables the notations of identifiers are determined in the generated C++ code. In Delphi the notation of an identifier doesn't matter, in C++ however, the identifiers are case sensitive. Till now, the notation found by chance first was taken as a standard notation. By means of the translation tables desired notations can be fixed from the beginning. In addition, it is possible with these tables to rename identifiers completely, so that e.g. the calls of special Delphi functions are replaced by calls of C++ functions named differently.Finally the quality of the translation result is increased considerably in Delphi2Cpp 1.2.0 compared with the first version of this program. Still a manual post-processing of the generated C++ code can be required now and then. For the code generated with the current version, however, such cases are much rarer than before.For more information, visit www.texttransformer.com/Delphi2Cpp_en.htmlDr. Detlef Meyer-Eltz has been working for many years as software developer in different employments (measurement data evaluation, tabulation software, workflow application, artificial intelligence). He is an independent developer since 2002 and specialized on all kinds of text remodeling: text analysis, text extractions, text replacements and text conversion: e.g. log file analysis, data file conversions, source to source translations etc.Detlef Meyer-Eltz Burggarten 16 20535 Hamburg Germany Phone: 4940 2513642

You can edit or delete your press release Delphi2Cpp 1.2.0: converts Delphi code for compilers like Visual C++ or gcc now too here

11-19-2009 | IT, New Media & Software
Dr. Detlef Meyer-Eltz
Delphi2Cpp 1.0.0: Converter from Object-Pascal (Delphi) to C++
The program Delphi2Cpp just has been released, which helps to translate the proprietary programming language Object Pascal - also called Delphi - into the widespread programming language C++. Delphi2Cpp saves all purely mechanical syntactical substitutions and rearrangements of the code in which the largest portion of the translation consists. A lot of more complex translation steps are executed too. However, in most cases a manual post-processing of the produced code will
12-08-2008 | IT, New Media & Software
Dr. Detlef Meyer-Eltz
TextTransformer 1.6.0: conversion of binary files
With TextTransformer 1.6.0 easy development of programs for the processing of binary files is possible now. This is possible because source files can be shown now not only as normal text, but as a binary text and in hexadecimal form too. Binary files are frequently used for the compact storage of data and - opposed to text files - contain many characters which aren't shown in a normal editor. These data
06-03-2008 | IT, New Media & Software
Dr. Detlef Meyer-Eltz
Conversion of arbitrary file formats to XML
TextTransformer supports XML as target format in a special way now. XML is of an eminent importance as it is a widespread standard for the exchange of data between different programs and systems. Moreover, further transformations can be done with XML files by means of XSLT. Therefore it is desirable to be able, as simply as possible, to convert arbitrary file formats to XML. With TextTransformer parsers (text-analyzer) can be
11-06-2007 | IT, New Media & Software
Dr. Detlef Meyer-Eltz
Debugging look-ahead productions
The possibilities for the visual analysis of texts have been extended to the look-ahead analysis in the TextTransformer 1.4. TextTransformer is a development environment for the analysis and automatic evaluation and remodelling of texts. At the analysis of a text disambiguation, i.e. the choice between alternative interpretations, can depend on sections of text which follow at later positions. E.g. the meaning of a letter can depend on the signature, or