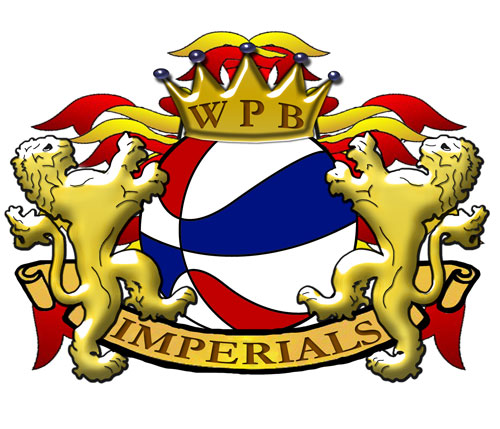 West Palm Beach - Today the Palm Beach Imperials Announced that they will be hosting their first ever tryouts for the 2006-2007 inaugural season starting March 29 at the Athletic Club of Boca Raton. Additionally, the Imperial Girl Dance team tryouts will be held starting March 30 at the Athletic Club of Boca Raton. This 3-day basketball pro tryout camp begins, Wednesday morning, March 29-31, 2006. Players will be flying in from around the country as well as arriving locally for the tryout. "This is the start of something very special," stated Lamont Carr, the team's Head Coach and General Manager, "We are looking to put together a real team, that will bring a team oriented flavor of professional basketball to the people of South Florida." There will be a Mandatory Player Orientation Meeting on Tuesday, March 28, 2006 from 5:30pm to 6:00pm. Players will be tested in a multitude of basketball skills including athletic conditioning, decision making, court leadership, and academic knowledge of basketball. The 2-day Imperial Girl dance team tryouts will begin Friday afternoon, and will be headed up by Imperial Girls Director, Leslie Boers. “We want to make the Imperial Girls the most well trained, technically precise, and entertaining dance group in all of South Florida. I believe that we can find the talent to do so,” expressed Boers, who most recently was a choreographer for the NBA’s (National Basketball Association) Orlando Magic. All female dancers are welcome to tryout and are required to bring a crop top, fitted shorts or pants, dance shoes, performance make-up, a 5 X 7 head shot, and a resume to the orientation. There will be a $25.00 registration fee Dancers will be asked to perform a technical & hip hop routine, with gymnastic skills being a plus. The Palm Beach Imperials are shaping up to be on of the premier franchises for the American Basketball Association next year. "We are very pleased with the progress of our organization and our team," stated Dan Mangru, one of the team's owners, "The quality of personnel that we have is impeccable and we are looking at professional ABA basketball from a realistic standpoint." Once the team is assembled, the Imperials will start scrimmages against other collegiate and minor league basketball teams. The Palm Beach Imperials are currently owned by the Imperiali Organization (www.imperiali.org) If there are additional questions on the Imperial Girls, please contact Leslie at Leslie@PalmBeachImperials.com or phone 407-232-4207 If there are additional questions on the Imperials Basketball tryouts, please contact Josh Yager at josh@PalmBeachImperials.com or phone 561-376-9091 About Palm Beach Imperials (www.palmbeachimperials.com) The Palm Beach Imperials are Palm Beach's and Treasure Coast's only professional basketball team. The team looks to bring the worlds of music, entertainment, family and basketball to create a unique product for its fans. Currently the Palm Beach Imperials have created an impressive management group of former music executive, merchandising executives, former basketball players, international businessmen, and the 2008 Independent Presidential Candidate Daniel Imperato (www.daniel2008.com). About Imperiali Organization Imperiali Organization (www.imperiali.org) is global development company, with diversified assets and holdings, connecting the leaders of tomorrow today. Currently the organization has taken interest in both in owned and operated businesses in the areas of internet search, public relations, merchandising, publishing, film, and sports as well as other non-affiliated companies. The Imperiali Organization is currently the official communications provider for Imperato For President 2008, www.daniel2008.com . Safe Harbor Statements under the Private Securities Litigation Reform Act of 1965: Those statements contained herein which are not historical are forward-looking statements, and as such, are subject to risks and uncertainties that could cause actual operating results to materially differ from those contained in the forward-looking statements. Such statements include, but are not limited to, certain delays that are beyond the Company's control, with respect to market acceptance of new technologies, or product delays in the testing and evaluation of products, and other risks, as detailed in the Company's periodic filings with the Securities and Exchange Commission. For Press Inquires Contact: i1connect 561-305-0519 info@i1connect.com www.i1connect.com

07-02-2020 | Business, Economy, Finances, B …
Imperial Finsol Pvt.Ltd.
Mutual Funds Investment App By Imperial Money
It’s all just on fingertips, No paperwork, No hassles, Invest in the best mutual funds using Imperial Money. All Indian mutual funds are available in one single app. In Imperial money you can start SIP, lump-sum investment for free. Switching of the funds from one fund to other fund and Systematic withdrawal plan or funds from liquid to equity or equity to liquid while re-balancing of the portfolio you can
03-15-2019 | Industry, Real Estate & Constr …
Lee Spring Ltd
Lee Spring – a worldwide supply chain in metric and imperial
Lee Spring have found that for ease of specification and sourcing, design engineers often select their measurement units to match local standards, or otherwise those used by the design department or the manufacturing facility. This simple choice at an early stage can make life a lot easier for all concerned and reduce unforced errors of transcription – saving time, saving costs. So, to make life even easier and ensure engineers/buyers have
10-10-2018 | Advertising, Media Consulting, …
HTF Market Intelligence Consulting Pvt. Ltd.
Cigarettes Market Is Booming Worldwide | BAT, JTI, PMI, Imperial
HTF Market Report released a new research document of 96 pages on industry titled as 'Cigarettes in Spain, 2017’ with detailed analysis, Competitive landscape, forecast and strategies. The study covers geographic analysis that includes and important players/vendors such as BAT, JTI, PMI, Imperial, Altadis The report will help you gain market insights, future trends and growth prospects for forecast period of 2016-21 Request a sample report @ https://www.htfmarketreport.com/sample-report/262593-cigarettes-in-spain-2017 ""Cigarettes in Spain,
11-08-2017 | Associations & Organizations
Bossescabin
Imperial: An epitome of luxurious Conference tables High-quality Imperial confer …
The first impression of the client meeting will starts from the conference room. The conference room of the office will be the hub of bright, new ideas and a space to facilitate a meeting of the minds. The conference table is an important aspect of a meeting or discussion. It’s simply not a surface area to place the laptop/pen, but also a table to dictate the seating placement which can
05-22-2017 | Fashion, Lifestyle, Trends
Marketing Pro-Junction
Ritu Kumar Presents 'Imperial Summer'
Greet the summer in this colourful, rich and exquisite collection from Ri-Ritu Kumar. With vibrant summer shades of pink, yellow, turquoise and orange, the prints are luxurious and draw from deep Indian craft traditions. Benaras inspired weaves can be seen, along with Kacchi prints and Kashmir inspired Kashida shawl motifs. There is also ari work, delicate thread embroidery, floral prints and interesting silhouettes, all shimmering with a sense of vibrancy.
04-25-2012 | Business, Economy, Finances, B …
RSL Funding, LLC
Texas Courts Again Reject Imperial Finance’s Anti-Competitive Acts
Texas courts1 have once again rejected Imperial Finance’s continued attempts to stifle competition and harm consumers. Houston, TX, April 25, 2012 -- Texas courts1 have once again rejected Imperial Finance’s continued attempts to stifle competition and harm consumers. A Texas court this month slammed for the fifth time Imperial’s anti-consumer attempts to prohibit customers from selling their structured settlements to persons other than Imperial. Imperial sought to prohibit its customers from
Comments about openPR
We publish our press releases on openPR.de because we like people who are "open" - just like us.
Frank Obels, CEO, INCONET - Informationssysteme, Communication und Netzwerkberatung GmbH