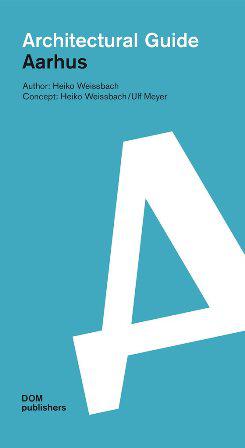 Aarhus may be only the second biggest and second oldest city in Denmark, but this 330,000 inhabitant city in Jutland is home to country's oldest university. Many who have studied there end up staying – there must be a reason. It is worth taking a closer look at this city that lays in the shadow of Copenhagen – especially now, since it is the 2017 European Capital of Culture.In addition to presenting key buildings of the twentieth century, the Architectural Guide Aarhus also introduces spectacular buildings of the recent period and the near future. Ten geographic tours lead to 135 buildings and projects of the last hundred years: from the city hall (Arne Jacobsen and Erik Møller) to cultural buildings such as the ARoS Aarus Art Museum (Schmidt / Hammer / Lassen and Olafur Eliasson), from the city centre to the university (CF Møller), from the new harbour front to the "Eutopia" project, which should transform the ghettoised satellite town of Gellerup into a vital and integrated part of the city – a task that many cities are currently faced with. Complementary essays by five Danish guest authors provide background knowledge on the city's history, neighbourhoods, and significant architects who have made Aarhus a European architectural metropolis, and not only since 2017, the year of the Capital of Culture. For architecturally, Aarhus is anything but provincial. Internationally known, long-established, as well as young and innovative offices have their headquarters here; for example C.F. Møller, Schmidt / Hammer / Lassen or CEBRA. The city of knowledge and education also has a prestigious architecture school that enables Aarhus to have the largest architectural heritage in Denmark as well as take care of the necessary urban development and architectural planning – for this city, which is also flirting with the issue of being the "smallest metropolis of the world", is incessantly growing. The largest urban development potential is currently offering large sections of the former port areas, which allow the city centre to expand to the water's edge.This Architectural Guide is aimed at all those who want to envision the cultural capital as well as get an overview of its outstanding architecture.Heiko Weissbach Architectural Guide Aarhus 135 x 245 mm, 336 pages 600 pictures, Softcover ISBN 978-3-86922-561-6 (English) ISBN 978-3-86922-562-3 (Danish) EUR 38.00 May 2017. DOM publishers, BerlinThe Architectural Guides by DOM publishers are handy travel companions for readers interested in architecture and culture. Projects are carefully selected and researched to make each individual book a ready work of reference, while background information and attractive design inspire armchair travellers to imaginary journeys. In 2014, the series was awarded with the “Iconic Award” by the German Design Council, in 2016 with the “German Design Award Special”, and in 2017 with the ITB BookAwards. Further information: www.dom-publishers.comgisela graf communications supports publishers, museums and institutions specialising in architecture, design or art, with professional press and PR work, also on an international level. Communications — Individual concepts and texts for media relations Connections — Media contacts, interview arrangements, events — anything that brings people and subjects together Corrections — Editing and copy editing of texts and specialised publications, catalogues and brochuresgisela graf communications Gisela Graf Schillerstr. 20 D 79102 Freiburg T +49 761 791 99 09 F +49 761 791 99 08 contact@gisela-graf.com www.gisela-graf.com