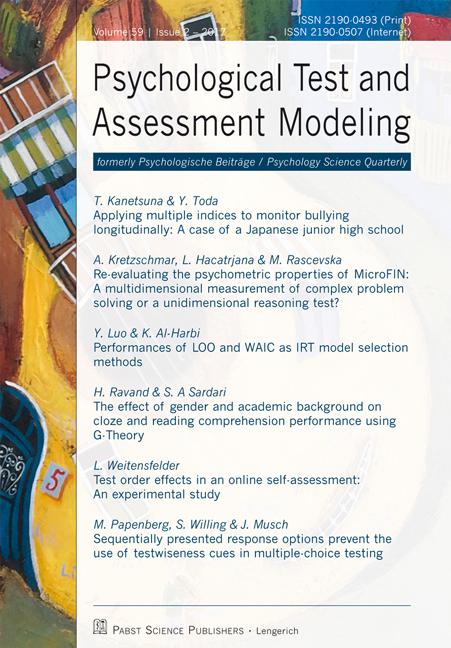 Psychological Test and Assessment Modeling: Japanese Scientists demonstrate the multiple ways to monitor the condition of bullying in a whole school level as well as year group and class levels by using traditional index of the change in number of reported bullying/victimization, in conjunction with new indices of the bully/victim ratio and the number of helpless victims. "The study showed that along with the traditional index, by applying these new indices to monitor the prevalence and severity of bullying in different levels, we managed to have alternative views for the interpretation of the condition which enable schools and teachers to detect certain units of students that might face with a more serious situation than others, and this in turn enables them to detect and to intervene those silent helpless victims.Along with the monitoring of the condition of bullying in different levels, antibullying activities were implemented by the student committee to raise antibullying attitudes among students as well as teachers and other school staffs, and it was also examined how this affects the condition of bullying. Although the antibullying activities were conducted on a whole-school basis, there were considerable differences in its effects between classes and year groups, which may due to the time and effort students put into the activities...">> Tomoyuki Kanetsuna, Yuichi Toda: Applying multiple indices to monitor bullying longitudinally: A case of a Japanese junior high school. Psychological Test and Assessment Modeling, Volume 59, 2017 (2), 135-156 http://www.psychological-test-and-assessment-modeling.comPabst Science Publishers (Lengerich/Westfalen) veröffentlicht zehn psychologische und neun medizinische Fachzeitschriften; darüber hinaus erscheinen bei Pabst aus den gleichen Fachbereichen mehr als hundert Bücher jährlich - teils wissenschaftliche Spezialtitel, teils allgemeinverständliche Fachliteratur.Pabst Science Publishers Eichengrund 28 49525 Lengerich Tel. 05484-308 Fax 05484-550 Internet: www.pabst-publishers.de / www.psychologie-aktuell.com

06-04-2019 | Health & Medicine
Pabst Science Publishers
Health literacy: How to improve health behaviors
Health literacy is defined as "people´s knowledge, motivation and competences to access, understand, appraise and apply information to make judgements and take decisions in everyday life healthcare concerning disease prevention and health promotion to maintain and improve quality of life during the life course." In a new volume Anne-Kathrin Mayer and colleagues shed light on the concept of health literacy from different disciplines: psychology, educational sciences, health sciences and
04-30-2019 | Health & Medicine
Pabst Science Publishers
Health literacy: how to improve the advantages and to reduce the risks
The new volume "Health literacy across the lifespan" stresses the importance of health literacy for changing multiple health-risk-factors. Anne-Kathrin Mayer and colleagues shed light on a concept from different disciplines: psychology, educational sciences, health sciences and public health, communication sciences, and information sciences. It is undisputed that health is strongly influenced by individual efforts aimed at the promotion of health and the prevention of illness or recovery from diseases. These
11-13-2017 | Health & Medicine
Pabst Science Publishers
Directed deceased donation: beyond the impartial allocation system
"Within a pluralistic account of morality, partial values have a merit of their own and should be assessed in their own terms. These values are extremely relevant in the field of organ transplantation, but are misunderstood at a political level where partiality is put at par with injustice, and where fairness is exclusively taken as impartial justice." Dr. Medard Hilhorst (Erasmus Medical University Rotterdam) argues "that partial values are fundamental
10-23-2017 | Health & Medicine
Pabst Science Publishers
Transplantation: Prisoners are killed for their organs in China
Transplantation: China is the only country in the world systematically using organs from prisoners for transplantation, Professor Huige Li reports. For over 40 years, executed prisoners were used as the main organ source in China. It´s a profitable international business. A number of Chinese Hospitals claimed that they could provide liver transplants in the time range between 3 to 30 days. The report appeared in "Ethical, Legal and Psychosocial Aspects