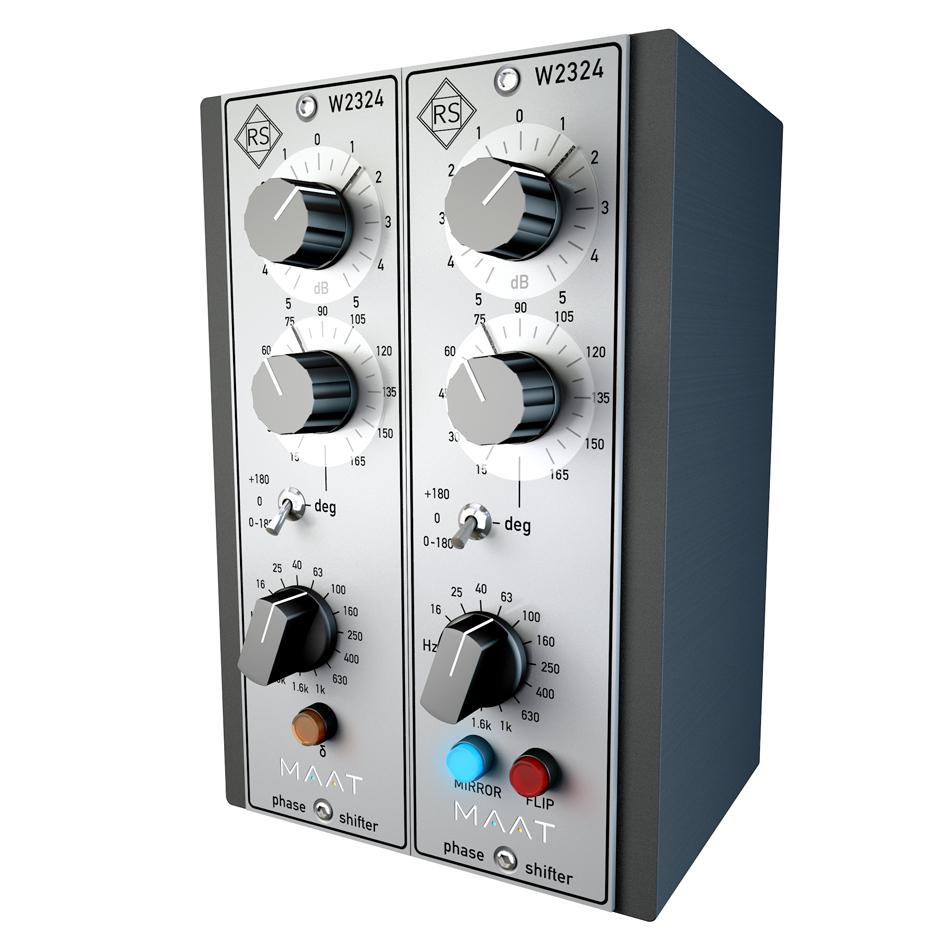 Company announces release of a digital recreation of Roger Schult’s analog hardwareMAAT Incorporated, a manufacturer of exceptional performance professional audio solutions, today announced the release of RSPhaseShifter version 1.0, a digital implementation of the Roger Schult/German Audio Lab’s Phase Shifter 500 Series W2324 hardware. The cross–platform plug–in creates a high quality, phase shifted version of a monaural or stereo input.Available in formats for all major DAWs (Digital Audio Workstations), RSPhaseShifter incorporates double precision internal processing, and algorithms optimized for highest fidelity. Providing a fast, convenient means of aligning individual mix elements for best subjective results, RSPhaseShifter also offers a delta mode, to preview isolated audio reflecting only the content that has been altered by signal processing. This extends the application to the control of frequency–dependent stereo spread for MS workflows.Product features include very high resolution, realtime adjustment of resonant frequency, gain compensation, and phase angle from 15 to 360°. MIRROR and FLIP modes speed the selection of two channel settings, while the compact layout of the UI, which echoes the original W2324 module, is crafted for low visual fatigue. Sample rates from 44.1 to 384 kHz are supported, as is the AU format along with VST2/VST3 and AAX plug–in formats for macOS and Windows.RSPhaseShifter was created in conjunction with Roger Schult/German Audio Lab, and is a painstaking, 64 bit digital realization of Schult’s trusted Phase Shifter W2324 analog module, not a model or simulation. RSPhaseShifter’s analog–style controls are the same as those found on the W2324 hardware, with improvements only available in the digital domain.Creating a high fidelity, phase shifted version of the input, RSPhaseShifter provides a fast, convenient and musical means of aligning individual mix elements for best subjective results. Friedemann Tischmeyer, President and co–founder of MAAT Inc., said that “…key differentiators are accuracy of the signal processing, and musicality of the result. When multiple sources compete rather than complement, RSPhaseShifter should be the choice for a fast, intuitive, easy to use and effective remedy.” Tischmeyer pointed out that the clean output was part of the design. “This tool’s value is more about what it does (phase manipulation)…so we left out stuff like fake transformer color, hum or Johnson Noise. There are lots of colorful plug–ins, we simply provide convenient access to the useful functionality along with a classic API Lunchbox look.”Basel–based Blessed State Mastering specializes in transparent and accurate handling of client’s work, in keeping with the Swiss penchant for precision. Founder Patrick Stauffer is always on the lookout for top shelf gear, and the qualities he found in RSPhaseShifter align with his exacting values. “I am amazed about the possibilities offered by the RSPhaseShifter,” Stauffer said recently. “I use it for my mastering and it magically opens up problem songs, with super sweet highs. I would pay twice as much for that tool! Thumbs up!”RSPhaseShifter is affordably priced and available now, exclusively at MAAT’s web site. For images, specifications and additional information, visit MAAT dot Digital on the web.©2017 MAAT Incorporated. The MAAT logo and RSPhaseShifter are trademarks of MAAT Incorporated. All other company and product names are trademarks of their respective owners.MAAT Incorporated, a manufacturer of exceptional fidelity professional audio solutions, is built on the belief that higher accuracy, enhanced workflows and less visual fatigue are hallmarks of better quality. MAAT is derived from “Mastering Academy Audio Tools,” reflecting the deep connection and practical wisdom derived from years of practical experience. MAAT’s reliance on hard science and in–depth research balanced by extensive listening redefines audio tools for professionals worldwide.MAAT Inc. 101 Cooper St Santa Cruz CA 95060