MAAT Gets Rad With FiDef 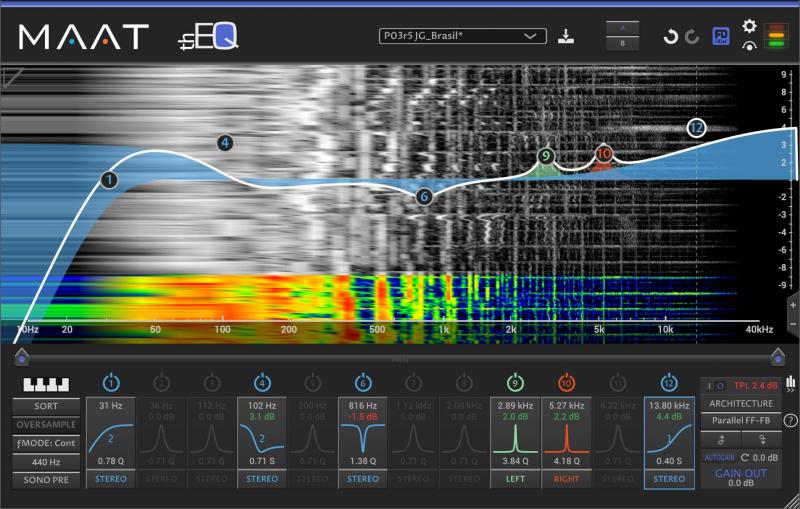 MAAT Incorporated, a manufacturer of exceptional performance professional audio solutions, today announced the release of thEQblue version 3.0, a cross–platform plug–in for correction and aesthetic equalization of all content including music, motion picture and game audio. The new version includes a world’s first, the addition of the exclusive FiDef® digital audio process.Available for select workstation platforms, thEQblue v3 builds on the proven foundation of MAAT’s celebrated original, while bringing a new layer of subtle refinement to the already reference quality minimum phase equalizer. FiDef is a proprietary psychoacoustic process, developed in cooperation with neuroscientists and DSP experts, that activates a receptive listener’s subconscious. It makes digital audio content more compelling and brings audiences closer to the emotion of the music.Since its introduction, both thEQblue and FiDef have been embraced by the top echelon of audio professionals as well as the masterminds at MAAT. Friedemann Tischmeyer, one of MAAT’s co–founders, was an early proponent of the FideliQuest magic. “We all know it intuitively,” Tischmeyer stated, “but your brain really does hear more than you might think.” He quipped that “…clients love it…we have put my outboard gear on notice!” FiDef itself has found a home in the workflows of prominent practitioners, from producer extraordinaire Gary Katz, to legendary engineers Elliot Scheiner and Frank Filipetti. Filipetti emphasized the potential of FiDef when he stated that it brings out, “…the best of the mix and the emotion of the mix…extremely effectively.” Al Schmitt, engineer emeritus, sums it up neatly with the sentiment that, “It (FiDef) doesn’t do anything except sound better.”MAAT’s thEQblue plug–in is delivered in all modern formats, including cross–platform AAX, VST 2 and VST 3 as well as AU for macOS. Perpetual licenses for thEQblue are available in two tiers; thEQblue6 offers six popular series equalizer Architectures, while thEQblue12 extends the license to include the entire set of all ten series plus two additional parallel Architectures. Images and additional information, including user manuals and videos, are accessible anytime at www.maat.digital on the web.MAAT Inc. 101 Cooper St Santa Cruz CA 95060About MAAT Inc. MAAT Incorporated, a manufacturer of professional audio solutions, is built on the belief that higher accuracy, exceptional fidelity, enhanced workflows and less visual fatigue are hallmarks of better quality. MAAT is derived from “Mastering Academy Audio Tools,” reflecting the deep connection and practical wisdom derived from years of real world experience. MAAT’s reliance on hard science and in–depth research balanced by extensive listening redefines audio tools for professionals worldwide.About FideliQuest Inc. FideliQuest Incorporated, a digital solutions provider for entertainment, broadcast, therapeutics, education and advertising, creates essential technology for the world’s top media professionals. Its novel, far reaching family of algorithmic products add life to sound by informing the human auditory system in a pleasant and positive way. The company is the sole provider of FiDef® professional audio products as well as OEM, broadcast and medical solutions. Comprised of a management team with more than four decades of experience in advanced technology verticals, the Minnesota–based company is committed to ensuring that our lives and well being are improved through audio.

03-09-2022 | IT, New Media & Software
MAAT Labs GmbH
MAAT Debuts Targeted Subliminal Audio Processor
Company releases dedicated plug-in for the psychoacoustic enhancement of audio content MAAT Labs, a manufacturer of exceptional fidelity professional audio solutions, today announced the introduction of their second generation FiDef JENtwo professional audio software. The new product is the culmination of a seven-year journey to bring a fundamentally new and novel tool for audio enhancement to wider audiences. In close collaboration with FideliQuest Incorporated, FiDef JENtwo is a 64 bit audio plug-in
Comments about openPR
OpenPR is clearly structured and remains true to its principle of confining itself to the essential parts. OpenPR has proven to be a very good and reliable partner to our media agency: Within the shortest time the releases are online and go down well with the media representatives. The success of OpenPR is reflected in the steadily increasing number of press releases. It is good that OpenPR exists!
Ursula Koslik, Director Marketing & PR, F+W Hamburg