FED Publishing Releases New Book, "Rumbles from the Ocean: It's Time to Wake Up" by Ben Korgen 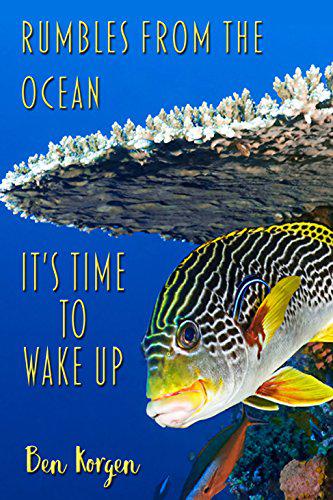 Rumbles from the Ocean: It's Time to Wake Up, by Ben Korgen, enlightens and teaches about a complex subject and deals with the "what should we do?" problem concerning our world's oceans in today's changing climate.Providence, RI, USA -- Ben Korgen's Rumbles from the Ocean: It's Time to Wake Up is an introduction to the world ocean for those with their hearts in the humanities, curiosity in science and concerns about the environment.This warm-hearted introduction to the world ocean and its solvable problems is accessible for readers without specialized backgrounds in science, mathematics or statistics. The author focuses on how the world ocean functions normally, what has happened to it in recent years and what humans can do to help the oceans recover from its wounds and prosper far into the future.He writes in ways that cause readers to feel he is talking directly to each of them one-on-one. Although the book's believability is based on scientific research, it has a palpable flavor of the humanities. To enrich the book's explanations, the usual two-dimension illustrations found in other non-fiction books are replaced by browser addresses that jump readers directly into the rich collection of internet still images, animations, demonstrations and at sea videos.Author Ben Korgen has had a highly varied career. He served in the US Navy, earned a bachelor's degree at the University of Minnesota Duluth, earned a master's degree at the University of Michigan in Ann Arbor, then coached high school football, earned a PhD in Oceanography at Oregon State University and had a long and rewarding career in Oceanography at the US Naval Oceanographic Office, the University of North Carolina in Chapel Hill and Tulane University in New Orleans.Genre - earthquakes, tsunamis, gyres, upwelling, biomass, dolphins, waves, currents, interactions, tectonicsThe ebook version of Rumbles from the Ocean: It's Time to Wake Up ISBN 9781506903538, published by First Edition Design Publishing (http://www.firsteditiondesignpublishing.com), is available on-line wherever ebooks are sold.About First Edition Design Publishing First Edition Design Publishing (aggregator) formats, converts and submits your book to over thousands of eBook and POD (PRINT) distribution points worldwide and to the top internet retailers including but not limited to - Apple, Amazon, Barnes & Noble, Kobo, Google, Ciando, e-Sentral, EBSCO and more.Media Contact: First Edition Design Publishing PO Box 20217, Sarasota, FL 34276 +1(941)921-2607 sales@firsteditiondesign.com http://www.firsteditiondesignpublishing.com

You can edit or delete your press release FED Publishing Releases New Book, "Rumbles from the Ocean: It's Time to Wake Up" by Ben Korgen here