Strychnin Gallery London and Resistance Gallery present: A Basement of Dolls – New Works in Oil by Suzzan B. 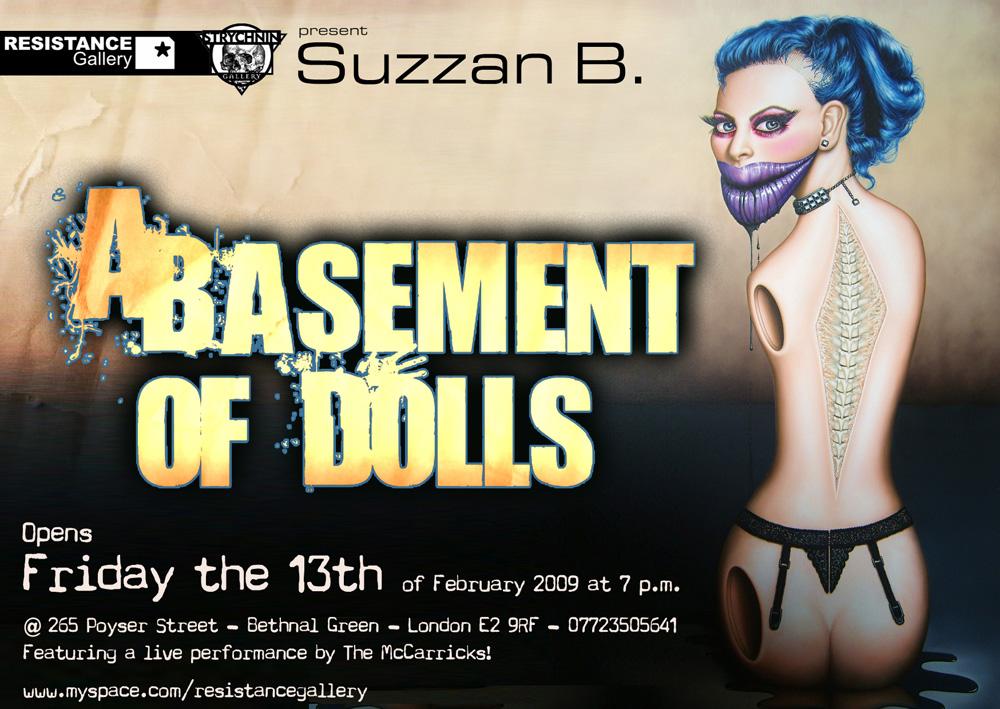 In colaboration with STrychnin Gallery, Suzzan B. will be exhibiting at Resistance Gallery in London.

Opens February 13th, 2009, at 7 p.m. at Resistance Gallery in London, featuring a live performance by The McCarricks.

Interested in psychology, physiognomy and body language, works by British painter Suzzan Blac are not for the faint of heart. Negative feelings, pain, anger and frustration are the motives behind them, often making them uncomfortable to look at through their intense, direct expression of strong emotions. Blac is interested in the darker aspects of human feeling: her latest series of paintings, to be seen at Strychnin Gallery’s new London collaboration partner Resistance Gallery, is about the sexual and social conditioning and exploitation of females.
Suzzan Blac loves the colour, translucence and mobile quality achieved by painting in oils. Using only her imagination, she starts all of her work with a blank canvas and a subconscious doodle, creating intense images by channeling her own emotions and by reflecting the viewer’s mind into her work: laughter, repulsion or amazement, sometimes all combined into one. She considers herself a surrealist through whose art we can observe the innermost thoughts of another human being without feeling intrusive, and thus have the capacity to connect, identify and react to the universal insights that can be found in her paintings.
Her latest series of works deals with the pressure exerted upon women by the media to conform to outside standards of beauty and physical perfection, as well as social conditioning to become beautiful ornaments and sexual objects, all of which can result in detrimental effects such as eating disorders, dangerous plastic surgery, and lack of self-worth brought on by feelings of inadequacy, especially in young girls and teenagers. Focusing on the realm of pornography with Playboy merchandise aimed at girls as young as eight, Blac questions the effect the industry may have on the personal development of these young minds, and consequently on their adult personalities.

“A Basement of Dolls” depicts women with mutilated bodies adorned with lingerie and other stereotypical visuals of a sexualized point of view, such as exaggerated lips, doll’s bodies or stylized reproductive organs, vividly colored hair and overdone make-up. They call attention to our concepts of beauty and also of intimacy, causing us to question our own ideals regarding beauty and gender, and those imposed upon us by the media and society.

With galleries in three bustling hotspots – New York City, Berlin, and London – Strychnin Gallery is a playground for artists from all around the globe. It is a place where collaboration is encouraged, new projects are constantly developed and creativity is the one and only thing that truly counts.

Owned by charismatic curator Yasha Young, Strychnin is dedicated to presenting emerging American artists to the European art world and vice versa. It features a variety of artists with particular individual styles rather than artists belonging to a collective “hip” movement. If you insist on putting a label on them, try lowbrow turned highbrow, pop surrealism or fantastic realism among others.

Founded in Brooklyn in 1998, the gallery opened a European showroom in Berlin in 2002. The US gallery has since moved to a location in Manhattan’s Chelsea district, opening with a group show featuring over 70 artists in October of 2006. Strychnin Gallery opened a third location in East London’s vibrant art scene right off of Brick Lane in October 2007.

The gallery participates in major international art fairs on a regular basis, including Bridge Art Fair, Liste, or Art21 in Cologne, which appointed gallery owner Yasha Young to its selection committee in 2008.

You can edit or delete your press release Strychnin Gallery London and Resistance Gallery present: A Basement of Dolls – New Works in Oil by Suzzan B. here