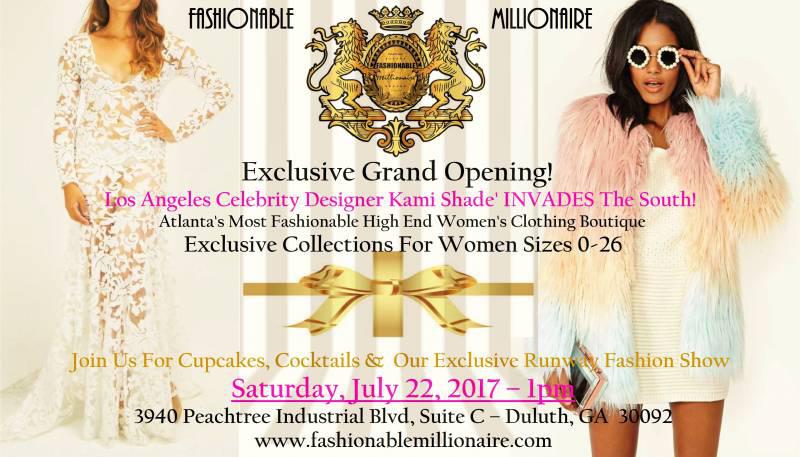 FOR IMMEDIATE RELEASELos Angeles Celebrity Designer Kami Shade' Opens An Exclusive New Boutique In One of The Hottest New Atlanta Suburbs!Fashionable Millionaire is a High Fashion Women's Clothing Boutique Specializing in Sizes XS-4XAtlanta, Georgia (July 19, 2017) – Designer Kami Shade' reigned in the Los Angeles Fashion Industry from 2004 to 2016. The creator of the Celebrity magent “Hollywood Shop Til' You Drop” Shopping event which garnered attendance by some of Hollywood's top talent including Terrance Howard, Taraji P. Henson, Anothoy Anderson, Mario Lopez, MC Lyte, Victoria Justice, Tisha Martin-Campbell just to name a few. Shade's clothing brand impacted a slew of Hollywood red carpets which she was known for her plunging necklines and most talked about vintage inspired swimwear line worn by Rhianna, Sharon Stone and Lauren Conrad.Kami Shade' recently closed her retail store locations on Melrose Ave and Sunset Blvd leaving the fashion industry buzzing on what she would do next. Fast forward a year later, the mom of five, uprooted her family to Atlanta, Georgia to live what some would say would be a simple life from all of the Hollywood action. Simple life lasted for about a year, the the passion came calling full fledged. Continuing the success of her popular online store “Kami Shade' – just last year reached the one million visitor mark for the year of 2016. “I went our shopping one day and noticed I had to drive so far and fight traffic to just to go Lenox Mall for a quick little black dress. If I hate traffic, I'm sure many other women feel the same way”. Of course, Kami Shade' immediately knew the solution. She has planted her fashion roots right in the heart of Duluth, Georgia where a mass of celebrity clientele call home. Under construction for the past few months, the glamorous retail location sprouted on Peachtree Industrial Blvd with Glitzy sparkles in the window and a huge neon chic sign that claimed the attention of the city.The grand opening soiree of Fashionable Millionaire will commence this Saturday, July 22, 2017 at 1pm. An Exclusive Fashion Show will held while guests mix and mingle with a delights of cupcakes and cocktails. The event is located at the new boutique at 3490 Peachtree Industrial Blvd, Suite C – Duluth, Georgia 30096About Kami Shade' is a high fashion womenswear designer established back in 2004. The brand has catapulted into a one stop shop eCommerce fashion haven. Fashionable Millionaire is a branch from the Kami Shade' brand which will create the ultimate in person experience for the fashionable consumer.Contacts Kami Shade' & Fashionable Millionaire RSVP: kami@kamishade.com Web: www.kamishade.com Voice: (818) 358-9966 3940 Peachtree Industrial Blvd, Suite C Duluth, Georgia 30096

You can edit or delete your press release Los Angeles Celebrity Designer Kami Shade' Opens An Exclusive New Boutique In One of The Hottest New Atlanta Suburbs! here

07-26-2017 | Fashion, Lifestyle, Trends
ANTORINI
Women's Fashion Accessories | ANTORINI
Luxurious leather gloves The history of ANTORINI gloves dates back to the eighteenth century, when the presence of the Bourbon royal court in Sicily contributed significantly to the development of glove production in Italy. The global centre of glove production is the beautiful city of Naples, which has become a critical location for ANTORINI as well. ANTORINI gloves are currently produced exclusively by hand, and only the best lamb skin is
10-25-2016 | Fashion, Lifestyle, Trends
STUFFORHUMANS
Sustainable Fashion Needs You
Sustainable fashion startup - STUFFORHUMANS - launches their first bag collection on Kickstarter. Handmade in Vietnam, by adults, from artisinal vegetable tanned Italian leather, these stylish retro-modern bags are built to last. Tired of buying poor quality products online and saddened by fast fashion's impact on humans, STUFFORHUMANS set out to create timeless, stylish, quality products for humans without exploiting the humans that make them. The bags are designed in
04-02-2009 | Fashion, Lifestyle, Trends
International Fashion Academy
International Fashion Academy Paris Breeds Fashion Connoisseurs
March 22, 2009 (Shanghai, China) - The International Fashion Academy (IFA Paris) is again bringing its name to the stage of the fashion world with their bachelor’s degree and master’s degree programs. As one of the first foreign fashion schools that opened in China, students are exposed to the classic, yet cutting-edge world of fashion. The Academic Committee is of primary importance to IFA. The fashion design school’s teachers come
12-01-2008 | Business, Economy, Finances, B …
Images Group, Delhi/India
INDIA - ALWAYS IN FASHION
India has always been a tremendously rich sourcing ground for fashion creativity. The world's leading fashion makers have very frequently been inspired by the diversity of India's colors, textiles and garments. In short, the country's relationship with great fashion is nothing new. It has always been there, but now, it is changing, as Indians modernize and globalize. The 9th edition of INDIA FASHION FORUM, to be held on 27/28 January 2009
06-04-2008 | Fashion, Lifestyle, Trends
ICE Istituto nazionale per il Commercio Estero
Apulia and Italian Fashion
The trade mission undertaken by the 12 Apulian businesses that partecipated in the "Contacto" initiative ended last week in Brussels. The initiative "Contacto" - launched by the Italian Institute for Foreign Trade (Ice) and the Apulia Region - started as a well-featured training and "on the job" programme and turned into a B2B meeting session in Brussels. Giulio Patrizi, indoor designer, turned the products manufactured by the
02-21-2008 | Fashion, Lifestyle, Trends
WHF Rock Your Fashion, LLC
Fashion Industry News
The 2008 Rock Your Fashion campaigns continues its theme of music & fashion by signing Men’ supermodel Krishnar for another year as the face of the international ad program. As World Fashion House, Inc, producers of the Rock Your Fashion campaign, get ready for the 8 stage-8 city spring break fashion show they are convinced that the program will again take center stage in pop culture. In 2007,
Comments about openPR
We publish our press releases on openPR.de because we like people who are "open" - just like us.
Frank Obels, CEO, INCONET - Informationssysteme, Communication und Netzwerkberatung GmbH