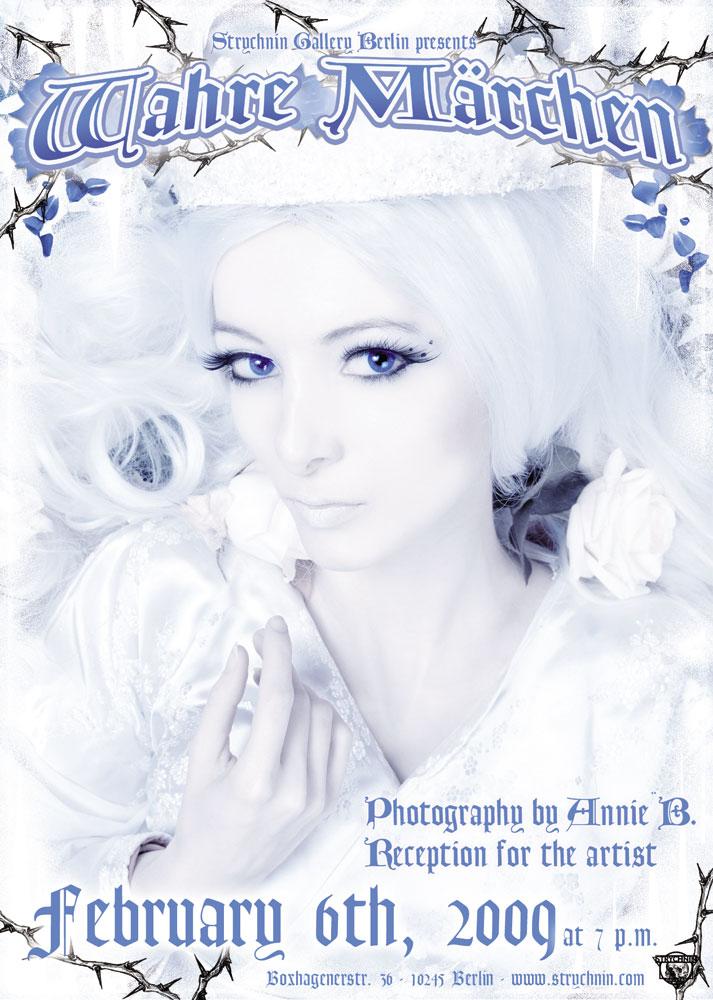 In the last few years, photographer Annie Bertram has made a name for herself with her unique style, and the Gothic art scene can hardly do without her: among others, she did artwork for albums by such popular bands as Blutengel, Scream Silence or Terminal Choice, and her work appears regularly in large magazines as exclusive photo spreads and on covers. Her first photography book titled "Die Farben der Träume" (“The Color of Dreams”) was published very successfully in 2004 and received international recognition. Her second book titled "Wahre Märchen" (“True Fairy Tales”) was published in August 2008 by UBooks, and it is the works from this book that can now be seen at Strychnin Gallery. Opens February 6th at 7 p.m.For Annie Bertram’s current book, musicians such as Chris Pohl and Constance from the band Blutengel modeled for her mystic photographs that were taken in many different settings and locations; some of them were taken in H.R. Giger’s garden in Switzerland. Well-known authors such as Dirk Bernemann, Christian von Aster, Jeaninen Krock or Andreas Kurz were inspired by the resulting images and in turn re-interpreted classic fairy tales by the Brothers Grimm or Hans Christian Andersen in their own special way. Among others, new versions of Snow-White, The Little Mermaid, Snow-White and Rose-Red, Hansel and Gretel now accompany the images in a book that is a work of art – dream-like photography and one-of-a-kind literary interpretation with magical appeal. Annie's photography is an attempt to reveal what most fail to see – thoughts, feelings and destinies. Rather than merely photographing pretty faces, her pictures are an art of profundity and storytelling. Depending on the theme, they're either taken in her studio, in extraordinary, often morbid locations, or – like “Wahre Märchen” – in mystical natural settings. To accompany the opening night, Scream Silence with their front man Hardy Fieting will be playing an acoustic set. Scream Silence have been active in the music scene for over 10 years.Reception for the artist: February 6th, 7 pm. Exhibition runs until March 1st 2009 Opening hours: Thu- Sun from 1 p.m. – 6 p.m., Sat until 7 p.m.With galleries in three bustling hotspots – New York City, Berlin, and London – Strychnin Gallery is a playground for artists from all around the globe. It is a place where collaboration is encouraged, new projects are constantly developed and creativity is the one and only thing that truly counts.Owned by charismatic curator Yasha Young, Strychnin is dedicated to presenting emerging American artists to the European art world and vice versa. It features a variety of artists with particular individual styles rather than artists belonging to a collective “hip” movement. If you insist on putting a label on them, try lowbrow turned highbrow, pop surrealism or fantastic realism among others.Founded in Brooklyn in 1998, the gallery opened a European showroom in Berlin in 2002. The US gallery has since moved to a location in Manhattan’s Chelsea district, opening with a group show featuring over 70 artists in October of 2006. Strychnin Gallery opened a third location in East London’s vibrant art scene right off of Brick Lane in October 2007.The gallery participates in major international art fairs on a regular basis, including Bridge Art Fair, Liste, or Art21 in Cologne, which appointed gallery owner Yasha Young to its selection committee in 2008.Strychnin Gallery Boxhagenerstr. 36 10245 Berlinwww.strychnin.comPR Contact: Iris Bitter production@strychnin.com +49 30 9700 2035

You can edit or delete your press release Strychnin Gallery Berlin presents: "Wahre Märchen" - New Photographs by Annie B. here