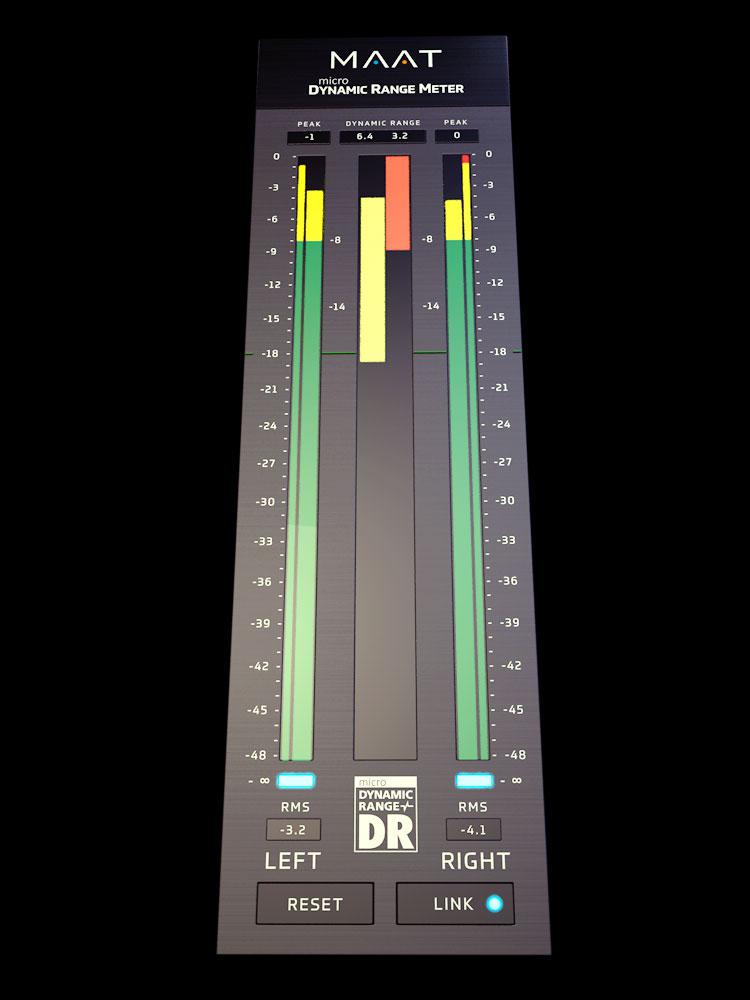 Company announces release of a contemporary recreation of the DR dynamic range metering plug–inMAAT Incorporated, a manufacturer of exceptional performance professional audio solutions, today announced the release of DRMeter version 1.0, a universal metering plug–in for stereo bus masters. DRMeter, a faithful recreation of the legendary TT DR Meter for modern production environments, addresses an unfulfilled need for all engineers concerned with dynamic range issues.Available for all major plug–in formats, including VST2/VST3 and AAX for macOS and Windows plus AU (Audio Units) for macOS, DRMeter offers two essential options for metering plus specialized measurement for DR dynamic range. DR is visually displayed as a real time bar meter plus corresponding numeric fields. Sample Peak Program and RMS amplitude are also shown as nested meters and numeric readouts.DR is a de facto standard created in 2009 to gauge the amount dynamic range compression being applied to popular music. The broad adoption of the DR measurement system paved the way for the movement toward, and eventual adoption of, loudness control standards now in place worldwide. DRMeter's measurement method conforms to the trusted standard first employed by the TT DR Meter. Its display algorithms follow MAAT's guiding philosophy of careful attention to appearance and ballistics, achieving the best match between the aural impression heard by an engineer, and the optical rendering by the meters.When used with the upcoming companion DROffline utility, the DRMeter plug–in acts as a real time gauge of dynamic density, providing preflight checks during mixing and mastering. Offline, a song or entire album can be measured to generate an official DR value.Friedemann Tischmeyer, inventor of the DR measurement system and president of MAAT, declared that the DR measurement system has inspired many thousands of music releases to be more enjoyable and emotional by preserving dynamics. "Back in 2007, we were at the peak of the loudness wars, and I remember that I was annoyed about receiving too many overly compressed and limited mixes. I thought, ‘Why don't we have a simple integer number to describe relevant dynamic range?' After two years and a lot of discussions and experimentation, the DR Meter was born. Creating an impact to inspire musicians, producers, and record companies for more dynamic music releases was a driving force, but I never expected such an overwhelming response and appreciation from the engineering community."One such fan is Grammy Award–nominated engineer Michael Romanowski, proprietor of boutique audio shop, Coast Mastering. Romanowski simply stated, "I love the DRMeter." He appreciates the clean and straightforward layout, allowing him to see Peak, RMS and DR dynamic range all with a quick glance. The ballistics are "…perfect for keeping a close watch on levels and overall dynamics of a mix or final master. It is far too easy, with today's tools, to push the levels of audio past the point of musicality. The DRMeter helps by giving the engineer instant feedback as to their target range for the delivery of their project…This meter should be at the end of every master output for every DAW. Well done MAAT!" DRMeter is affordably priced and available now, exclusively at MAAT's web site. For images, specifications and additional information, visit MAAT dot Digital on the web.©2017 MAAT Incorporated. The MAAT logo, DR dynamic range and DRMeter are trademarks of MAAT Incorporated. All other company and product names are trademarks of their respective owners.MAAT Incorporated, a manufacturer of exceptional fidelity professional audio solutions, is built on the belief that higher accuracy, enhanced workflows and less visual fatigue are hallmarks of better quality. MAAT is derived from "Mastering Academy Audio Tools," reflecting the deep connection and practical wisdom derived from years of practical experience. MAAT's reliance on hard science and in–depth research balanced by extensive listening redefines audio tools for professionals worldwide.Oliver Masciarotte MAAT Inc. 101 Cooper St Santa Cruz CA 95060 +1 (415) 997-8324 marcom@maat.digital