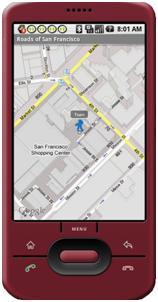 In the Californian metropolis the player get involved in an unexpected chase to test serendipity and investigation abilities. Roads of San Francisco is a new exciting reality mobile game of JOYity, an interactive gaming platform for the use on Android smart phones. Equipped with an Android cell phone the player is set in gaming scenario that involve into bizarre incident immediately. Roads of San Francisco is happening in the same named American city and makes the player perform a detective role, who goes sightseeing the city as tourist. He plans to meet an old friend in San Francisco during his stay and goes to the meeting point when suddenly the apparently harmless situation takes an unexpected turn. Roads of San Francisco is a reality game especially developed for the presentation of JOYity. In an impressive way the multifaceted possibilities of dramatic composition of a game are demonstrated and also the inventive tools serving to construct a varied and exciting game. JOYity is not only a technical platform of large choice of reality mobile games, but is also software permitting self creations of users. Producing new ideas, Android cell phone user can design a game in an easy way. Not least, games are made for the community to use. Finally, the players know the environment next door the best and have a broad knowledge of games.JOYity is available in the Android Market as free download. More information about JOYity and Roads of San Francisco are given at www.joyity.com.About ZelfiThe Zelfi public limited company is a start-up located in Mainz/Germany being actively involved in the fields of Mobile Marketing and Mobile Entertainment by providing software products. The development and the service of a Mobile Marketing platform is our core business. This innovative technology-platform forms a nodal point of mobile phone users, mobile phone software developers and advertisers. The Zelfi newsletter provides current information about new mobile games. Subscribe to Zelfi newsletter at www.zelfi.com/en/newsletter/.Zelfi AG Erthalstrasse 1 55118 Mainz Germany E-mail: info@zelfi.com Phone: +49-6131-9064850 Fax: +49-6131-9064853

You can edit or delete your press release Roads of San Francisco: Mobile Reality Game as Crime Thriller here

01-11-2019 | Politics, Law & Society
Cartwright Law Firm
SAN FRANCISCO CAR ACCIDENT LAWYERS
From simple car accidents to boating accidents and plane crashes, The Cartwright Law Firm provides comprehensive legal services to people injured in all types of Car Accidents. We represent injury victims as well as families who have lost loved ones to wrongful death in an accident. Our firm has a full-time, in-house investigator who can determine who was at fault for your accident. In many cases, he can visit the scene
12-17-2018 | Fashion, Lifestyle, Trends
Society of Single Professionals
Beyond Chemistry Keynotes San Francisco Singles Convention
FOR IMMEDIATE RELEASE Contact: Rich Gosse, 415-507-9962 BEYOND CHEMISTRY: HOW TO CREATE A LASTING RELATIONSHIP KEYNOTES SAN FRANCISCO SINGLES CONVENTION Dr. Ann Schiebert, PsyD, keynotes the annual San Francisco Singles Convention, Saturday, January 19, 2019, 7:30pm, at the Westin St. Francis Hotel on Union Square, California Ballroom 335 Powell Street, San Francisco. Her topic is “Beyond Chemistry: How to Create a Lasting Relationship.”
05-21-2012 | Health & Medicine
Otto Bock HealthCare GmbH
Helping San Myo
A twelve year-old from Myanmar receives a leg prosthesis from Ottobock – Foundation covers costs San Myo from Myanmar is a bright and happy boy. Though the twelve year-old was born without the lower half of his left leg, the handicap doesn't keep him from playing football with friends. In order to help him walk, his father cobbled together a prosthesis using an old drain pipe. At the Ottobock facilities in
01-11-2012 | Politics, Law & Society
San Diego DUI Defense Attorney
San Diego DUI Defense Attorney
January 9, 2012: Mark R. De Yoe, APLC, San Diego DUI defense attorney, has over 25 years of experience as a DUI defense attorney and understands how stressful, scary and confusing being involved with a DUI can be. As Mark's website states, "he's not an experienced DUI attorney, he is and extremely experienced DUI attorney." Mark R. De Yoe has seen it all, as far as DUI cases go: first second,
03-07-2011 | Business, Economy, Finances, B …
W.W. Equipment
San Antonio Truck Company Offers Shuttle Services
San Antonio, TX March 2011. W.W. Equipment offers many work vehicles and accessories, including bucket trucks, digger trucks, reel trailers, pullers and tensioners, and utility poles. They have a unique and thriving inventory, with new options featured regularly. What sets this company apart from its competitors, however, is its dedicated commitment to making their equipment widely available in places like Buffalo and Cincinnati. Not
11-03-2009 | Arts & Culture
The Relevant Stage
Comedy Invades San Pedro
San Pedro BrewHaHa is a new Comedy and Beer Festival produced by Ray Buffer and Mark Tomaino, happening in November from the 6th to the 22nd at Warner Grand Theatre in the historic waterfront and arts district of downtown San Pedro – the Port Town of Los Angeles. San Pedro BrewHaHa is a one-of-a-kind event that brings together great comedic acts, an expanded selection of beers and libations, plus
Comments about openPR
OpenPR is clearly structured and remains true to its principle of confining itself to the essential parts. OpenPR has proven to be a very good and reliable partner to our media agency: Within the shortest time the releases are online and go down well with the media representatives. The success of OpenPR is reflected in the steadily increasing number of press releases. It is good that OpenPR exists!
Ursula Koslik, Director Marketing & PR, F+W Hamburg