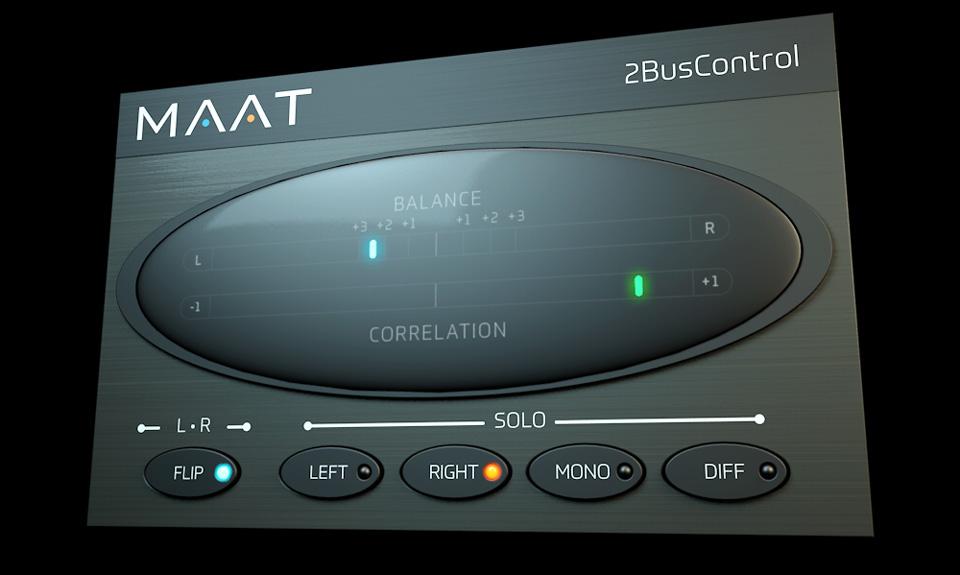 :: Company announces release of new comprehensive stereo master control & metering plug-in ::MAAT Incorporated, a manufacturer of exceptional fidelity professional audio solutions, today announced the release of 2BusControl version 1.0.3, a universal monitor control and metering plug-in for stereo bus masters. 2BusControl is the first product delivered by the new company, and addresses an unfulfilled need in every two channel production workflow.Available for all major plug-in formats, including VST2/VST3 and AAX for MacOS and Windows plus AU (Audio Units) for Mac OS, 2BusControl offers five essential options for specialized monitor modes plus specifically designed metering for left/right balance and correlation. Dual channel mono soloing of each channel is available post-metering with a single click. Traditional left/right soloing can be chosen, or the more esoteric but equally useful M/S or mid/side rendering of the soloed content. In addition, the stereo perspective can be swapped or "flipped," with the left and right signals changing channels. Each solo control is a single button, allowing engineers to check placement and amplitude easily for all aspects of their mix.The metering options are equally practical, with stereo balance and inter-channel correlation occupying the upper half of the user interface. Unlike prior products that provide similar metering functions, the 2BusControl's measurement and display algorithms adhere to MAAT's guiding philosophy of enhancing workflows and improving ergonomics through careful attention to the way actual pros operate. Appearance and ballistics were also meticulously considered to achieve the best match between the aural impression heard by the engineer, and the optical rendering by the meters.All of the 2BusControl's functionality is wrapped in an information-rich yet visually unobtrusive user interface that occupies only a small slice of screen real estate. Likewise, the plug-in is "light weight," demanding a minimum of CPU resources. Friedemann Tischmeyer, president of MAAT, was adamant about creating an opener that not only brings awareness of the new company to the pro audio community, but also addresses a real need in the marketplace. "We want to give engineers a free, introductory plug-in that isn't a one trick pony, as is typically the case." 2BusControl combines "…one stop monitor controls with balance and correlation displays that actually makes sense aurally."2BusControl is available now at no cost, exclusively at MAAT's web site. For images, specifications and additional information, visit MAAT dot Digital on the web.©2017 MAAT Incorporated. The MAAT logo and 2BusControl are trademarks of MAAT Incorporated. All other company and product names are trademarks of their respective owners.MAAT Incorporated, a manufacturer of exceptional fidelity professional audio solutions, is built on the belief that higher accuracy, enhanced workflows and less visual fatigue are hallmarks of better quality. MAAT is derived from "Mastering Academy Audio Tools," reflecting the deep connection and practical wisdom derived from years of mentoring experience. MAAT's reliance on hard science and in-depth research balanced by extensive listening redefines audio tools for professionals worldwide.MAAT Inc. 101 Cooper St Santa Cruz CA 95060 +1 415-997-8324

02-05-2018 | IT, New Media & Software
wolfSSL
wolfSSL 3.13.0 is now available for download!
wolfSSL 3.13.0 includes bug fixes and new features, including support for TLS 1.3 Draft 21, performance and footprint optimizations, build fixes, updated examples and project files, one vulnerability fix. Continue reading below for a summary of the features and fixes included in this release! Protocol Changes: Fixes for TLS 1.3, support for Draft 21 TLS 1.0 disabled by default, addition of "-enable-tls10" configure option Performance and Size Optimizations: New option to reduce SHA-256 code size
12-30-2011 | IT, New Media & Software
Lianshengjie Electronic Technology Co., LTD
Flv Recorder for Stream video Capture & Download
As computer become increasingly popular, people are now accustomed to get information from the video and press online. One desires to download them when he meets some interesting videos in that he might want to share with his friends or save them to their favorite folder. But there isn’t any video download links on the webpage. Then he would run on the download manager to download it, however, the streaming
09-23-2011 | Advertising, Media Consulting, …
Mettler-Toledo International Inc.
Free Download: IR Spectroscopy Defines Catalyzed Reactions
METTLER TOLEDO is pleased to announce publication of a new white paper entitled “Metal Catalyzed Transformations.” As part of METTLER TOLEDO’s Recent Advances in Organic Chemistry series, “Metal Catalyzed Transformations” covers academic examples where in situ spectroscopy supplied critical but hard-to-obtain reaction parameters in a time- and resource-saving way. The paper is available for free download at www.mt.com/webaddress?. [City, State/Country]—Authored by METTLER TOLEDO’s Adrian Burke and Dominique Hebrault, “Metal Catalyzed
04-05-2011 | Leisure, Entertainment, Miscel …
Save Me A Ticket
Download Festival 2011
The UK's largest rock and metal festival heads back to Donington in June. The Festival Arena will be open from June 10th - 12th, with the campsite opening up from Wednesday June 8th. Now heading into its 9th year, the 2011 Download Festival promises to deliver another truly memorable weekend of music and entertainment. The Download Festival; owned by Live Nation, is a three day rock music festival which is held in
02-17-2011 | Arts & Culture
fonts-free.org
Free Fonts download Award
The freshly launched download internet platform fonts-free.org has just launched the live site on February 11th 2011 and calls for free font submissions in all categories to participate in its 2011 free font award. The most downloaded and the best rated fonts in 2011 will be awarded by the website with a couple of rewards: They will be published in the Website's very own "Free-Fonts" Design booklet, which is going
07-01-2010 | IT, New Media & Software
Bredex GmbH
GUIdancer 4.2 available for download
Version 4.2 of GUIdancer, the award-winning automated functional testing tool, is now available for download. Highlights of the new release include support for applications written with Eclipse 3.6 (Helios) as well as various new options to analyse and debug tests. The GUIdancer approach to testing lets testers create flexible and maintainable tests parallel to software development and without any programming effort. Version 4.2 of GUIdancer offers comfortable support for test
Comments about openPR
We publish our press releases on openPR.de because we like people who are "open" - just like us.
Frank Obels, CEO, INCONET - Informationssysteme, Communication und Netzwerkberatung GmbH