New Single of the QUARRYMEN - The band that started the Beatles and U.S.-Tour in October 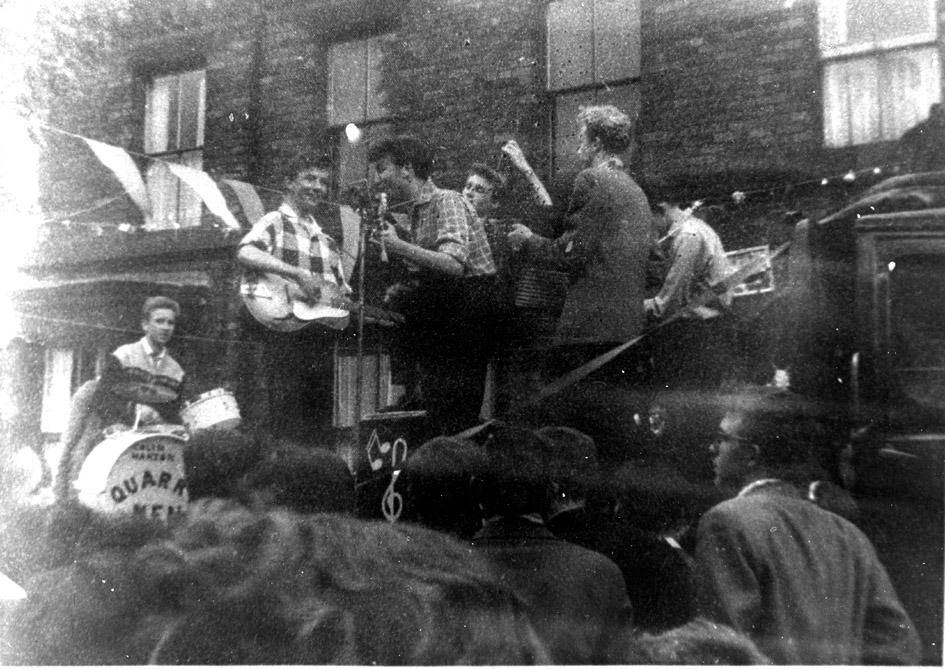 50 years after the first and only single-release of the Quarrymen (feat. aswell John Lennon, George Harrison and Paul McCartney) a new single has been released via internet. The song was recorded in Liverpool and GaryLand in 2008 with a little help of some friends...Reason is the recent Quarrymen U.S.-Tour that have started on the 9th October in New York City). All dates see below!Next year a film will follow that is called "The Quarrymen - The Band that started the Beatles" (filmed in Germany / baltic coast). The song "Never stop Rockin´ Rollin´ " can be donwloaded on www.TheQuarrymen.de (only for the time of the Quarrymen U.S.-Tour in October).John Lennon’s Original Quarrymen - the band who were on stage with John Lennon on Saturday July 6th, 1957 (the day John met Paul McCartney) - got back together in 1997 to celebrate the most momentous meeting in pop music history. They enjoyed themselves so much at that reunion and interest from fans was so great that they decided to re-form the group forty years on!The current Quarrymen lineup includes three of those five original musicians, - Len Garry, former tea-chest bass player, now playing guitar and replacing Lennon as lead singer, - Rod Davis, from Quarry Bank School, at first the banjo player but now on guitar and Colin Hanton on drums, who played with John, Paul, George and John Duff Lowe on the famous Percy Phillips recording session which produced "In Spite of All the Danger" and "That'll Be the Day" which was featured on the Beatles’ "Anthology, Volume 1" CD set. Anyone knowing their Beatles’ history is aware that The Quarrymen eventually evolved into the Beatles. It is precisely their stories of the group’s origins and of course the Skiffle and early Rock music that the Quarrymen perform, that draw to their shows not only Beatles’ fans, but all those who enjoy the history of the music and of the times.The other members of the original group were John's lifelong friend, washboard player Pete Shotton, who retired in Dec 2000 for health reasons, and guitarist Eric Griffiths who sadly died in January 2005, but not before thoroughly enjoying several tours with the newly reborn “Pre-Fab Five” - as the New York Post referred to them in 1998 after their gig at the legendary “Bottom Line” in Greenwich Village.The Quarrymen play the music which influenced the birth of the Beatles, the Skiffle and Rock ‘n’ Roll of the mid fifties – “Rock Island Line”, “Mean Woman Blues”, “Midnight Special”, “Twenty Flight Rock”, “Whole Lotta Shakin’”, “Blue Suede Shoes”, “Lost John”, and many more, played in the style of the many hundreds of similar groups who were laying the foundations of British Rock Music. Of course the difference with the Quarrymen was that it was fronted by one very special man, John Lennon, who gathered together his best mates way back then to embark on the most famous journey in music history.As well as their music, the Quarrymen share their Liverpool sense of humour in the stories and anecdotes with which they pepper their performance, giving Beatles fans a unique insight into the origins of their favourite group and the city in which they grew up. Since 1997 the Quarrymen have played all over Europe, in Canada, Japan, Cuba, and Russia, and have visited the USA several times, performing in New York, Chicago, Boston, Las Vegas and across the country. They have appeared on stage with Pete Seeger, Pete Best and Tony Sheridan and have made countless TV and radio appearances. In July 2007 they were featured on the BBC TV “Newsnight” programme and appeared at the 50th anniversary of the “Day John Met Paul” in Liverpool.The only authorised Beatle biographer, Hunter Davies, also wrote the story of the Quarrymen which was published in 2001.Tour-Dates9th Thur: BB Kings, NYC 10th Fri: The Flickinger Center, Kimball Union Academy, Meriden, NH 12th Sun: The Cavern Club at the Hard Rock Café, Boston 14th Tue: The Arts Center of the Capital Region, Troy, NY 12180 15th Wed: Sellersville Theatre, near Philadelphia – co-bill with Pete Best 17th Fri: Avalon Theatre, Easton, MD 18th Sat: Writers´ Boot Camp Auditorium, Santa Monica, California 19th Sun: SoHo, Santa Barbara, CA 21th Tues: Anthology, San Diego, CAProduction, Management, distribution.GARRELT DANKER MEDIENPRODUKTION Gewerbegebiet Almhöhe Am Kahlberg 1 29614 Soltau Deutschland / Germany Tel. +49(0)5191/14811 Fax +49(0)5191/4000

You can edit or delete your press release New Single of the QUARRYMEN - The band that started the Beatles and U.S.-Tour in October here

08-29-2014 | Arts & Culture
Garrelt Danker Medienproduktion
Star-Club founder Horst Fascher has released his first video-clip
My Baby left me - Horst Fascher & BedT Horst Fascher - the man who brought Rock´n`Roll to Germany - inventor, co-founder and manager of the legendary Hamburg Star-Club, Grosse Freiheit, Germany - one time Lead-Singer of The Beatles - now presents his first music video-clip. Title: My Baby left me. Introducing newcomer BedT as leading actress. available on youtube GARRELT DANKER MEDIENPRODUKTION German production and management company In a business for established stars, new
05-08-2012 | Arts & Culture
Garrelt Danker Medienproduktion
pre-Beatles THE QUARRYMEN released their GREY ALBUM
The Quarrymen, the band from which the Beatles evolved, have released their "Grey Album". It can be purchased (as mp3) from Amazon.com, Amazon.co.uk (England), Amazon.de (Germany), Amazon.jp (Japan) and iTunes. On the Grey Album the original Quarrymen (Len Garry, Rod Davis, Colin Hanton, John Lowe) are playing, singing and talking. As a special addition it includes Beatles-related quests like May Pang ("Lost Weekend"). Pang was, of course, featured on John Lennon´s
11-16-2010 | Arts & Culture
Garrelt Danker Medienproduktion
"The Quarrymen - The Band that started The Beatles" (DVD) now available at amazo …
The authorized music-documentary about The Quarrymen (pre-Beatles) is now available at amazon.com as NTSC-version. It´s the fascinating story of the early days of the most famous music group of all time! Presented by Horst Fascher, founder of the legendary Hamburg "Star-Club" in Germany, where The Beatles became The Beatles. Featured in the film are live footage of a modern-day concert by The Quarrymen - The Band that started The Beatles (recorded
05-18-2010 | Fashion, Lifestyle, Trends
Garrelt Danker Medienproduktion
Pre-Beatles Single now available on iTunes and amazon
The Quarrymen single "Never Stop Rockin Rollin" is now available for download on Amazon.com, Amazon.co.uk and iTunes. The song was featured in the documentary DVD "The Quarrymen - The Band That Started the Beatles". "Never stop Rockin Rollin" was recorded exactly 50 years after the Quarrymen's first single, "That'll Be the Day"/"In Spite of All the Danger," with todays Quarrymen Colin Hanton, John Duff Lowe and future Beatles John Lennon, George