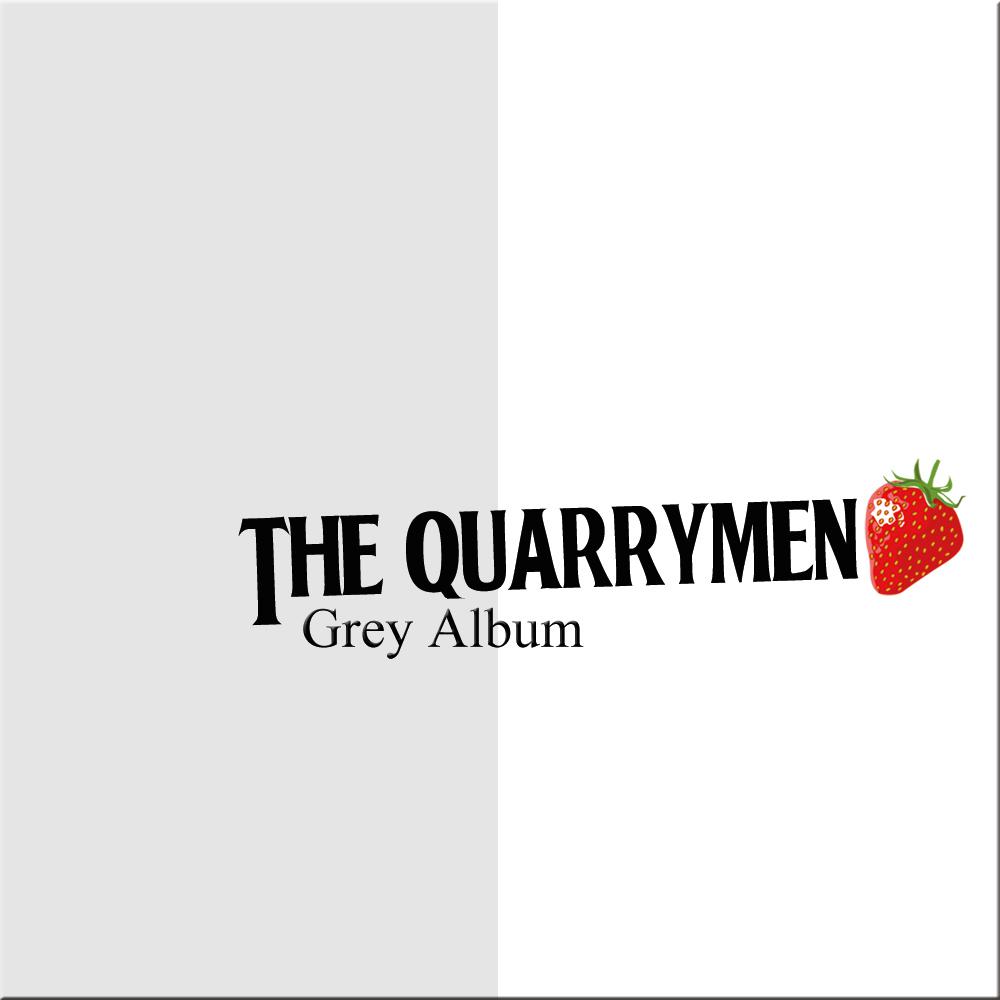 The Quarrymen, the band from which the Beatles evolved, have released their "Grey Album". It can be purchased (as mp3) from Amazon.com, Amazon.co.uk (England), Amazon.de (Germany), Amazon.jp (Japan) and iTunes. On the Grey Album the original Quarrymen (Len Garry, Rod Davis, Colin Hanton, John Lowe) are playing, singing and talking. As a special addition it includes Beatles-related quests like May Pang ("Lost Weekend"). Pang was, of course, featured on John Lennon´s song, "No. 9 Dream." He also wrote "Surprise, Surprise" about her. "Which question should never be answered?" says Rod Davis as the track "No. 6 / Chachi-Chachi") opens. "Number 6," May Pang answers. The song was first played on the air by Chachi Loprete on his "Breakfast With the Beatles" show on WZLX in Boston. Another song of the album is "Bring out the magic", featuring Charles Glenn, bass-guitarist of Little Richard´s band. The Quarrymen, originally a group of British teens who played both skiffle and rock n' roll, had John Lennon, Paul McCartney and George Harrison among its members. The group, with Hanton, Lowe, Lennon, McCartney and Harrison, made its first recording, "That'll Be the Day"/"In Spite of All the Danger," in 1958.The GARRELT DANKER MEDIENPRODUKTION was founded in 1996 from a previous company called Rotraud Danker Schallplattenverlag along with which the record label called Generate Records also belongs to the company (both established in 1987). Garrelt Danker is the owner and managin director. Soltau / Germany is the company base.The Garrelt Danker Medienproduktion do business in music and film production (entertainment and advertising), management, publishing and distribution.Garrelt Danker Managin Director Garrelt Danker Medienproduktion Gewerbegebiet Almhöhe Am Kahlberg 1 29614 Soltau

08-29-2014 | Arts & Culture
Garrelt Danker Medienproduktion
Star-Club founder Horst Fascher has released his first video-clip
My Baby left me - Horst Fascher & BedT Horst Fascher - the man who brought Rock´n`Roll to Germany - inventor, co-founder and manager of the legendary Hamburg Star-Club, Grosse Freiheit, Germany - one time Lead-Singer of The Beatles - now presents his first music video-clip. Title: My Baby left me. Introducing newcomer BedT as leading actress. available on youtube GARRELT DANKER MEDIENPRODUKTION German production and management company In a business for established stars, new
11-16-2010 | Arts & Culture
Garrelt Danker Medienproduktion
"The Quarrymen - The Band that started The Beatles" (DVD) now available at amazo …
The authorized music-documentary about The Quarrymen (pre-Beatles) is now available at amazon.com as NTSC-version. It´s the fascinating story of the early days of the most famous music group of all time! Presented by Horst Fascher, founder of the legendary Hamburg "Star-Club" in Germany, where The Beatles became The Beatles. Featured in the film are live footage of a modern-day concert by The Quarrymen - The Band that started The Beatles (recorded
05-18-2010 | Fashion, Lifestyle, Trends
Garrelt Danker Medienproduktion
Pre-Beatles Single now available on iTunes and amazon
The Quarrymen single "Never Stop Rockin Rollin" is now available for download on Amazon.com, Amazon.co.uk and iTunes. The song was featured in the documentary DVD "The Quarrymen - The Band That Started the Beatles". "Never stop Rockin Rollin" was recorded exactly 50 years after the Quarrymen's first single, "That'll Be the Day"/"In Spite of All the Danger," with todays Quarrymen Colin Hanton, John Duff Lowe and future Beatles John Lennon, George
02-11-2010 | Arts & Culture
Garrelt Danker Medienproduktion
John Lennon´s Quarrymen - Live- and interview film now available as Download
The complete film „The Quarrymen – the Band that started The Beatles“ can now be downloaded to see it on a Computer- or TV-connected Mediaplayer. The film is available either in 4 parts ore complete in one part, in a high resolution MPEG4-format (as a self-extracting zipfile). Approx. size/part 1 GB. Depending on the speed of the individual internet-connection it will take some minutes up to 1 hour to download

07-31-2020 | IT, New Media & Software
Ispirer Systems LLC
MIGRATION TO AMAZON RELATIONAL DATABASE SERVICE (AMAZON RDS)
More and more companies from small business to large corporations are already using cloud services. Businesses which plan to switch their current digital infrastructure to cloud, often focus on Amazon Web Services, one of the biggest cloud platforms. AWS cloud service is more popular than its nearest competitors. Migrate and make gains Notwithstanding the business area, companies of every size have already realized the advantages of cloud data management. Every company has
09-13-2017 | Business, Economy, Finances, B …
Revanthinfotech
Amazon Account Manager
Revanth Infotech is successfully delivery e-commerce solution to many marketplace vendors. They specializes in providing a complete ecosystem for achieving higher sales on Amazon & other E-commerce platforms. It is an one stop solution for setting up, running and growing your business on Amazon & other e-commerce marketplaces without compromising your existing business.By precise strategies, they tailor-out to suit any marketplace business, by analysing competitor data to beat them at
03-18-2016 | IT, New Media & Software
Amazon MWS API
Launches Amazon MWS API for Amazon Sellers
Amazon Marketplace Web Service (MWS) is an incorporated web service API that permits Amazon venders to automatically trade information on orders, requests, pricing, reports, and that's just the beginning. We can provide merchants some assistance with growing their business. By using Amazon MWS API, sellers can expand offering effectiveness and enhance reaction time to buyers. Utilizing MWS, you can make applications that plan and download orders for satisfaction, affirm shipment,
06-08-2011 | Energy & Environment
Global Forestry Investments
Split Opinions Over Amazon Forest
Protecting the Amazon rainforest has never been more important with Brazil’s lower house passing the legislation that loosens restrictions on farmers using their land. The decision has been met with a split in opinions from farmers who welcomed the chance to produce to full capacity, and environmentalists, worried that there will be an increase in deforestation. Greenpeace reported a skyrocketing 570% increase in deforestation; however with the changes in the ‘Forest Code’,
02-18-2011 | Business, Economy, Finances, B …
Panelwarehouse.com
Panelwarehouse.com Joins Amazon Marketplace
Manchester, United Kingdom (11 February, 2011) - Panelwarehouse.com, a leading manufacturer and supplier of display and exhibition stands, join Amazon Marketplace and now feature hundreds of items in the office products section. Panelwarehouse.com has been providing a range of office screens, display stands and desk partitions for over twenty years, and they have been trading online since 2003. They have since established themselves as a company which offers high-quality office products
02-01-2011 | Tourism, Cars, Traffic
Greentracks, Inc.
Amazon Camping Trip with GreenTracks
The GreenTracks Amazon Camping program is a unique opportunity to experience the Amazon rainforest up close and personal. This program starts with 2 days at a rainforest lodge, 4 days camping in the Pacaya Samiria National Reserve of Peru, and 1 final night at the lodge. On the way to the lodge by boat you will stop at a 100-foot tall observation tower to see the confluence of the two
Comments about openPR
We publish our press releases on openPR.de because we like people who are "open" - just like us.
Frank Obels, CEO, INCONET - Informationssysteme, Communication und Netzwerkberatung GmbH