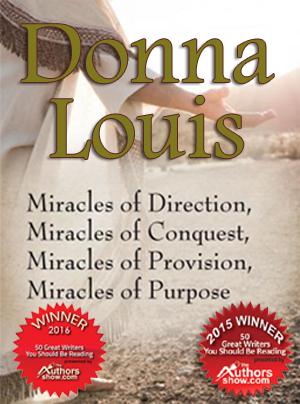 Pope Francis recently canonized two of the children involved in the miracles that occurred in Fatima 100 years ago. At that time, three children experienced visions of the Virgin Mary on six different occasions. The Virgin Mary was said to have given the children three secrets. The visions were declared authentic in 1930. In addition, during that same period of time, tens of thousands of people claimed to have seen the sun spinning and moving in the sky. The canonization of the children adds a tremendous amount of credibility to the claims of modern day miracles. Miracles, both past and modern day, are the subject of award winning author Donna Louis' 'Miracles of Conquest, Miracles of Provision and Miracles of Purpose'.

Donna knows that verifiable miracles occur every day. Her book explores biblical miracles that took place while Jesus was here on earth. She then references with miracles that take place on a daily basis in the modern world. She separates these miracles into four categories and presents insightful example of each type, taken directly from the Bible. She knows that miracles happen every day, even today, and offers readers a message of hope and faith.

Donna was chosen as a winner in the 2015 and the 2016 '50 Great Writers You Should Be Reading' awards contest. 'Miracles' has also received rave reviews from readers. One review called it "amazing, uplifting and inspirational". Another stated, "I was profoundly impressed by the writing."

You can edit or delete your press release Miracles At Fatima Result In Canonizations By Pope Francis - Proof That Modern Day Miracles Exists Says Donna Louis, Award-Winning Author Of 'Miracles Of Direction' here

12-19-2016 | Arts & Culture
Donna Louis
Give The Gift Of Miracles For Christmas - Award Winning Author Donna Louis Explo …
The Christmas story, the Nativity and the stories surrounding the birth of Jesus are most likely the most well known examples of miracles in the world. While nearly everyone in the world is aware of these miracles, they are not the only miracles presented in the Bible. 'Miracles of Direction, Miracles of Conquest, Miracles of Provision, and Miracles of Purpose' by award winning author Donna Louis is a Christian book that
12-14-2016 | Arts & Culture
Donna Louis
Angels And Miracles - Donna Louis, Multi-Award Winning Author, Explores Miracles …
Though we don't often experience miracles or angels directly, the proof is there. In 2006, Bob Van Natta was crushed by a 10,000 lb. truck which fell on him as he was repairing the truck. The axle nearly cut his body in two. During the experience his spirit left his body and he experienced a state of total peace as he looked down on his body from above. On each side
09-27-2016 | Arts & Culture
Donna Louis
Animal Miracles Happen Every Day Too - Donna Louis, Author Of Book About Miracle …
What constitutes a miracle? It depends on who one asks. Nearly everyone will agree that a miracle is an extraordinary event in the physical world that defies a rational explanation. While we might think miracles don't happen today, perhaps they do. A recent story from the town of Galt in Sacramento County entitled 'Freeway Miracle?' is an astounding story of an injured dog that survived 5 weeks with 2 broken bones.
08-03-2016 | Arts & Culture
Donna Louis
Miracles Happen Every Day - Author Donna Louis Gives Readers A New Perspective O …
The dictionary defines a miracle as an extraordinary event in the physical world. While we might think miracles don't happen today, perhaps they do. A recent story on Newshub entitled 'Miracles Happen: Missing Cat Returns After 8 Years' is amazing. While we might say that the return of the cat is a miracle, the truly miraculous part of the story shows us that the cat's owner, a young boy, practically willed
06-21-2016 | Arts & Culture
Donna Louis
Miracles Past And Present - Author Donna Louis Gives Readers A New Perspective O …
A recent story on CBS News told the tale of Stan Larkin, who lived for 555 days without a heart, waiting for a transplant. He was near death when the doctors implanted an artificial device that kept him alive 555 days before he received his transplant. This story captured the hearts and minds of Americans and was detailed not only on CBS News' but also Fox news, Forbes -
08-08-2011 | Arts & Culture
Kunstmuseum Gehrke-Remund, Baden-Baden
Miracles, Martyrs and Mexico
Starting immediately the Kunstmuseum Gehrke-Remund in Baden-Baden, Germany is exhibiting 25 Ex-voto paintings from Mexico in addition to the permanent exhibition of Frida Kahlo “Viva la Vida”. The 25 original Mexican Ex-votos dated from 1918 to 1984 belong to the collection of the Kunstmuseum, and present a kaleidoscope of daily dramas, wishes, dangerous situations where the faith towards a saint or martyr has always helped. "Ex-Votos" are Catholic religious paintings that became
Comments about openPR
We publish our press releases on openPR.de because we like people who are "open" - just like us.
Frank Obels, CEO, INCONET - Informationssysteme, Communication und Netzwerkberatung GmbH