Film Classics Productions Takes Its Latest Films On The Road 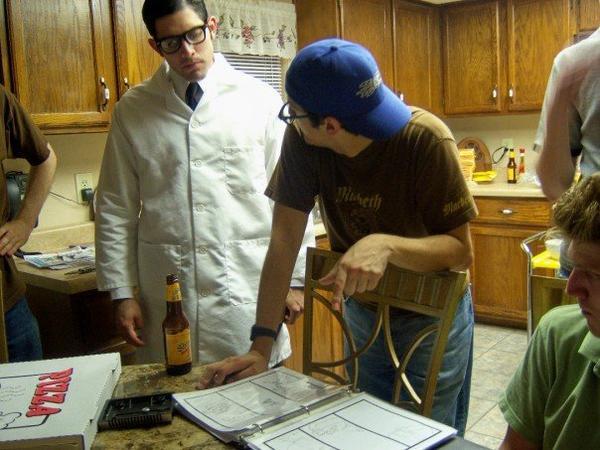 SAN ANTONIO – For the team behind such award-winning short films as "Last Chance" and "Goodbye Digital or The 5 Stages of Grief in Digital Dating", "The End" is only the beginning, as Film Classics Productions celebrates new honors and upcoming screenings for its latest project and a return engagement for its first feature."Four Minutes Till The End", a science-fiction thriller written and directed by Bryan Ortiz and produced by Michael Druck, has been awarded the Jury Prize in the 2008 San Antonio Local (SAL) Film Festival, where it will be screened on Friday, October 10.This latest honor comes after the film won five awards, including Best Film, in the 48 Hour Film Project. The film also won awards for Best Sound Design, Best Directing, and Best Acting, and received the Group B Audience Award as the favorite film of its screening block.During his acceptance speech at the 48 Hour awards ceremony on August 16, Ortiz thanked his cast and crew for helping bring "Four Minutes Till The End" – the story of a young family threatened by a mysterious force – to life. “I’ve been so lucky to work with an amazing group of people,” he said. “Without them, it would just be me standing in front of a camera describing the movie to you, and where’s the fun in that?”In addition to SAL, "Four Minutes Till The End" has been submitted to the Seguin Film & Arts Festival (www.seguinfestival.org) and will be screened at Filmapalooza, the 48 Hour Film Project’s national screening and awards ceremony, to be held in early 2009. As San Antonio’s winning 48 Hour entry, the film is also eligible for the project’s International Grand Prize, which will award $5000 to the entry named “Best 48 Hour Film of 2008.”“Film Classics sets a high standard with its films,” says Dar Miller, Managing Director of the San Antonio Local Film Festival, who screened "Goodbye Digital" and an earlier version of Ortiz’s debut feature, "Doctor 'S': The Movie", to near-sellout audiences at last year’s festival. “People can’t wait to see what Bryan and Michael come up with next. And when I first saw 'Four Minutes Till The End', I knew they had come up with another winner.”The second annual San Antonio Local (SAL) Film Festival will take place on Friday, October 10, at the Charline McCombs Empire Theatre (226 N. St. Mary's St., San Antonio, TX 78205). Doors open at 6:00 PM, and screenings will begin at 7:00 PM. Tickets are only $10 cash at the door.Following SAL, Film Classics will be screening "Four Minutes Till The End" and "Doctor 'S': The Movie" at the Alamo Drafthouse Cinema Westlakes (1255 SW Loop 410, San Antonio, TX 78227) on October 29. The screenings will be part of "Dementia", a double feature also including "Echo", a thriller directed by filmmaker Mark Cantu, who appeared as an actor in Ortiz’s short film "Last Chance".For the cast and crew of both "Four Minutes Till The End and "Doctor 'S': The Movie", the fun of working on a Film Classics project is more than equal to the rigors of shooting it. “One thing I’ve learned from working with Bryan and Michael is to expect a serious workout,” says actor Rick Carrillo, who stars in both films. “I think I did as much running in one day of shooting 'Four Minutes Till The End' as I did on all of 'Doctor "S"'." “Yes, it’s hard work, but when you see all that effort up there on the big screen, it’s all worth it,” says Druck. “And I’m … well, thrilled and thankful that audiences and film festivals have responded so well to our work.”The "Dementia" double feature of "Doctor 'S': The Movie" and "Echo" (which also includes a special screening of "Four Minutes Till The End") will take place on Wednesday, October 29. Doors open at 6:30 PM, and screenings will begin at 7:00 PM. Tickets for the "Dementia" event are only $10 at the door or online at www.alamodrafthouse-westlakes.com.BACKGROUND:• Film Classics Productions was formed in 2006 by writer/director Bryan Ortiz, then a student at the University of the Incarnate Word, and producer Michael Druck, then a talent agent.• In just two years, the company has produced a series of award-winning short films, including "Compose", "Spiral", "Goodbye Digital or The 5 Stages of Grief in Digital Dating" (winner of the NALIP-SA Spring 2007 Film Slam and the Student Film Competition at the 2007 Seguin Film & Arts Festival) and "Last Chance" (winner of two awards, including Best Directing, at the San Antonio 48 Hour Film Project in 2007).• Ortiz was recently spotlighted on KABB’s "Fox News at Nine", and in Conexion magazine, 210SA magazine, and the San Antonio Current; Druck was featured in the San Antonio College campus newspaper, The Ranger.• For more information, please visit www.filmclassicsproductions.com or www.myspace.com/classicfilms.FOR MORE INFORMATION CONTACT: Nikki Young or Lee Hurtado PrimaDonna Productions, Inc. 8603 Crownhill Blvd., Suite 30 San Antonio, TX 78209 210.822.3552 press@primadonnaproductions.com

01-11-2019 | Politics, Law & Society
Cartwright Law Firm
SAN FRANCISCO CAR ACCIDENT LAWYERS
From simple car accidents to boating accidents and plane crashes, The Cartwright Law Firm provides comprehensive legal services to people injured in all types of Car Accidents. We represent injury victims as well as families who have lost loved ones to wrongful death in an accident. Our firm has a full-time, in-house investigator who can determine who was at fault for your accident. In many cases, he can visit the scene
05-21-2012 | Health & Medicine
Otto Bock HealthCare GmbH
Helping San Myo
A twelve year-old from Myanmar receives a leg prosthesis from Ottobock – Foundation covers costs San Myo from Myanmar is a bright and happy boy. Though the twelve year-old was born without the lower half of his left leg, the handicap doesn't keep him from playing football with friends. In order to help him walk, his father cobbled together a prosthesis using an old drain pipe. At the Ottobock facilities in
01-11-2012 | Politics, Law & Society
San Diego DUI Defense Attorney
San Diego DUI Defense Attorney
January 9, 2012: Mark R. De Yoe, APLC, San Diego DUI defense attorney, has over 25 years of experience as a DUI defense attorney and understands how stressful, scary and confusing being involved with a DUI can be. As Mark's website states, "he's not an experienced DUI attorney, he is and extremely experienced DUI attorney." Mark R. De Yoe has seen it all, as far as DUI cases go: first second,
10-11-2011 | Business, Economy, Finances, B …
Hornberger Sheehan Fuller & Beiter, Incorporated
New Website for San Antonio Law Firm
The San Antonio law firm of Hornberger Sheehan Fuller & Beiter, Incorporated unveiled its new website this month. The new site at hsfblaw.com was created to represent the legal services and expertise of the firm. “We felt it was important to give potential clients a fuller description of our capabilities,” said Charles M “Boxy” Hornberger, a firm shareholder. “We’re very proud of our successful history as client advocates.” The new
06-17-2011 | IT, New Media & Software
Cybernetics
Cybernetics Announces Increased SAN Storage Capacity
Cybernetics’ Powerful iSCSI SAN Solutions Now Available With 3TB Disk Drives June 10, 2011, Yorktown, Virginia -- Cybernetics has announced the immediate availability of 3TB disk drives in all SAN Storage disk solutions. Cybernetics miSAN and iSAN SAN storage solutions are now available with 3TB Hard disk drives. The miSAN and iSAN D Series are powerful storage solutions with up to 48TB of raw capacity, per unit,
11-03-2009 | Arts & Culture
The Relevant Stage
Comedy Invades San Pedro
San Pedro BrewHaHa is a new Comedy and Beer Festival produced by Ray Buffer and Mark Tomaino, happening in November from the 6th to the 22nd at Warner Grand Theatre in the historic waterfront and arts district of downtown San Pedro – the Port Town of Los Angeles. San Pedro BrewHaHa is a one-of-a-kind event that brings together great comedic acts, an expanded selection of beers and libations, plus
Comments about openPR
OpenPR is clearly structured and remains true to its principle of confining itself to the essential parts. OpenPR has proven to be a very good and reliable partner to our media agency: Within the shortest time the releases are online and go down well with the media representatives. The success of OpenPR is reflected in the steadily increasing number of press releases. It is good that OpenPR exists!
Ursula Koslik, Director Marketing & PR, F+W Hamburg