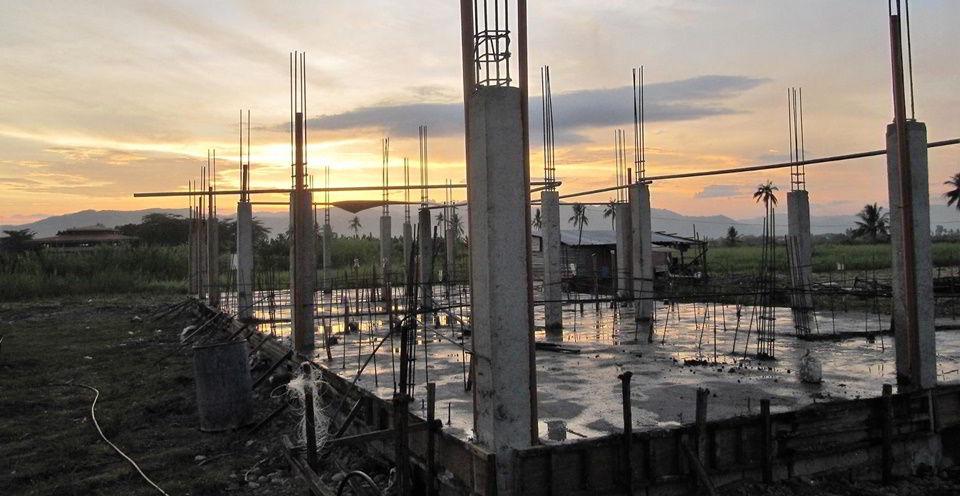 Photo taken at the Casa Esperanza of Angels construction site after the concrete slab was poured.

TANJAY CITY, Philippines - The leadership of the nonprofit charity organization Casa Esperanza of Angels had indicated recently that the planned opening of their orphan care facility might be moved to early next year due to unforeseen delays in the construction of the first children’s house inside the facility. The crew is now building the exterior and interior walls, as well as the bond beam to tie all the walls and columns together. Materials for the fabrication of the roof trusses have been delivered and that work is expected to begin soon.“As of now we are nearing one-third completion,” disclosed Ronald Brown, CEA’s Managing Director. “We continue to make progress on the construction of the first children's home but have not progressed as quickly as hoped.” The area where the facility is located was inundated when the nearby Tanjay River overflowed its banks at the height of tropical storm Sendong (international code name: Washi) in 2011. To protect against the possibility of flooding in the future, the structure’s base is elevated and this feature required depositing and compacting backfill material on the foundation. This work has resulted in a delay of several weeks in the construction schedule. “We will not reach our targeted date for completion of the building. We expect a delay of several weeks past the estimated time of completion,” observed Mr. Brown.The anti-flooding safety feature is not the only cause of delay. Another structure, an electrical and water distribution center that will feed all the planned structures on the property, will also need to be constructed before the building can become fully functional, according to Mr. Brown. The construction crew is also adjusting to a work load that follows more strict standards conforming to international building codes. The CEA management has decided to adopt more rigorous construction standards for the facility out of safety concerns.“Because we are building to specifications more stringent than normal construction for this region, the workers are faced with tasks they have not done before,” explained Mr. Brown. “As a result, we have found the pace of work delayed.”The original plan was to build two structures – the first children’s home and a family cottage that will serve as temporary residence for the Browns and administration center – quickly and have the orphanage facility opened within the year. The management is still keen on accomplishing that although Mr. Brown admits that a postponement of the opening date early next year, might be inevitable. “We are skeptical we can complete all the tasks necessary to become operational within the year,” clarified Mr. Brown, “but we’ll surely try to make that happen.” Mr. Brown remains optimistic about their prospects and sees these delays as a necessary learning curve they can glean lessons from to be applied to subsequent construction projects lined up for the facility.“We believe that with time and training the construction crew will become more proficient in the work which will translate into a faster pace,” affirmed Mr. Brown. “We hope that this "learning curve" will help in construction of other structures later on in the project.”Private individuals and institutional donors from the United States provide the bulk of funding for Casa Esperanza of Angels’ operations and projects in the Philippines. “We are amazed and grateful for the support and generosity of our donors,” concluded Mr. Brown. “Our dream is big and takes considerable time to complete, but with patience and your continued support we will make Casa Esperanza of Angels a reality. We ask for your continued prayers for the project and donations if you are able to give.”Casa Esperanza of Angels Foundation, Inc. is a nonprofit organization founded by Ronald Brown with his wife Georgia Olis Brown to help protect and care for the growing number of orphans, abused or abandoned children, and those in dire circumstances in the province of Negros Oriental, Philippines.Casa Esperanza of Angels Barrio Sta. Ines, Tanjay City Philippines 6204 Contact Person: Ronald Brown, Managing Director Phone: (+63) 905-1850060 ronald@agapeasia.org Website: https://www.casaesperanzaofangels.com/portfolio/first-orphaned-childrens-home-project/