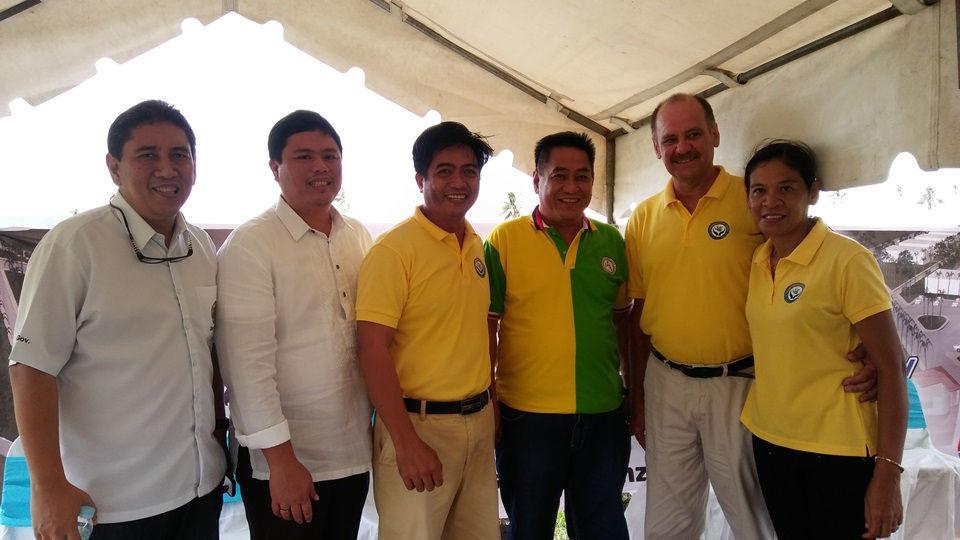 Ron & Gigi Brown with government officials from Tanjay City and the Province of Negros Oriental.

TANJAY CITY, Philippines - Local government officials from the City of Tanjay and the Province of Negros Oriental, Philippines recently pledged support for the Casa Esperanza of Angels Orphanage project in this city.The nonprofit charity organization successfully hosted a groundbreaking ceremony at its orphanage site last Friday attended by local government officials, media personalities, friends, and CEA supporters.“For my part, we will strongly support this institution here,” explained Barangay Captain Rufino Reyes, Jr. “This can really help orphans a lot, children that really need help and relatives who can hardly take care of these children.”Tanjay City officials welcome the creation of the orphanage in the city citing the need for such a facility that can help cater to orphans and abandoned or abused children.“This project should be registered with the local city government of the City of Tanjay for us to legalize help, for us to really be able to help,” suggested Tanjay City Vice-Mayor Dr. Jovencio Bumanglag. “The city government of Tanjay will be helping. This is a good project.”The Negros Oriental provincial government operates on a budget of Php 2 Billion annually and by law, one percent of that needs to be spent through the Local Council for the Protection of Children, the official agency that oversees child welfare projects in the province.“Once Casa Esperanza of Angels will be established, then we are looking forward to partner with Casa Esperanza so that the funds of the province will also be fully utilized,” clarified Atty. Froilan Pinili, the Assistant Provincial Administrator of Negros Oriental Province. “Now, it is not just beneficial to one party but both parties – the province and Casa Esperanza of Angels.”The symbolic groundbreaking activity marks the start of construction on the first of four children’s homes planned inside the orphan care facility.“Our target timeframe is three months,” shared Rainier Garcia, the architect who designed the layout and structures of the proposed orphanage facility. “Hopefully we can get it done within three months.”The milestone was achieved by the orphanage leadership after three years of persistent work. At this pace, the orphanage is set to open its doors by the final quarter of 2017.“We hope to, within six months, be operational,” disclosed Ronald Brown, Casa Esperanza of Angels’ Managing Director. “We’re very thankful for our donors, our very generous donors. Without them, none of these would happen.” Casa Esperanza of Angels Foundation is a nonprofit that relies exclusively on a small network of friends, family, and church-based supporters for its funding. As such, there’s a constant need to raise funds for the next structures planned inside the facility.“Of course, we continue to need more funding,” observed Mr. Brown. “We may have enough funds for the first home but after that, we will need continued funding to keep the construction going at this pace.”About Casa Esperanza of Angels Foundation: Casa Esperanza of Angels Foundation, Inc. is a nonprofit organization founded by Ronald Brown with his wife Georgia Olis-Brown to help protect and care for the growing number of orphans, abused or abandoned children, and those in dire circumstances in the province of Negros Oriental, Philippines.Ronald Brown Managing Director Casa Esperanza of Angels Foundation, Inc. Barrio Sta. Ines, Tanjay City Negros Oriental, Philippines 6204 Phone: (+63) 905-1850060 Email: ronald@agapeasia.org Website: https://www.casaesperanzaofangels.com/groundbreaking