BitConnect Price Increased by 18x Within 6 Months Since ICO 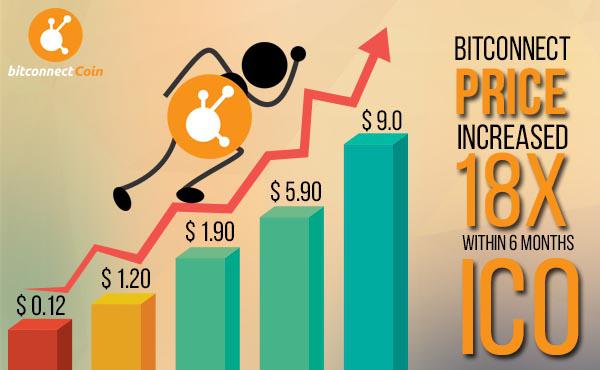 The price of BitConnect, better known to traders as BCC, has surged from around $0.5 to $9 within six months since its initial coin offering (ICO) in November of 2016. Following the momentum of bitcoin, BCC has maintained its upward trend and is projected to continue its growth trend throughout 2017.Similar to bitcoin and other leading cryptocurrencies such as Ethereum Classic, BCC has a fixed monetary supply of 28 million. Theoretically, BCC is a deflationary currency and because of the limited supply, the price of BCC is expected to rise as long as the demand is met and sustained. Since the supply of BCC remains fixed but the demand is increasing on regular basis, the price of BCC is expected to increase drastically in the long run.Currently, around 6 million Bitconnect Coins are in existence and investors include avid cryptocurrency investors in Asian countries. According to the Bitconnect team, the Bitconnect community is spreading rapidly throughout various Asian countries and in the long-term, the Bitconnect team hopes to introduce BCC worldwide.With a market cap of $49.7 million, BCC is one of the leading cryptocurrencies competing with other innovative altcoins such as Lisk, Ardor and Iconomi. In fact, the current market cap of BCC is larger than that of Economy, which very recently raised over $10.5 million in its first ICO.BCC’s consistency and rapid increase in price has triggered the interests of many investors in the cryptocurrency community over the past few months. Thus, the majority of traders and investors have begun to ask when the optimal period is to invest into Bitconnect Coin.Based on BCC’s six-month trend, it seems as if May and June would be the best time possible to invest in bitcoin for two important reasons : explosive growth of the cryptocurrency market and the short-term downward trend in BCC.Although BCC has enjoyed a massive half-year growth since January, the price of BCC fell from April 1 to early May. However, the price of BCC already began to bounce back and it is in progress of rebounding to its previous all-time high of $15.BitConnect is an open source all in one bitcoin and crypto community platform designed to provide multiple investment opportunities with cryptocurrency education where it is entirely possible to find the independence we all desire, in a community of like-minded, freedom loving individuals who, like you, are seeking the possibility of income stability in a very unstable world.THE PANORAMA PARK STREET ASHFORD ENGLAND TN24 8EZ.Company Number :10278342.