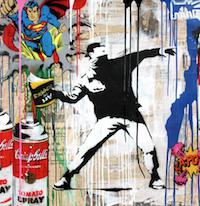 GALERIE FLUEGEL-RONCAK, with a strong focus on Contemporary Art and Pop Art will show new artwork of Street Art Star Mr. Brainwash for the very first time in Germany. The opening of the exhibition will be on Friday, June 23rd 2017, 7pm – 9pm, in Nuremberg, Germany. The exhibition runs through September 30th 2017. On view will be about twenty unique Mixed Media prints. The show will also include a portrait of famous supermodel Kate Moss and the well-known "Follow Your Dreams" chimps.Galerie Fluegel-Roncak ist the official and exclusive cooperation partner of Mr. Brainwash in Germany.The two exhibitions in London and New York attracted a large attendance and were sold out within days. Last year Brainwash had his first solo show in Seoul/Korea. Many celebrities are among the collectors of Mr. Brainwash’s artworks like Rihanna and Madonna.The artist formally known as Mr. Brainwash is also popular as „MBW“. In real life he is called Thierry Guetta. He was born 1966 in France but moved to Los Angeles with his family at the age of 15. His interest in street art was spurred by a visit to France in 1999, where he learned that his cousin was the infamous sprayer Space Invader. Today Guetta lives and works in Los Angeles. He became famous with the Oscar-nominated documentary „Exit through the gift shop“. In this movie he accompanied his big idol, street artist „Banksy“ for several days.The movement of Street or Urban Art was created in the suburbs of London with graffiti art in public places. At first it has been famous just in insider circles, then it became highly coveted as collector’s item for musicians and other celebrities. The „Wall Street Journal“ reported in detail about it in November 2013. Today some oft he Urban Art pieces make millions at auctions. Urban Art can be seen as a continuation of the Pop Art Movement. Pop Art is one of the most successful art movements in the last decades. Many of our artists are on view in well-known museum collections around the globe.Galerie Fluegel-Roncak is focused on POP ART, Contemporary Art and Photography. Changing solo shows with works by Andy Warhol, Keith Haring, Roy Lichtenstein, Julian Opie, James Rosenquist, Alex Katz or Mel Ramos on three floors at the gallery space in the heart of Nuremberg expose different positions of our gallery program. We also have pieces by Pablo Picasso, Marc Chagall, Gerhard Richter or Basquiat on request.GALERIE FLUEGEL-RONCAK Obere Woerthstrasse 12 90403 Nuremberg GERMANYinfo (at) fluegel-roncak.com http://www.fluegel-roncak.comTue – Fr 11am - 6pm Sat 11am - 2pm and by appointment

You can edit or delete your press release Opening of the new show „Mr. Brainwash – Germany is beautiful“ June 23rd 2017 here