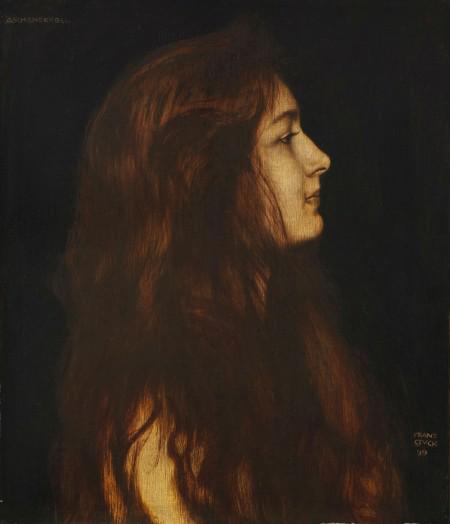 Munich, 26 April 2017, (kk) – The collection of a Southern German art lover that is going for sale in the auction of 19th Century Art at Ketterer Kunst in Munich on 24 May is a true gem. Works by renowned artists from the Munich School, as well as by illustrious representatives of Austrian art are among the highlights of the 35 lots.

The high-class range of offerings is led by Ferdinand Georg Wald-müller's oil painting “Ein alter Invalide mit Kindern“ from 1827, which carries an estimate of EUR 100,000-150,000. The acclaimed Viennese artist possesses great mastery in capturing the observer by carefully rendering his protagonists' emotional ties. This closeness emanates a touching truthfulness. His landscape paintings, however, are likewise captivating. An impressive example thereof is the work “Altes Bauerngehöft im südlichen Wienerwald“ from around 1850, which will enter the race with an estimate of EUR 40,000-60,000.

Other highlights are two works by Franz von Stuck. The painting “Aschenbrödel“ from 1899 introduced a very successful motif series in his œuvre. Owed to the young girl's innocent erotic aura, the portrait, strictly kept in side-face perspective and executed in Italian Quattrocento manner, is a sensual and gracious depiction that expresses vulnerability and strength in equal measure. It has been estimated at EUR 80,000-120,000 and is on a par with another work by the artist: Made around 1913, “Susanna im Bade“ is a popular theme from Christian tradition that Stuck rendered time and again. However, in doing so he abandoned their traditional meaning in favor of a more archetypal human interpretation.

Half a dozen works by Franz von Defregger are guaranteed to provide excitement in the saleroom as well. The group is led by the oil painting “Die Zitherspielerin“ from 1909. Even though the Tyrolean artist made several variations of the popular motif, the portrait master put particular emphasis on the people's faces in this work. An effect that is even increased by the plain background. The estimate is at EUR 20,000-30,000.

Apart from the special auction, the array in the department of 19th Century Art is enriched by more than 170 other works, with, among others, a portrait of “Princess Theresa of Bavaria“ (estimate: EUR 25,000-35,000) from the widely traveled court painter Karl Stieler. Other artists represented with several works are Friedrich Kallmorgen (e.g.: “Der Taufgang“, estimate: EUR 15,000-20,000), Hans Thoma (with estimates of up to EUR 15,000), Edward Theodore Compton (among others with a “View of the Marmolada“ and a “View of the North Slope of Grossglockner“, estimates: EUR 12,000-15,000 each) as well as Joseph Wopfner and his monumental “Fischerzug am Chiemsee“ (estimate: EUR 15,000-20,000). Other big names in the section are Paul Baum, Jan Chelminski, Johann Georg von Dillis, Jakob Wilhelm Grünenwald, Karl Hagemeister, Erich Kips, Alexander Koester, Franz von Lenbach, Carl von Marr, Friedrich Voltz and Heinrich von Zügel.