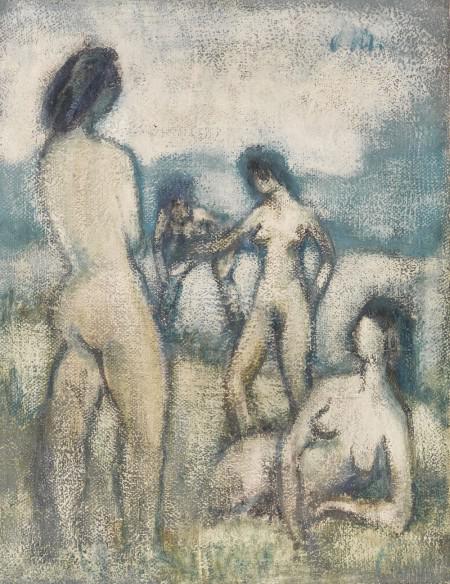 Munich, 29 March 2017 (kk) – Naturally good is not only true for the nature motifs sold at the Ketterer Kunst auction in Munich from 8 – 10 June. Next to rural scenes from Otto Mueller and Gabriele Münter, as well as from Emil Nolde and Georg Baselitz, highest quality by internationally acclaimed masters of abstraction is also on offer.

on 1) Modern Art
The number one spot in the department is currently held by Otto Mueller's work “Vier Badende“ that has been estimated at EUR 300,000-400,000. This work, presumably made as early as in 1910, is one of the multi-figure nude scenes by the artist that are highly sought-after on the global auction market. Otto Mueller reduced these composition to a natural simplicity. His figures freely move about a meadow, fully aware of their physicality and entirely untinged by any doubt in their existence. The aspect of the seemingly unreachable unconstrained idyl amidst the bustle of an ever new and progressive urban setting makes this work more topical than ever.

The outdoors where also a place where Gabriele Münter felt at home. She is represented with several works in this auction, the array is, of course, led by two motifs of nature. While the “Berglandschaft mit Haus“ from 1910 has been estimated at EUR 240,000-280,000, the price for the work “Landschaft mit gelbem Haus“ is at EUR 180,000-240,000.

A bit more, EUR 200,000-300,000 to be exact, has been tagged to Hermann Max Pechstein's oil painting “Ronmay“ from 1917. It shows the daughter of the chief of Palau, who impressed the artist just as much as the beautiful landscape of the South Sea islands did. The portrayed lady's exotic appeal, the lucent colors and the expressive stroke of the brush must have been reason enough for the US director Josef von Sternberg to buy the work while he was on location in Berlin to make the movie “The Blue Angel“ with Marlene Dietrich. Until 1949 the work was part of his acclaimed collection and was presented to the public in several exhibitions.

While Heinrich Maria Davringhausen's painting “Krieg“ (estimate: EUR 100,000-150,000) from 1914 illustrates the destructive forces of war, Emil Nolde's Northern German landscapes emanate peace and energy at the same time. Next to his “Marschlandschaft mit Bauernhof“ (estimate: EUR 80,000-100,000) and the watercolor “Nordfriesische Landschaft mit Bauernhof“ (EUR 140.000-180.000), around a dozen more works by the remarkable artist will be called up.

With an estimate of EUR 500,000-600,000 the work “Zwei halbe Kühe“, painted by Georg Baselitz in 1986, is among the leading works in this department. The artist reduced the familiar animal motif to an essential basic structure, in order to attain maximum artistic freedom. The familiar provides a safe basis from which the artist dared to make an epoch-making step. Accordingly, this work counts among the so-called 'Fracture Pictures' which in a way marked the transition to the up-side down paintings that would earn Georg Baselitz global recognition.

1968 is also the year of origin of Gerhard Richter's “Stadtbild“, quasi the same time his famous work of the Milan Cathedral Square was made. Sold at a price of 29 million it was long considered the artist's most expensive painting. The “Stadtbild“ is part of the artist's early black and white period of creation in the 1960s, which, next to the work phase of the “Abstract Pictures“ as of 1976, fundamentally shaped today's perception of Gerhard Richter's artistic creation. Works from this period count among his most sought-after works on the global art market. The estimate is at EUR 300,000-400,000.

Alongside Serge Poliakoff's oil painting “Composition abstraite“ from 1958, which has been estimated at EUR 250,000-300,000, Willi Baumeister contributes a fascinating work from his significant Montaru-Series that is estimated at EUR 150,000-200,000. That same price is also tagged to “Squares: Blue and Cobalt Green in Cadmium Green“ by Josef Albers.

You can edit or delete your press release June-Auctions: From Modern Classics to Contemporary – Pure Nature – Naturally Good here

02-05-2019 | IT, New Media & Software
Archiware GmbH
Archiware delivers professional Archive and Backup for 1,000 EUR
Archiware GmbH, manufacturer of the media-focussed data management software suite Archiware P5, now offers the new, affordable P5 Desktop Edition. The new license bundle caters to small teams and single users willing to professionally archive their media. Director and DOP Anton Nelson showcases what the P5 Desktop Edition can do in a beautiful testimonial. Munich, February 4th, 2019 - Keeping media safe is crucial in media production – be it raw
10-30-2013 | IT, New Media & Software
Onlineprinters GmbH
onlineprinters.com invests more than EUR three million in production
New 8-colour offset printing press expands online print shop's capacity Neustadt an der Aisch, Germany – By investing more than EUR three million, Onlineprinters, the internationally operating online print shop, has expanded the production facilities at its German site. Extra offset printing capacity was added in September with the purchase of a new state-of-the-art 8-colour printing press, the Heidelberger Speedmaster XL 106-8P, including a new CTP system for digital printing plate
07-17-2012 | Health & Medicine
Otto Bock HealthCare GmbH
EUR 155,000 for Safe Zones Project
Eichsfeld Festival Attracts 25,000 Music Fans to Downtown Duderstadt "Tonight is going to rock!" It was with these words that initiators Professor Hans Georg Näder and Peter Maffay opened the 2012 Eichsfeld Festival this past Saturday. Around 25,000 music fans followed the invitation to experience top-class live performances in the Marktstraße of Duderstadt that day. Peter Maffay, Ich + Ich and four regional special guests did more than just wow the
01-18-2012 | Business, Economy, Finances, B …
Clariant International Ltd
Clariant successfully issues EUR 500 million Eurobond
Muttenz, January 17, 2012 – Today, Clariant successfully priced an Eurobond transaction of EUR 500 million with a tenor of 5 years, issued by Clariant Finance (Luxembourg) S.A. and guaranteed by Clariant Ltd. The fixed rate notes with a minimum denomination of EUR 100,000 and a final coupon of 5 ⅝ % p.a. are maturing on January 24, 2017. The orderbook was significantly oversubscribed on the back of strong investor demand.
12-10-2011 | IT, New Media & Software
VSHosting
VSCloud – cloud services from 0.78 EUR per day
On 15th of August, at a press conference, the unique cloud project named VSCloud was presented which provides cloud services of IaaS (Infrastructure as a Service) type. After three months, VSCloud can boast with hundreds of active users mainly from the Czech Republic and Slovakia. The leadership of VSCloud foresees that the number of first thousand active users will be surpassed by the end of this year. What are the advantages
02-08-2008 | Energy & Environment
Continuing Education Center der TU Wien
“Die Presse” Scholarship in the amount of EUR 15000
MSc Program Environmental Technology and International Affairs The shortage of environmental resources and the dealing with pollution are challenges which the international society of the 21st century has to face. Climate change, water shortage and air pollution are only some of the problems which have to be solved. The purpose of a sustainable development can be reached only if decision makers dispose of a comprehensive education. The cooperation between the Vienna University
Comments about openPR
Your portal is fast, simple, and easy to use. Others may have more functions but they also demand more editing time, you have to preformat the text in order to achieve a good result etc. I think openPR is really fantastic!
Andreas Knepper, wallmedien AG