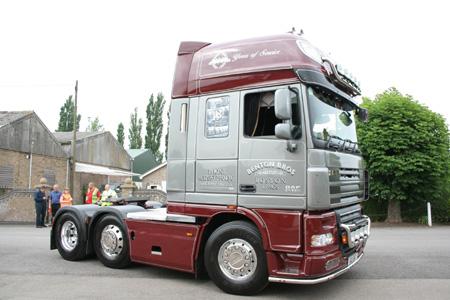 Brigade Electronics blind spot camera and monitor system was supplied by C.F Parkinson’s of Boston, the largest independent motor factor in Eastern England. The BE-300 series cameras were fitted to Benton’s new XF105 DAF truck for the benefits of safety. Placed neatly in the wind deflector on both the left and right hand side of the cab, the cameras provide a wider angle of view than existing blind spot mirrors. The VBV-750A, five inch colour monitor is integral to the dash and provides a clear picture. Benton Brothers Driver, Gary Butler, said: “When sat in traffic or on a slip road, you can see cars on the monitor before you can see them in the mirrors. It gives a wider view than the curb mirrors and is useful on roundabouts or tight corners. I do use the monitor regularly and with the mirrors as well you have the best of both worlds and that extra peace of mind.” bentons cab The celebration truck pays tribute to John William Benton, the founder of Benton’s in 1908. Benton’s was incorporated in 1954 by his three sons Bill, Ted and George. One hundred years later grandson and Chairman, Martin Benton, oversees operations at the original site in Sibsey, near Boston in Lincolnshire and now also Immingham. With a fleet of 150 vehicles all capable of carrying freight carriage at 44 tonnes and average annual mileage of 86000 miles, Benton Brothers Transport makes health and safety legislation first priority. Already fitting the latest mobile technology, satellite tracking, replacing vehicles every five years and employing highly efficient trained drivers, the new camera – monitor system will further increase safety. Brigade’s system increases the driver’s field of vision in areas that were previously a blind spot, providing other road users with improved safety. Brigade Electronics Plc Brigade House The Mills Station Road South Darenth Kent DA4 9BD www.brigade-electronics.com neil.vinall@brigade-electronics.com emily.randall@brigade-electronics.com Brigade Electronics plc was established in 1976 and is market leader in reversing safety systems. It is the only company in the world to provide a complete range of reversing safety systems and with its new product introductions extend safety to all-round visibility, security and communication. The company’s reputation is built upon the quality and reliability of both its products and its service and support.

02-19-2009 | Tourism, Cars, Traffic
Brigade Electronics PLC
With the Deadline Looming for the Mirror retrofit, Dobli is the Solution
The Dobli mirror is an EU approved, low cost solution, for vehicles where it is not possible to replace mirror glass. Dobli is compatible with most major truck makes and easily mounted to provide complete visibility of the blind spot to the nearside. Brigade’s marketing manager, Chris Baker said: “The response from our stockists and customers suggests that there are lots of fleets that have yet to be brought up to
12-10-2008 | Logistics & Transport
Brigade Electronics PLC
Brigade has launched a unique new range of cameras
Small and compact, the BE-500C range can be fitted discreetly to the vehicle for a reversing view or to the front to meet the class six requirements of the EU directive (2003/97/EC for front mounted cameras or mirrors).They are the ideal solution for truck drivers who experience problems with front mirrors being knocked or broken in the truck wash. The four models in the range provide both mirror image to
08-27-2008 | Tourism, Cars, Traffic
Brigade Electronics PLC
Brigade Returns to Automechanika with an Impressive Range of Vehicle Safety Devi …
Brigade has been a pioneer in vehicle safety for over thirty years and will be demonstrating the MDR-304 digital recorder in hall 3.1, stand E44. Designed to protect driver and passenger safety, whilst combating false collision damage insurance claims in an increasingly litigious society, the MDR-304 captures events in ‘real time’ with 25 frames per second. Footage can be used as irrefutable evidence, often leading to claims being settled out
07-04-2008 | Logistics & Transport
Brigade Electronics PLC
Brigade Electronics Introduces Highly Resilient Waterproof CCTV camera systems
The VBV790C and BE890C cameras have a supreme IP rating of 69K are dust tight and extremely waterproof. The cameras can be immersed in water for long periods of time, are resilient to high pressure from steam and jet cleaners: making vehicles more hygienic and therefore safer. The VBV790C and the BE890C are the ideal solution for industries that require their vehicles to be pressure washed such as; food processing, the