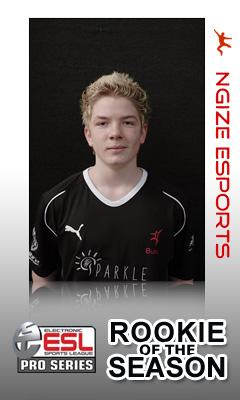 Herne, Germany June 9, 2008 - European top gaming clan nGize eSports, today proudly announces that the young FIFA player Soeren 'BuBu' Soetebeer was awarded with the "Rookie of the Season" title. This means that he performed best of all newcomers of the past ESL Pro Series season. After already being medalled with the award “Rookie of the Season” previous season by the player Thomas 'Vander' Vander, these results confirm the concept of the Team to give young players a chance and good support by main sponsor SPARKLE to foster their career. Together with our partner nGize we are looking forward to continuing this concept to qualify for the ESL Pro Series finals next season, which means top 4."We are very proud that we have played such a good season, even though we just missed the finals", told Christian Funk, CEO of nGize eSports. Further he said: "At the beginning of this season we knew that we recruited a strong talent with Soeren. This prediction was now confirmed by the award of the "Rookie of the Season" where I would like to say thanks to him and to all partners, especially SPARKLE Computer and PUMA allesraubkatze for making this achievement possible."Soeren 'BuBu' Soetebeer himself told: "I am very happy about this great season with nGize an SPARKLE. At the finals in Cologne I received the Pro Series award as "Rookie of the Season" which makes me very proud to get this acceptance. Unfortunately I wasn’t able to be present at the event to pick up the award by myself, since I took part at an important soccer match. I want to stress that this is the second season in a row where a player of nGize got this award. Next to Vander I am the second one and I hope that my mate Benedikt 'SaLz0r' Saltzercould will make the triple complete next season."With this award nGize eSports and its sponsors experience great successes of their teamwork.Further reference: http://www.ngize.de/index.php?news-1671 http://www.esl.eu/de/news/58194/nGize eSports is proudly sponsored by:Main Sponsor SPARKLE Computer www.sparkle.com.tw Officeal wear by PUMA allesraubkatze www.allesraubkatze.de Traning Location by ATOMIK Bootcamp www.atomik.infonGize FIFA wird unterstützt von: SPARKLE Computer PUMA allesraubkatze.de Kontakt Alexander Leonard Ronge nGize – PR Department Gysenbergstr. 77b 44627 Herne email: a.ronge@ngize.de tel: 01 76 – 20 11 36 95Founder Christian Funk is a former professional FIFA player who has played for famous German teams like Team64 AMD, DkH, and eSports-United. After his career as a professional player, he wanted to create something new. The idea of the new gaming clan – nGize was born. nGize should be a unique eSports clan, with the focus on eSports and lifestyle with a positive and dynamic presentation. The name nGize is formed from the verb “to energize” and the noun “energy“ – in addition to this, the logo underlines the idea of the clan and transports the unique image of the clan. The nGize character underlines the creativity, fun, and sports of our players and members. Since the founding on 01. February 2006 nGize has established itself as one of the fastest growing eSports label. During this short period of time we qualified for Europe’s most important online league, the ESL Pro Series with three teams (Counter Strike:Source, Counter-Strike 1.6 Switzerland and FIFA). Our passion is professional gaming at the highest level, as our slogan “eSport aus Leidenschaft!” (engl.:“eSports with passion!”) underlines perfectly. However, we as a company also want to reach our full potential through positive partnerships for the players and companies we represent. A lasting relationship for both parties is of immense importance.

05-19-2009 | Sports
nGize eSports
First Place at eSports World Cup Masters Cheonan 2009
The European top eSports clan nGize eSports proudly announces having finished first place at the eSports World Cup (ESWC) Asia Masters 2009 of Cheonan (Korea RP). The young Spanish Warcraft III talent Pedro Moreno 'Lucifron' Duran (17) won one of the major tournaments in the eSports world, along with a prize money of $10.000. ‘Lucifron’ managed to beat the Korean player June 'Lyn' Park in the grand finale with a score
04-20-2009 | Leisure, Entertainment, Miscel …
nGize eSports
nGize eSports is leading the Germanys professional FIFA 2009 league
nGize eSports qualified in the last season of Germany´s highest eSports league – the Electronic Sport League (ESL) - on forth place. This was a tremendous achievement after pursuing a hybrid strategy, consisting of established Pro-Gamers and having young talents in the team’s line-up. In the current season nGize eSports is following its tradition by searching for new talents in the FIFA scene and hiring top players. After the sixth game
09-12-2008 | Sports
nGize eSports
SPARKLE Computer prolongs sponsorship
nGize.FSP is delighted to announce that Mainsponsor SPARKLE Computer has prolonged the sponsorship for another year. Furthermore, the company will intensify the cooperation with the international successful eSports club. "I am very delighted to announce that Sparkle and nGize.FSP will work together for another whole year,” said Christian Funk, Chief Executive Officer of nGize.FSP. “The past six months have been very exciting for both of us, giving SPARKLE Computer and nGize.FSP
07-02-2008 | Sports
nGize eSports
nGize.FSP – FSP Group new name sponsor of nGize
FSP Group, worldwide power supply leader, is the new name sponsor of the international eSport-Clan nGize. The club, recently being very successful in promoting eSports with its campaign "playing alone sucks", will now be called nGize.FSP. "We are very delighted to cooperate with the successful enterprise FSP Group. FSP Group as the new name sponsor, SPARKLE Computer being main sponsor and outfitter PUMA allesraubkatze.de will help to increase our strength and

05-28-2021 | Sports
CCGrass
FIFA Quality Field for the Frajanas Municipal Stadium in Spain
CCGrass(CCGrass.com), the world’s largest synthetic turf manufacturer, and FIFA Preferred Producer, has recently completed a FIFA Quality pitch for the Frajanas Municipal Stadium (ESTADIO MUNICIPAL FRAJANAS) in Spain. The installation of a new artificial grass in the Frajanas sports complex is a work of improvement action with the fundamental objective of responding to a manifest need for the various sports groups and users. It is about readapting the football field with the
09-21-2018 | Leisure, Entertainment, Miscel …
PlayerAuctions™, LLC
FIFA 19 Release is Official!
Sports fans rejoice, as FIFA 19's release date is now official. On September 28, you can play your favorite soccer game on Switch, PS4, PC, and Xbox One. It's still the soccer video game that you know and love, with new and improved features. Here are a few of them. New Features First, the Active Touch system provides stability and fluidity of movement. It gives better overall control of passing and shooting
09-05-2018 | Business, Economy, Finances, B …
Spire Research and Consulting
FIFA World Cup 2018 holds lessons for successful team building
The FIFA World Cup 2018 is widely seen as one of the best World Cups in recent memory, with many surprises and goals aplenty. One talking point was the role of teamwork as opposed to just superstar talent. What lessons can businesses learn from the beautiful game? Leon Perera, CEO of Spire Research and Consulting, shared his thoughts in The Business Times – Views from the Top section on 23
06-07-2016 | Sports
CCGrass
Aging Phnom Penh Stadium Gets FIFA 2 Star Treatment
Dating back to 1963, the iconic National Olympic Stadium of Phnom Penh, Cambodia, has been given a facelift in the form of a brand new pitch, utilising artificial grass for the first time in the stadium’s chequered half century of history. Installed by CCGrass, the new pitch has been certified as a FIFA 2 star field, one of the last such classifications since FIFA’s decision last year to replace the 1
07-07-2014 | IT, New Media & Software
Cayin Technology Co., Ltd.
Celebrate the 2014 FIFA World Cup with Digital Signage
To give fans an excellent view of the month-long football festival, the host country of the 2014 FIFA World Cup, Brazil, is making untiring efforts and arrangements by launching large-scale digital technology in the Arena Pantanal Stadium in Cuiabá. As part of the installation, CAYIN supplied a complete digital signage solution, including 122 digital signage players and 2 content management servers. Connecting more than 200 LED and LCD screens, CAYIN
05-06-2009 | Media & Telecommunications
MEDIA BROADCAST GmbH
FIFA Confederations Cup South Africa 2009 and 2010 FIFA World Cup(TM)
MEDIA BROADCAST to deliver expertise as media partner for 2010 FIFA World Cup(TM) in South Africa Bonn, May 4, 2009 - MEDIA BROADCAST has partnered with South African telecommunications company Telkom SA and systems integrator Telecom 180, to provide video contribu-tion services for the FIFA Confederations Cup South Africa 2009 and the 2010 FIFA World CupTM South Africa. The partnership teams the diverse capabilities of each role-player and leverages the
Comments about openPR
OpenPR is clearly structured and remains true to its principle of confining itself to the essential parts. OpenPR has proven to be a very good and reliable partner to our media agency: Within the shortest time the releases are online and go down well with the media representatives. The success of OpenPR is reflected in the steadily increasing number of press releases. It is good that OpenPR exists!
Ursula Koslik, Director Marketing & PR, F+W Hamburg