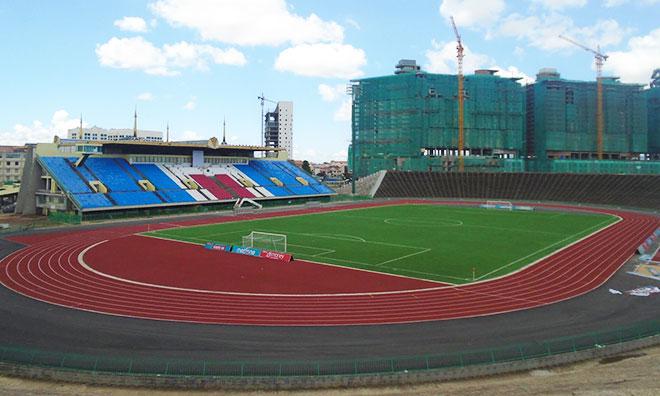 Dating back to 1963, the iconic National Olympic Stadium of Phnom Penh, Cambodia, has been given a facelift in the form of a brand new pitch, utilising artificial grass for the first time in the stadium’s chequered half century of history.Installed by CCGrass, the new pitch has been certified as a FIFA 2 star field, one of the last such classifications since FIFA’s decision last year to replace the 1 and 2 star system with FIFA QUALITY and FIFA QUALITY PRO that contain more stringent requirements for football turf installations.The CCGrass product Stemgrass was selected for the installation. With a “spine” running through the middle of each blade, Stemgrass is valued for its durability. After 50,000 cycles of Lisport rolling, it does not show any signs of diverging or splitting. The surface is resilient enough to allow natural ball behaviour, give uniform traction and reduce shock to the joints and ankles.Other pitches that utilise Stemgrass include Camp de Sports de Santa Barbara, Spain (FIFA 2 star), Hollviken IP, Sweden (FIFA 2 star) and the British School of Nanjing, in CCGrass’s home city.With the new pitch now in operation, Phnom Penh’s National Olympic Stadium is playing host to the bulk of this year’s football fixtures in the Metfone C-League, also known as the Cambodian Premier League, sponsored by the Cambodian telecommunications giant.Despite its moniker, the 50,000 seat stadium has never hosted the Olympic games. However, in the 1966 FIFA World Cup it inadvertently hosted a qualifier game between North Korea and Australia; as Cambodia was one of the few countries with friendly ties to North Korea, Head of State Norodom Sihanouk, an ally of Kim Il-sung, offered the stadium’s use for the match.CCGrass, the largest manufacturer of artificial grass in the world, is dedicated to providing the best artificial turf for both athletic and landscape purposes. After more than 10 years of focused development, CCGrass products have served clients from multiple regions with varying needs, including professional football clubs, government bodies, schools, and countless households around the world. CCGrass products have been installed in more than 90 countries with a total volume of more than 90,000,000 m².CCGrass Floor 19, Dadi Building, No. 56 Huaqiao Road, Nanjing, Jiangsu, China Telephone: +86-25-69811666 E-mail: info@ccgrass.com Press Contact: Mr. Deng Hua

05-28-2021 | Sports
CCGrass
FIFA Quality Field for the Frajanas Municipal Stadium in Spain
CCGrass(CCGrass.com), the world’s largest synthetic turf manufacturer, and FIFA Preferred Producer, has recently completed a FIFA Quality pitch for the Frajanas Municipal Stadium (ESTADIO MUNICIPAL FRAJANAS) in Spain. The installation of a new artificial grass in the Frajanas sports complex is a work of improvement action with the fundamental objective of responding to a manifest need for the various sports groups and users. It is about readapting the football field with the
01-31-2018 | Sports
CCGrass
CCGrass Appointed as FIH Preferred Supplier
CCGrass, the world’s largest producer of artificial turf products is delighted to announce that the International Hockey Federation (FIH) has confirmed CCGrass’s appointment as an official FIH Preferred Supplier. The Preferred Supplier status is aimed at ensuring only the highest quality hockey pitches are installed, no matter what level of play is required. Within the FIH Quality Programme, being a Preferred Supplier is the highest honor achievable and only goes to
01-24-2018 | Sports
CCGrass
Press Statement
CCGrass, the world’s largest producer of synthetic turf is pleased to announce the appointment of Bryn Lee as Chief Executive Officer ('CEO') for the new European office, to be opened shortly in Frankfurt am Main, Germany. Bryn Lee joins CCGrass having previously been Managing Director at TigerTurf EMEA and Global Business Director for Bonar Yarns, where he helped establish and implement long term sales and marketing strategies. Bryn has also been
01-11-2018 | Sports
CCGrass
CCGrass Introduce New Yarn Innovations at FSB Show
World leading synthetic turf manufacturer CCGrass announce the introduction of three new yarn additives into their extensive product portfolio With a full range of products designed, tufted and backed before delivery into the global sports and landscape market, CCGrass is well placed to understand special situations that occasionally arise. In the development of unique additives that are applied within its yarn, CCGrass now has systems that are designed to cope with