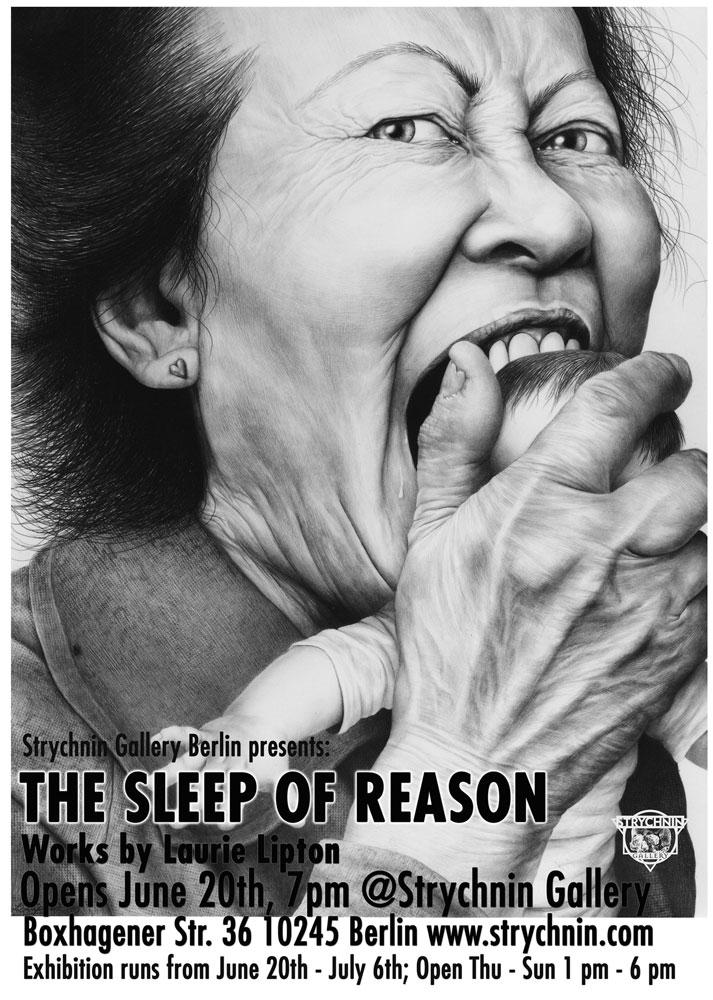 "Love Bite" by Laurie Lipton was inspired by Goya's painting "Saturn devouring his Son" from 1819.

Inspired by Francisco de Goya. Opening reception for the artist on June 20th, 7 pm. Breathtaking detail is one of the most astonishing characteristics of Laurie Lipton’s work. Her large format pencil drawings are created in the same manner the old masters used to paint: hundreds, if not thousands of little lines create areas of tone – a tedious way of drawing, yet one that allows her to achieve an amount of detail and luminosity that is almost unparalleled. Lipton’s work brings out the strange and grotesque in everyday life. Aiming for a psychological Realism, her works for “The Sleep of Reason” were deeply inspired by Spanish artist Francisco de Goya (1746 - 1828). Goya, who has portrayed the horrors of his time quite realistically in his series of etchings titled “The Disasters of War,” yet has also created fantastic and mythological paintings such as “Colossus,” has been a tremendous influence on Lipton’s work. “Love Bite,” for example, which measures an impressive 137.4 x 96.5 cms, shows a woman on the verge of biting into a baby’s head as though it were an apple, a translation of Goya’s work “Saturn devouring his Son” into something relevant to the artist’s own emotional life. About her “The Disasters of War,” she says: “Goya saw the horrors of conflict being enacted around him on the streets where he lived. I saw the recent war in Iraq in the comfort of my own bedroom contained in a neat, recently dusted TV set. Killing and humanities' atrocities have become removed and sanitized in the 21st century. Even the bloody bombing of Guernika can be made into art that fits on to a nice coffee mug. While I sip my coffee and eat my meals I can watch incredibly terrible things happening around the world on the news, complete with computer graphics and commercial interruptions. Is this not strange?” Born in New York, Laurie Lipton has made her home in London after living in Holland, Belgium, Germany and France. She is exhibited internationally. This is her first solo show in Germany. Opening night: June 20th, 7 pm Duration: June 20th – July 6th 2008 Open: Thu-Sun 1–6 pm and by appointment Strychnin Gallery Boxhagener Straße 36 10245 Berlin Phone: 030- 9700 2035 Iris Bitter production@strychnin.com www.strychnin.com With galleries in three bustling hotspots – New York City, Berlin, and London – Strychnin Gallery is a playground for artists from all around the globe. It is a place where collaboration is encouraged, new projects are constantly developed and creativity is the one and only thing that truly counts. Owned by charismatic curator Yasha Young, Strychnin is dedicated to presenting emerging American artists to the European art world and vice versa. It features a variety of artists with particular individual styles rather than artists belonging to a collective “hip” movement. If you insist on putting a label on them, try lowbrow turned highbrow, pop surrealism or fantastic realism among others. Founded in Brooklyn in 1998, the gallery opened a European showroom in Berlin in 2002. The US gallery has since moved to a location in Manhattan’s Chelsea district, opening with a group show featuring over 70 artists in October of 2006. Strychnin Gallery opened a third location in East London’s vibrant art scene right off of Brick Lane in October 2007. The gallery participates in major international art fairs on a regular basis, including Bridge Art Fair, Liste, or Art21 in Cologne, which appointed gallery owner Yasha Young to its selection committee in 2008.

You can edit or delete your press release Strychnin Gallery Berlin presents: The Sleep of Reason - Drawings by Laurie Lipton here