Watch how Rajkummar Rao got 'Trapped' 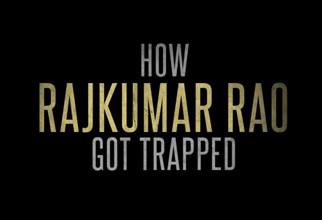 The trailer of Rajkummar Rao's 'Trapped' intrigued us much than our expectations. The makers wisely kept the story line of the film under wraps and Rajkummar's quintessential acting made the audience glued to their seats. While shooting a survival thriller like this is not a cake walk, the makers along with the actor had to undergo a lot of patience and striving. The making video shows how the filmmaker shot his film and how Rajkummar Rao got trapped.The video starts with a few frames from the trailer when Rajkummar gets actually trapped in his own apartment and is seeking for help. When Vikramaditya Motwane heard the story of the film, he thought of an actor who would deliver right emotions and according to him Rajkummar was the actor who can do that. The director can be seen showing the actor how to do certain types of scenes in some frames.For Rajkummar portraying such a character was not easy, he said that he will never torture himself like Shaurya who lived on black coffee and carrots for days. But he enjoyed the whole process of challenges he got as an actor while making this film. He is so dedicated as an actor that for a scene he actually cut his own finger to get the scene right. The making video is a treat for those who enjoyed the trailer.'Trapped' helmed by Vikramaditya Motwane will hit the theatres on March 17, 2017.Watch the making here.FRIDAYMOVIEZ.COM is a chic movie portal bringing you the best of Bollywood and Hollywood in terms of the up-to-the-minute news, movie reviews and trailers, celebrity images, videos and profiles, exclusive inside information comprising original features, live event coverage, red carpet events, comprehensive archives and more.#G-1, New Udyog Mandir 2 Moghul Lane, Mahim (W) Mumbai 400016 India