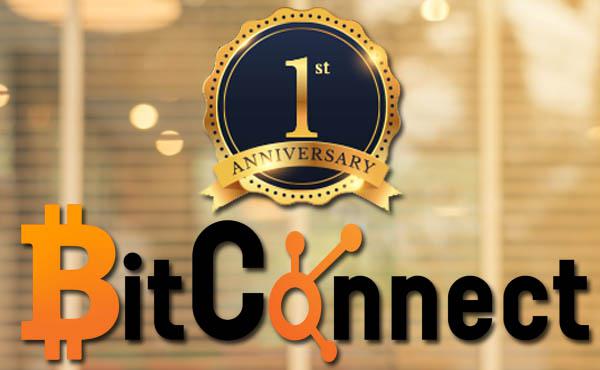 BitConnect Bitcoin Community Reaches First Anniversary in StyleLast year at this time, a dream took the first steps to becoming reality. In a digital world full of Bitcoin websites, but short on an integrated community, bitconnect.co was born, and the world of Bitcoin has never been the same. February marks the one year anniversary of this crypto unicorn, and it is time to regale in its achievements and look towards its future in Year Two.In less than one year, BitConnect’s online community has gained over 50,000 around the world, added a news department, engaged with online leaders like Kim Dotcom, successfully launched its own digital currency, added a Bitcoin wallet, an innovative Bitcoin lending system, and surged from zero traffic to a top 80k Alexa ranking. Plenty of hard work and good times were had along the way.“BitConnect mission is to provide crypto education and provide multiple investment opportunities to empower people financially,” says BitConnect Head of Development, Satao Nakamoto. “We have placed most crypto features that you can see on other websites, so BitConnect has just been preparing itself for the long run in crypto-world. “After one of the most productive initial years for any Bitcoin-related business in history, it is time to start building for the future. So what can BitConnect do for an encore? Nakamoto has a lengthy to-do list, but it always starts with the BitConnect members.“There are many features and functions to come in 2017,” adds Nakamoto. “BitConnect’s mission is to become the leading crypto-community in the world when it comes to functionality and user base by the year 2020. We have already started one structure opportunity with BitConnect where each country’s top member will have a special crypto-website built in their local language."The official BitConnect mobile Android and IOS app launches this month, which should also increase demand and price. Later in 2017, the BitConnect Coin will see more innovations and convenience features added. This includes the BCC Mining and Staking Pool Launch, providing a way for the community to earn, a BitConnect Coin reward with mining & minting, plus a new mobile wallet app & paper wallet. The BitConnect coin will also gain its own “Smart Card” in 2017, bringing all of the everyday usability you demand in a digital currency.BitConnect has become simply the world’s fastest growing online Bitcoin community. For more information on BitConnect, visit https:/bitconnectcoin.co/A self regulated Financial systemBitConnect is an open source all in one bitcoin and crypto community platform designed to provide multiple investment opportunities with cryptocurrency education where it is entirely possible to find the independence we all desire, in a community of like-minded, freedom loving individuals who, like you, are seeking the possibility of income stability in a very unstable world.THE PANORAMA PARK STREET ASHFORD ENGLAND TN24 8EZ.Company Number :10278342.