A startup wants to revolutionise the conveyor industry 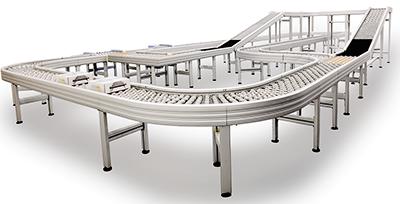 The young Swiss startup Avancon SA (www.avancon.com) has set itself the goal to revolutionize the unit handling systems in distribution and logistics centers. They offer now a new modern and very innovative conveying system. This will be distributed worldwide by manufacturers of conveyor systems and logistic system integrators. The system has been developed by Dieter Specht, the founder of the Interroll Group.The car industry, the computer industry and even the machine industry present every few years new and modern designed models. Why? To be able to attack new markets and new customers. However, it is hard to see something new in the conveyor industry. Most of the unit conveyor systems were developed 15, 20 or even 50 years ago and are still sold today in a construction, which remembers on the patents of the British toy manufacturer Frank Hornby, who has already registered his patent of a “Meccano” kit in 1901.Now, the two young founders of the start-up Avancon SA are ready to revolutionize the conveyor industry with this new and streamlined concept. It's full of innovative and functional ideas and has been patented worldwide. Originally, Dieter Specht had developed this system for Interroll. But it it didn't fit to their philosophy. So he found two enthusiastic entrepreneurs: Denis Ratz, has a bachelor of science in business informatics and Dr. Daniele Gambetta, who has a PhD in electric machines. They established in Ticino/Switzerland a new start-up under the name Avancon SA (from Avant-garde and Conveyor). The CEO, Denis Ratz showed the new conveyor system to some large and important manufacturers of conveyor- and logistics-systems and got a very positive response.“Of course, we wanted to see the reactions to our completely new and very modern designed conveyor concept,” says Denis Ratz. “Most were positively impressed about the outstanding design. I could answer all their questions about the functions and requirements of the market. After these meetings with CEOs and technical managers of big and well-known companies I was highly motivated. Now we are ready. Everything is finished and tested. We can deliver. Several potential customers will visit our large test facility here in Ticino. We believe that the functions and the many advantages of this innovative system will convince them.”Avancon SA invested heavily into development, in machines, in molds, patents and in the production. With a clever marketing concept enables an exclusive group of Conveyor Manufacturers and System Integrators worldwide to promote the system under their own label/brand and house color to the final market, the operators of logistics and distribution center. Denis Ratz explains: “We want to offer something avant-garde to the manufacturers of conveyors and intralogistics systems. But we don't want to interfere with the market of our customers and we will not offer to distribution- and logistics-systems directly to operating companies. Eventhough this modern system will catch the eye of every manager of this industry.” The partner and head of technique, Dr. Daniele Gambetta, is an experienced specialist for electronic control and DC-motors. He has patents of completely new DC-motors, which will also be integrated in the future in the Avancon Conveyor System.“Today - in the digital age of 'industry-4' - the electronic connectivity is of enormous importance. I was very fascinated by the ideas of Dieter Specht, so I have joined this young start-up,” says Dr. Daniele Gambetta. “I have never seen such a convincing new concept in the conveyor industry. Everything is completely different, new, safer and much better. We believe that about 80 % of all goods up to 50 kg weight, which have to be transported millions of times worldwide every day, can be handled with this new system.”Meanwhile, the design has been awarded by the internationally well-known “Red-Dot” price in Germany and also by the very coveted throughout Asia, “Good-Design” award in Japan.The two partners have a lot of courage to break into such an established market today. But who would not want to offer their customers something very aesthetic, even revolutionizing, which differs to all previous designs? Why aesthetic? Well, ask yourself: would you buy today a machine, which is not modern covered? Now you can offer your customers something extraordinary that combines innovation with emotions.Denis Ratz says: "We are very positive about the future. We have just moved into a newly built modern factory, which matches our DNA. Here we have a daily capacity production of up to 400 meters conveyor tracks of our new ZPC- system. Anyone who builds conveyor systems by himself can obtain all individual elements from us and so use the patents free of charge. Several customers want to exhibit the new system at one of their upcoming trade fairs. That's fantastic!"'ZPC' system means "Zone Powered Conveyor" system, in which each zone is controlled and driven separately. The system is extremely flexible and adaptable. It is capable of slow or fast transporting in any desired line and, where necessary, can accumulate without pressure. The system can also communicate with higher IT or Bus system very easily and at significantly reduced installation cost. Of course, it transports in all directions, with all the functions an engineer wants for logistic systems.Last but not least it seems to be much cheaper than it looks.Avancon developed an innovative and futuristic conveyor system, which is controlled in zones. It has been patented worldwide and also won the Red Dot Award and the Good Design Award.Avancon SA via Campagna 27 6595 Riazzino Ticino Switzerland Phone: +41 91 2221010 e-mail: media@avancon.com

11-26-2018 | Logistics & Transport
Avancon
84% Energy efficiency with the new Avancon conveyor system
The new conveyor system of the Swiss company Avancon SA, in Riazzino, is very safe and looks modern and impressive. In addition, investment, installation and maintenance costs are drastically reduced. But above all there is huge savings in energy; an amazing contribution to achieving the climate goals. December 2015: At 19:16, French Foreign Minister Laurent Fabius suddenly returned on the stage, flanked by senior UN officials. The last compromises were resolved,
09-12-2017 | Logistics & Transport
Avancon
Invisible power supply for conveyor systems
Together with the well known Producer of transformers and Power Supplies, the Puls-Group in Munich the Start-Up Avancon in Riazzino, Switzerland, developed a universal Power-Supply Unit for the field-bus AS-interface of about 30 V and for up to 20 DC-Motors of 24 V or 48 V altogether combined and build in a Crossbeam of the conveyor frame construction – which is invisible from outside. – Ingenious! It in called “3-in-1” Power