Strychnin Gallery London presents: In the Absence of Colour 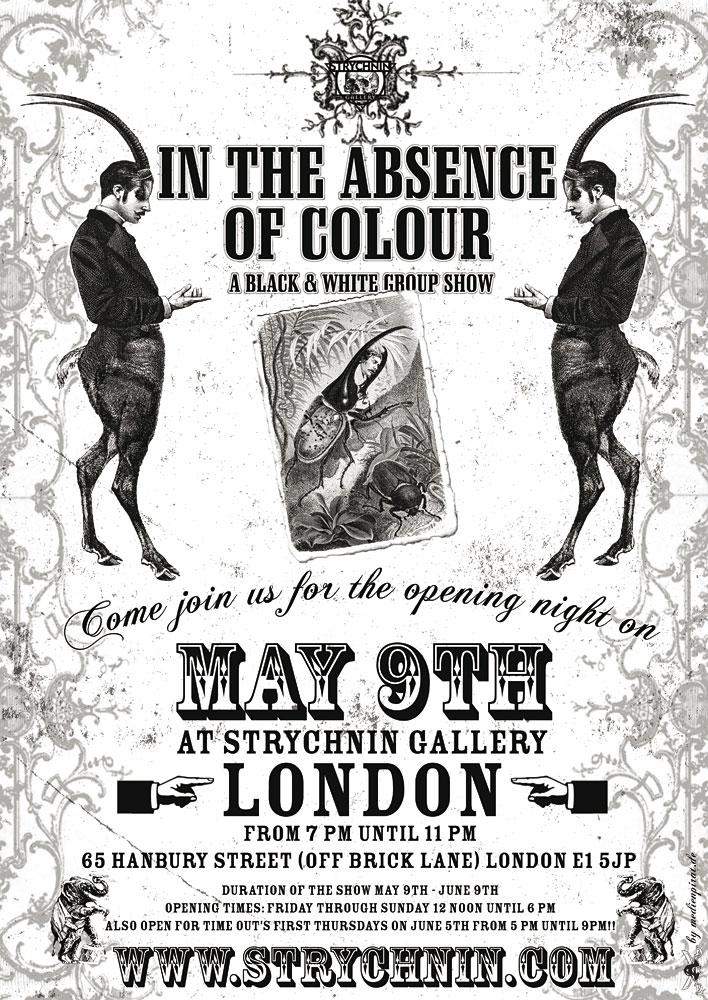 Images by Dan Hillier, who will be part of the Strychnin Group Show opening May 9th in London.

A Group Show featuring Black & White works by over 16 international artists. Opening reception May 9th, 7 pm. Do you know if you dream in colour? Remember when all movies were black and white? Remember the days when television was black and white? Chances are that you do not. But you might remember when most computer screens were black and white, and there are still some newspapers out there that are printed without colour images – a rare and unusual thing, it seems. Is black and white visual representation a dying art? Looking at the photography market, where a lot of black and white films and papers have become hard to get or are no longer available, it is easy to become nostalgic for a time lost. Black and white brings us back to the beginning.Strychnin Gallery asked over 16 artists to get into the spirit and create new works under the heading “The Black and White Show,” since changed to “In the Absence of Colour.” By restricting themselves to what is also called monochrome, greyscale, or (if even shades of grey are absent) binary imagery, the aim of this show is to shift the attention upon the works, yet also onto our perception of colour – or a lack thereof. How do we see the world? What do we expect from art? What you will find in this amazing Strychnin group show are sculptures, drawings, photographs, paintings and mixed media works adhering to this guideline – and some that do not. Every now and then there will be an outburst of colour in some of the works that is all the more striking. In the Absence of Colour – a Black & White Group Show Opening night: May 9th, 7 pm – 11 pm Show runs until: June 9th, 2008Strychnin Gallery London 65 Hanbury Street London E1 5JP +44 207 247 5666 Contact: Iris Bitter// Public Relations Mail: production@strychnin.com // Web: www.strychnin.com Open: Fri - Sun 12-6 and by appointment Open for Time Out’s First Thursdays on June 5th 5 pm – 9 pmWith galleries in three bustling hotspots – New York City, Berlin, and London – Strychnin Gallery is a playground for artists from all around the globe. It is a place where collaboration is encouraged, new projects are constantly developed and creativity is the one and only thing that truly counts. Owned by charismatic curator Yasha Young, Strychnin is dedicated to presenting emerging American artists to the European art world and vice versa. It features a variety of artists with particular individual styles rather than artists belonging to a collective “hip” movement. If you insist on putting a label on them, try lowbrow turned highbrow, pop surrealism or fantastic realism among others. Founded in Brooklyn in 1998, the gallery opened a European showroom in Berlin in 2002. The US gallery has since moved to a location in Manhattan’s Chelsea district, opening with a group show featuring over 70 artists in October of 2006. Strychnin Gallery opened a third location in East London’s vibrant art scene right off of Brick Lane in October 2007. The gallery participates in major international art fairs on a regular basis, including Bridge Art Fair, Liste, or Art21 in Cologne, which appointed gallery owner Yasha Young to its selection committee in 2008.

You can edit or delete your press release Strychnin Gallery London presents: In the Absence of Colour here