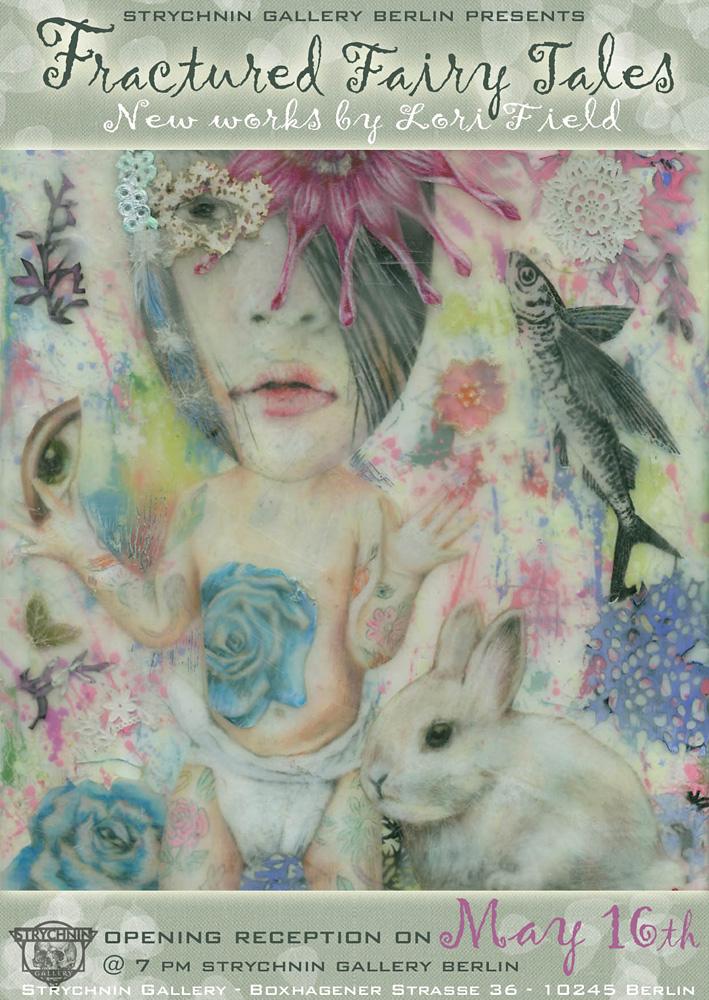 Lori Field - Enfant Terrible. This work is part of the exhibition opening at Strychnin Gallery on May 16th.

Opening reception for the artist on May 16th 7 p.m.Dreamy tattooed figures appear to be sleeping behind an opaque veil. Colorful animals and flowers are floating against tactile backgrounds of lace. Lori Field’s encaustic paintings are set between reality and dreams, they show us strange and mysterious worlds in which hybrid creatures such as two-headed cats with human bodies are oddly normal. Follow the white rabbit and enter wonderland – you’re in good company.American artist Lori Field creates obsessive drawings that are combined with encaustic painting, a centuries old technique going back to ancient Greece, “enkauston” being the Greek word for “to burn into.” Recurring creations in her work are human/animal hybrids that retain the physical characteristics of both. Not entirely adapted to either their own environment or the human world, they are at odds with their surroundings. Field also frequently portrays animals that cannot speak or cry out – such as rabbits, deer, or flying fish – as a way of emphasizing the hyperawareness that comes from listening intently, without speaking. Animals lack self-consciousness or artifice, so the animal-like figures provide a means for emotive personification, characterizing or exhibiting human motives and foibles, offering us possibilities of interpreting their behavior.As her shape-shifting creatures morph, are they 'becoming-animal' or 'becoming-human'? Which transformation would leave them better off? These human/animal archetypes – a cast of reoccurring characters found in her work – create intuitive narratives that explore themes of loss, rebirth, identity, denial, alienation, loneliness and ultimately, human vulnerability. Lori Field explores and visualizes the concept of 'the other.' Her paintings and drawings are deliberately intimate, depicting seductive creatures in settings that seem as yet untouched by the human species, but which evoke a flawed, human fragility nonetheless. Her work has been exhibited all over the USA and in Europe, and can be found in many public collections.Opening night: May 16th, 7 pm Duration: May 16th – June 16th 2008Strychnin Gallery Boxhagener Straße 36 10245 Berlin PR Contact: Iris Bitter Phone: +49 30 9700 2035 production@strychnin.com www.strychnin.com Open: Thu-Sun 1–6 pm and by appointmentWith galleries in three bustling hotspots – New York City, Berlin, and London – Strychnin Gallery is a playground for artists from all around the globe. It is a place where collaboration is encouraged, new projects are constantly developed and creativity is the one and only thing that truly counts. Owned by charismatic curator Yasha Young, Strychnin is dedicated to presenting emerging American artists to the European art world and vice versa. It features a variety of artists with particular individual styles rather than artists belonging to a collective “hip” movement. If you insist on putting a label on them, try lowbrow turned highbrow, pop surrealism or fantastic realism among others. Founded in Brooklyn in 1998, the gallery opened a European showroom in Berlin in 2002. The US gallery has since moved to a location in Manhattan’s Chelsea district, opening with a group show featuring over 70 artists in October of 2006. Strychnin Gallery opened a third location in East London’s vibrant art scene right off of Brick Lane in October 2007. It participates in major international art fairs such as Bridge Art Fair, Liste, and Art21 in Cologne, to which Strychnin owner Yasha Young was appointed to the selection committee in 2008.

03-19-2020 | Advertising, Media Consulting, …
Ameri Research Inc.
Field Service Management Market Outlook To 2024
Field Service Management Market Outlook To 2024: Key Solution Categories (Reporting & Dashboards, Mobile Field Execution, Work Order Management, Billing & Invoicing), Deployment (On-Premise, Cloud), End-Use, Regional Segmentation, Competitive Dynamics, M&A Insights, Pricing Analysis (IPP, OPP, RAP) And Segment Forecast The global field service management market was valued at $1,493.6 million in 2016 and is forecast to grow at a strong CAGR of 11.2% between 2017 and 2024, culminating to global
11-22-2017 | Industry, Real Estate & Constr …
Zap Shrink Wrap
Shrink Wrap in the Nuclear Field
Shrink wrap has a very unique feature that allows it to take the exact shape while simultaneously creating an air tight seal around any object. Once it has been “shrunk,” the wrap becomes as tight as a drum and is ideal for nuclear decommissioning activities. It has proven to be a successful product in the nuclear industry on many projects of all sizes throughout the country. Shrink wrap blocks alpha and
11-13-2017 | Advertising, Media Consulting, …
Scalar Market Research
Cloud Field Service Management Market
Cloud Field Service Management is a system developed for managing field operations through a mobile application or software. This software solution enables the companies to manage field resources such as vehicle location, field worker activity and ensure delivery of spare parts to the operational field. This solution assigns work according to the skills and geographical location of the field employee and checks inventory for the availability of spare parts. The
04-12-2017 | Leisure, Entertainment, Miscel …
QYresearchreports
Europe Field Hockey Market Report 2017
This report studies sales (consumption) of Field Hockey in Europe market, especially in Germany, France, UK, Russia, Italy, Spain and Benelux, focuses on top players in these countries, with sales, price, revenue and market share for each player in these Countries, covering Brine CranBarry Grays Harrow STX Unbranded Get Free Research Summary Of The Repot: http://www.qyresearchreports.com/sample/sample.php?rep_id=938538&type=E Market Segment by Countries, this report splits Europe into several key Countries, with sales (consumption), revenue, market share and growth rate of
11-06-2010 | Industry, Real Estate & Constr …
ROTOCONTROL
ROTOCONTROL Appoints Field Applications Engineering Manager
Ahrensburg, Germany (November 05, 2010) – ROTOCONTROL today announced the extension of its service and technical team with the appointment of Manohar Dhugga as Field Applications Engineering Manager. With over 15 years of engineering and field service experience in the narrow web finishing industry coupled with extensive vision inspection expertise including AVT and Nikka Research systems, Manohar will provide technical support and service for ROTOCONTROL customers in North America in
08-13-2010 | Leisure, Entertainment, Miscel …
AristoMedia
Chelsea Field Visits WITL in Lansing, MI
(Nashville, TN – Aug. 10, 2010) Moxy Records recording artist Chelsea Field recently traveled through the state of Michigan on the second leg of her extended radio tour, stopping at stations in Detroit, Flint and Lansing, among others. Since May, Field has been on the road visiting more than 60 Country radio stations in support of her debut single, “Things I Should’ve Said.” The single debuted last month
Comments about openPR
9 o'clock: discuss press release with client, 10 o'clock: submit release to openPR, within the briefest possible time release is published and displayed in a prominent place on openPR.de. I am thrilled!
Zehra Spindler, Calypso Now! - Communication Agency