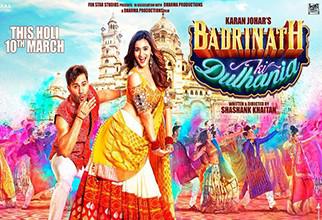 Varun Dhawan and Alia Bhatt will recreate the magic of 'Humpty Sharma Ki Dulhania' in their upcoming film 'Badrinath Ki Dulhania.' The film is said to be a franchise of the earlier installment and not a sequel. After unveiling the posters, the makers of the film have now released the first official teaser of the film. Alia Bhatt shared it on her Twitter by tweeting, "And here we gooooooo!!!!!!! http://bit.ly/BadriKaTeaser @Varun_dvn"The teaser introduces Varun Dhawan as Badrinath Bansal aka Badri. Badri is seen posing in front of the camera as per the instructions given by the photographer at a place which looks like a photo studio. Posters of Kareena Kapoor Khan and Deepika Padukone can be seen on the either sides of where he is posing. A guy with good looks and hot temper, and loaded with funny antics he is definitely not the local desi boy which we can see in the beginning. 'Badrinath Ki Dulhania' is directed by Shashank Khaitan and will release on March 10, 2017.Watch the teaser here.FRIDAYMOVIEZ.COM is a chic movie portal bringing you the best of Bollywood and Hollywood in terms of the up-to-the-minute news, movie reviews and trailers, celebrity images, videos and profiles, exclusive inside information comprising original features, live event coverage, red carpet events, comprehensive archives and more.#G-1, New Udyog Mandir 2 Moghul Lane, Mahim (W) Mumbai 400016 India

10-21-2021 | Advertising, Media Consulting, …
QY Research
Sodium Pyrosulfite Market 2021 Application Development Potential And Regional An …
LOS ANGELES, United States: QY Research offers an encyclopedic study of the global Sodium Pyrosulfite market with holistic insights into vital factors and aspects that impact future market growth. The global Sodium Pyrosulfite market has been analyzed for the forecast period 2021-2027 and historical period 2015-2020. In order to help players to gain comprehensive understanding of the Global Sodium Pyrosulfite market and its critical dynamics, the research study provides detailed
10-11-2021 | Industry, Real Estate & Constr …
Global Market Monitor
Industrial Grade Sodium Metabisulfite Market In-depth Analysis by Statistics & O …
This Industrial Grade Sodium Metabisulfite market report provides a comprehensive review of the key aspects that will drive market growth, including market drivers, constraints, and opportunities, challenges, current trends, and technical breakthroughs. This Industrial Grade Sodium Metabisulfite market report includes industry analysis, growth development, and current trends that are extremely beneficial to new industry players joining the market. This Industrial Grade Sodium Metabisulfite market report examines the
10-11-2021 | Business, Economy, Finances, B …
MarketQuest.biz
Global Plastic Raschig Rings Market 2021 Development Environment - Naturegreen E …
MarketQuest.biz presents an in-depth assessment through Global Plastic Raschig Rings Market 2021 by Manufacturers, Regions, Type and Application, Forecast to 2026 by giving the sector's current situation and significant drivers. It accurately delivers the necessary information and cutting-edge analysis to assist in the formulation of the ideal business plan and the determination of the appropriate path for fast growth for the players in the industry. This is accomplished by a
03-18-2020 | Industry, Real Estate & Constr …
Up Market Research (UMR)
Plastic Raschig Rings Market Business Opportunities 2026 - Top Companies are Nat …
Plastic Raschig Rings Market Forecast 2020-2026 The Global Plastic Raschig Rings Market research report provides and in-depth analysis on industry- and economy-wide database for business management that could potentially offer development and profitability for players in this market. It offers critical information pertaining to the current and future growth of the market. It focuses on technologies, volume, and materials in, and in-depth analysis of the market. The study has a section
04-27-2019 | Industry, Real Estate & Constr …
Up Market Research (UMR)
Sodium Pyrosulfite Market 2019 | Worldwide Market Outlook 2025 | Major Manufactu …
As per the latest research study published by Up Market Research, “Global Sodium Pyrosulfite Market” is estimated to grow at a healthy CAGR % in the coming years. The research report showcases qualitative and quantitative estimations by the industry analysts. The report documents first-hand data, post verification from the industry experts along with each industry manufacturers by the market valuation. Sodium Pyrosulfite Market report also gives an extensive analysis of
08-13-2018 | Science & Education
Ajeenkya D Y Patil
Varun Gandhi advocates Higher Spend on Research and Development
Excitement and Spirits were at an all time at the D. Y. Patil Campus in Navi Mumbai as they welcomed Varun Gandhi, Loksabha MP from Sultanpur. Also present on this occasion were Dr. Ajeenkya D.Y. Patil and Vijay D. Y .Patil. Dr. Ajeenkya D.Y. Patil, Chairman, Ajeenkya D. Y . Patil Group, in his address expressed deep admiration for the body of social work undertaken by Varun Gandhi and his
Comments about openPR
I can't but agree to the positive statements about your portal: easy to use, clear layout, very good search function, and quick editing!
Jens O'Brien, Borgmeier Media Communication