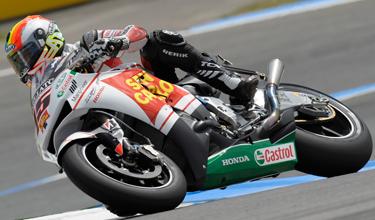 Castrol-backed Team San Carlo Honda Gresini riders Shinya Nakano and Alex de Angelis made real progress after racing in difficult conditions in the Portuguese Grand Prix on the Estoril Circuit near Lisbon, while out front rising Yamaha star Jorge Lorenzo took first place - it was the 20-year-old Spaniard's first MotoGP win.Nakano had a difficult race after a slow start in light rain prevented him from fighting for the lead. The rain was only in certain parts of the track, which meant traction varied wildly from corner to corner. By the time the Japanese rider got up to speed he wasn't able to make up any further places and finished tenth.The conditions were as difficult as any the riders had encountered all season. The rain was heaviest on lap three before abating, but the track was still slick in spots even with the race half run. While many around seemed to succumb to the treacherous conditions, the San Carlo Honda Gresini riders both kept their wits about them and waited for an improvement before moving forward.Alex de Angelis fought through illness on a weekend he could easily have been bed-ridden. The Italian arrived in Estoril suffering from tonsillitis and a high temperature and was racing at far from full fitness.Nakano made up three positions to finish tenth after finishing the first lap in 13th place. De Angelis made up four spots to finish behind his team-mate. Neither was under pressure at the end, though Nakano made a valiant effort at stealing ninth place from Loris Capirossi."It was a tough race because I didn't have a good pace at the start and I lost a few positions on the opening lap," he said. "Towards the midway point I was able to improve my lap times and I tried to catch Capirossi, but I couldn't get past him.De Angelis admitted the day hadn't gone well after battling the flu for two days."Today was difficult for me because I ended up lapping alone after just a few laps and it's not easy to maintain your concentration, but at the end we've improved on our grid position, so that's good," he said.The next race is the Chinese Grand Prix on 4 May.Portuguese GP top six finishers * 1 J Lorenzo - Yamaha * 2 D Pedrosa - Honda * 3 V Rossi - Yamaha * 4 C Edwards - Yamaha * 5 J Hopkins - Kawasaki * 6 C Stoner - DucatiTeam News: Collina spreads word on IndexThe Castrol Performance Index, a data analysis system that will track players in every match during this summer's UEFA Euro 2008TM tournament, was introduced to the MotoGP paddock during a special presentation in the San Carlo Honda Gresini hospitality unit on Saturday. Pierluigi Collina, widely regarded as one of the world's best referees, helped develop the system. It can be accessed at www.castrolindex.com. Castrol's European Motorcycle Marketing Manager Andrea Soldo said: "MotoGP is a series that has heavily featured data analysis for many years, so it is interesting to compare the system that Collina has helped to develop with the telemetric system of a motorcycle racing team."Back to Shanghai for the last timeAfter a brief two race sequence in the European homeland of the MotoGP World Championship, the teams pack up once again for their final visit to the Shanghai Circuit in China. The flyaway, which comes between races in Portugal and France, will be the last visit to the ultra-modern facility on the outskirts of China's most bustling city. The race, which will have had a four-year run, is likely to be replaced with a round in Hungary from next year. For more information on the Castrol-sponsored Honda Gresini team please visit the Racing and Sponsorship section of our homepage:http://www.castrol.com/castrol/subsection.do?categoryId=9016838&contentId=7030261For more information on Castrol's sponsorship activities related to sports please visit:http://www.castrol.com/castrol/genericsection.do?categoryId=3208&contentId=7034605http://www.castrolindex.comMotor Oil and Lubricants Castrol UK and Ireland Castrol UK Ltd, Wakefield House, Pipers Way, Swindon SN3 1RE United Kingdom http://www.castrol.co.uk Press contact: Caroline Topping Phone: +44 (1793) 452781 eMail: Caroline.topping@uk.bp.comCastrol is the world's leading specialist provider of lubricant products. Most people know Castrol oil for vehicles such as car oil, engine oil and synthetic oil as well as motorcycle oil. But there's not just Castrol motor oil, we also produce lubricants for vehicles in transport and construction industries, such as heavy goods vehicles, buses and earth moving machinery. Castrol UK feature the brands EDGE, Magnatec, GTX, SLX Professional, Elixion, Enduron and Tection among others.

You can edit or delete your press release Moto GP: Portuguese here

05-22-2008 | Sports
Castrol UK and Ireland
WTCC: Priaulx on the podium in Spain
Castrol BMW Team UK driver Andy Priaulx got his World Touring Car Championship campaign back on track after claiming a hard-fought podium finish in the second race of the third round of the championship at Valencia. Priaulx’s first podium finish of the season came after earning himself a place at the front of the reverse grid by taking seventh in race two. After taking the lead at the start of the
05-22-2008 | Sports
Castrol UK and Ireland
European Football Championship 2008: Chopping and changing
The axe continues to fall – but there’s a surprise return for three veterans while two coaches heed the advice of the Castrol Index... Five becomes four France coach Raymond Domenech has played Juventus striker David Trezeguet five times since the 2006 World Cup, but that won’t become six this summer. Trezeguet - third on his country’s all-time list behind Thierry Henry and Michel Platini with 34 goals – has lost out
05-21-2008 | Sports
Castrol UK and Ireland
Moto GP: Castrol riders take points at Le Mans
Both Castrol-backed Team San Carlo Honda Gresini riders Shinya Nakano and Alex de Angelis added to their points tally in the French GP at Le Mans on Sunday, finishing tenth and 12th respectively in a difficult race run at a furious pace. Despite the points, the results were again disappointing for team chief Fausto Gresini, struggling to get the satellite-team Honda machines and riders to display their full capabilities. \"Our potential is
05-21-2008 | Sports
Castrol UK and Ireland
European Football Championship 2008: Mind over matter
Castrol Index sports psychologist Andy Barton reveals why goal celebrations, positive thinking and smiling faces could be key to success this summer… “Getting a player into the perfect frame of mind is a fine balancing act. Some players perform best when they are highly charged; others need to be more relaxed. Cristiano Ronaldo, for instance, is an extrovert who needs to feel ‘pumped up’ to reach his best, and can be

07-10-2020 | Business, Economy, Finances, B …
Inszone Insurance
BHMS Invests in Inszone Insurance Services
WESTPORT, Conn., July 1, 2020 /PRNewswire/ -- BHMS Investments, LP, through affiliated funds ("BHMS"), completed a material investment in Inszone Insurance Services, LLC ("Inszone" or the "Company"). Founded in 2002, Inszone is a full-service insurance brokerage firm which provides a broad array of property & casualty as well as employee benefits solutions. Having completed ten acquisitions over the last fifteen months, the Company has expanded from its Northern California headquarters
05-24-2018 | Advertising, Media Consulting, …
Tree Harvester Market
Global Tree Harvester Market Forecast 2018-2025 MaqTec, Tigercat International, …
A comprehensive market study on "Global Tree Harvester Market 2018-2025" examines the performance of the Tree Harvester market. It encloses an in-depth Research of the Tree Harvester market state and the competitive landscape globally. This report analyzes the potential of Tree Harvester market in the present and the future prospects from various angles in detail. Leading Manufacturers Analysis such as - Tigercat International Inc, ASA-LIFT A/S, Schieler Harvester, Henry Colombo Equipment,
05-21-2008 | Sports
Castrol UK and Ireland
Moto GP: Castrol riders take points at Le Mans
Both Castrol-backed Team San Carlo Honda Gresini riders Shinya Nakano and Alex de Angelis added to their points tally in the French GP at Le Mans on Sunday, finishing tenth and 12th respectively in a difficult race run at a furious pace. Despite the points, the results were again disappointing for team chief Fausto Gresini, struggling to get the satellite-team Honda machines and riders to display their full capabilities. \"Our potential is
05-05-2008 | Sports
Castrol UK and Ireland
Moto GP: Castrol rider in the points in China
Castrol-backed Team San Carlo Honda Gresini riders Shinya Nakano and Alex de Angelis had a difficult weekend in the final Chinese Grand Prix at the Shanghai Circuit, with neither able to confirm the performance they’d shown in practice. Weather played a critical factor in today’s race. After a rain-free weekend, the skies opened up on race morning, forcing the teams and riders to practice in conditions that could easily change. In
04-08-2008 | Sports
Castrol UK and Ireland
Moto GP: Tough start at Qatar for Castrol teamsters
The first ever after-dark grand prix race in any form of motorsport, the opening round of the MotoGP season at Qatar, was a hard night’s work for the two new riders in the Castrol-backed Honda Gresini team. Only one of the Honda-mounted pair finished the race: the experienced Shinya Nakano, who gained points for 13th place after a busy ride from his 15th-placed qualifying position. Nakano was less than a tenth
04-03-2008 | Sports
Castrol UK and Ireland
Moto GP: Pedrosa claims right royal win
Spanish racer Dani Pedrosa won an audience with King Juan Carlos of Spain on Sunday, after a copybook start-to-finish victory in his home GP at Jerez in the south of the country. The second race of the season also brought improvement from the Castrol-backed Gresini Honda riders, who both finished in the points. The Pedrosa led from start to finish, while behind him Yamaha’s Valentino Rossi moved past team-mate and pole starter
Comments about openPR
I can't but agree to the positive statements about your portal: easy to use, clear layout, very good search function, and quick editing!
Jens O'Brien, Borgmeier Media Communication