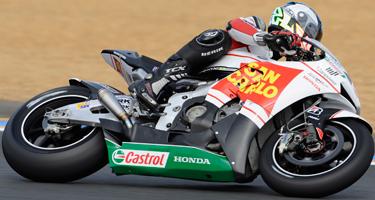 Both Castrol-backed Team San Carlo Honda Gresini riders Shinya Nakano and Alex de Angelis added to their points tally in the French GP at Le Mans on Sunday, finishing tenth and 12th respectively in a difficult race run at a furious pace.Despite the points, the results were again disappointing for team chief Fausto Gresini, struggling to get the satellite-team Honda machines and riders to display their full capabilities."Our potential is much higher, but we couldn't show it today," said the former double 125cc World Champion. "We will continue to fight to help Shinya and Alex reach more satisfactory conclusions."The race brought a second successive victory and the points lead to five-time MotoGP champion Valentino Rossi, who overcame difficult conditions including a spattering of rain mid-race for a majestic win over factory Yamaha team-mate Jorge Lorenzo and satellite-team Yamaha rider Colin Edwards.Earlier championship leader Dani Pedrosa (Honda) was fourth, unable to match the speed of the Yamahas; defending champion Casey Stoner had to pit to change to his spare bike after running into mysterious engine trouble with his Ducati.Nakano had started from row five. "That always makes life difficult," he said. "But in the early laps I couldn't even stay with the group in front of me. Only when it started to rain I could improve my pace and make up some ground."Towards the end, Randy de Puniet caught me out under brakes, and I missed out on ninth," the Japanese star said.Class rookie de Angelis did find some comfort, though the rain had the opposite affect on him."I'm happy because today we managed to run half the race together with other guys on satellite bikes like mine. Unfortunately when it started to rain I had no choice but to drop my pace, because I was getting a lot of tyre chatter, and I lost contact with the group."The team will stay on at Le Mans after the race for further testing, as they try to unlock the secrets of the difficult 2008 Honda. Then there is a weekend off before two back-to-back races at Mugello in Italy and Barcelona in Spain.The next race is the Italian Grand Prix at Mugello on 1 June.French GP top six finishers * 1 V Rossi – Yamaha * 2 J Lorenzo - Yamaha * 3 C Edwards – Yamaha * 4 D Pedrosa – Honda * 5 C Vermeulen – Suzuki * 6 A Dovioso – HondaTeam News: New parts boost chancesNew parts from Honda boosted the spirits of the Castrol-backed team riders at the start of the European season, with both riders reporting that a revised slipper clutch improved corner entry with better control of engine braking. "We had been having some chattering problems under braking," said Alex de Angelis. The Italian was also pleased with new tyres bought by Bridgestone. "They are like those I tested pre-season, that I found easier," he said.Race News: Rossi breaks the chainRossi's second win in succession broke a run of four races with different winners – a situation that has happened only five times before in almost 60 years of the motorcycle World Championship. The variety proves that the second year of the 800cc class has achieved the competitive standards hoped for when the switch was made last year. It also suggests a championship that is still open, after five of 18 rounds have been completed. "It's too late for our riders, but it looks as though it will be an exciting year," said team spokesman Carlo Merlini. For more information on the Castrol-sponsored Honda Gresini team please visit the Racing and Sponsorship section of our homepage:http://www.castrol.com/castrol/subsection.do?categoryId=9016838&contentId=7030261For more information on Castrol's sponsorship activities related to sports please visit:http://www.castrol.com/castrol/genericsection.do?categoryId=3208&contentId=7034605http://www.castrolindex.comMotor Oil and Lubricants Castrol UK and Ireland Castrol UK Ltd, Wakefield House, Pipers Way, Swindon SN3 1RE United Kingdom http://www.castrol.co.uk Press contact: Caroline Topping Phone: +44 (1793) 452781 eMail: Caroline.topping@uk.bp.comCastrol is the world's leading specialist provider of lubricant products. Most people know Castrol oil for vehicles such as car oil, engine oil and synthetic oil as well as motorcycle oil. But there's not just Castrol motor oil, we also produce lubricants for vehicles in transport and construction industries, such as heavy goods vehicles, buses and earth moving machinery. Castrol UK feature the brands EDGE, Magnatec, GTX, SLX Professional, Elixion, Enduron and Tection among others.

05-22-2008 | Sports
Castrol UK and Ireland
WTCC: Priaulx on the podium in Spain
Castrol BMW Team UK driver Andy Priaulx got his World Touring Car Championship campaign back on track after claiming a hard-fought podium finish in the second race of the third round of the championship at Valencia. Priaulx’s first podium finish of the season came after earning himself a place at the front of the reverse grid by taking seventh in race two. After taking the lead at the start of the
05-22-2008 | Sports
Castrol UK and Ireland
European Football Championship 2008: Chopping and changing
The axe continues to fall – but there’s a surprise return for three veterans while two coaches heed the advice of the Castrol Index... Five becomes four France coach Raymond Domenech has played Juventus striker David Trezeguet five times since the 2006 World Cup, but that won’t become six this summer. Trezeguet - third on his country’s all-time list behind Thierry Henry and Michel Platini with 34 goals – has lost out
05-21-2008 | Sports
Castrol UK and Ireland
European Football Championship 2008: Mind over matter
Castrol Index sports psychologist Andy Barton reveals why goal celebrations, positive thinking and smiling faces could be key to success this summer… “Getting a player into the perfect frame of mind is a fine balancing act. Some players perform best when they are highly charged; others need to be more relaxed. Cristiano Ronaldo, for instance, is an extrovert who needs to feel ‘pumped up’ to reach his best, and can be
05-20-2008 | Sports
Castrol UK and Ireland
WRC Rally: Ford stays top after Sardinia thriller
Castrol-backed Ford drivers Mikko Hirvonen and Jari-Matta Latvala finished second and third respectively in a thrilling Rallye d’Italia after harrying Citroen-rival Sebastien Loeb all the way to the flag in Sardinia. The result saw the Castrol-Ford Abu Dhabi team and Hirvonen maintain their WRC lead in both championships on what was the first in a run of three European gravel events in just four weeks. Hirvonen ended the opening day in fourth