Mazeness II - A mobile game to freak out 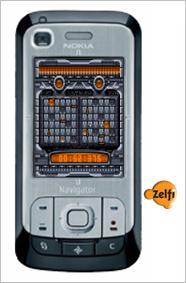 There are only a few mobile games not loosing their attraction after a short time. Mazeness II doesn’t belong to these games but rather sends the players into rapture because this is an intelligent puzzle requiring a great dose of logic and patience.In Mazeness II it is the challenging task for the player to control two or more balls on two parallel sets. Highlight of the game is the structure of both sets being totally different, but nevertheless the balls on both sets are following simultaneous controls. So if the player moves the ball on the left set in one direction, the ball on the right set just follows this move.Only by the help of structured obstacles, the player can inhibit the move of one or more balls and so prevent their loss. In each level new surprising conditions await the player which must be overcome in a deliberate manner. With increasing difficulty, the challenge rises to guide the balls to target safely. Additional features like teleport and stopper are serving also as support to block moves but at the same time they raise the complexity of the task.Mazeness II is played against time. The faster one task is solved the higher the score is rising. With fiddly tasks the mobile game offers great entertainment. More than forty levels, high quality graphic, increasing difficulty, and a successful mixture of puzzle and straight reasoning classify Mazeness II as first-class timeless mobile game.The game can be downloaded for € 2.99 at http://www.zelfi.com/en/mobile-games/games/mazenessIl/.Zelfi AG CEO: Andreas Berg Erthalstr. 1 D-55118 Mainz Germany Telefon: +49 6131-9064850 Telefax: +49 6131-9064853 info@zelfi.com www.zelfi.com/en/About Zelfi The Zelfi public limited company is a start-up located in Mainz/Germany being actively involved in the fields of Mobile Marketing and Mobile Entertainment by providing software products. The development and the service of a Mobile Marketing platform is our core business. This innovative technology-platform forms a nodal point of mobile phone users, mobile phone software developers and advertisers. The Zelfi newsletter provides current information about new mobile games. Subscribe to Zelfi newsletter at www.zelfi.com/en/newsletter/.