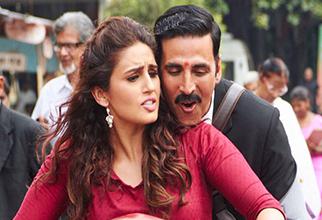 The makers of the film 'Jolly LL.B 2' released the first song from the film 'Go Pagal' in the recent past which gave us a perfect dance number to groove this Holi. While the film has a comedy genre, it has an romantic aspect too. And what better it can be than a romantic song to depict romance. The romantic track from the film 'Bawra Mann' is out just a few hours ago.Akshay Kumar tweeted the song link on his Twitter handle by saying, "Here's my most fav. romantic song,pay attention to the lyrics,they're simply beautiful, #BawaraMann from #JollyLLB2! http://bit.ly/BawaraMann-JollyLLB2 …" The song showcases the romance between Akshay Kumar and Huma Qureshi as typical husband and wife. The song starts with Akshay making a peg of whiskey for Huma and asking her to find one husband in the city who does this thing for his wife. Light hearted romance between the duo is just one thing we cannot miss.Akshay a doting husband even cooks for his onscreen family and Huma in reply compliments him like a perfect wife. The song has been shot in Lucknow. The song is sung by Jubin Nautiyal and the lyrics are by Junaid Wasi.'Jolly LL.B 2' is directed by Subhash Kapoor and will release on February 10, 2017.Watch the song here.FRIDAYMOVIEZ.COM is a chic movie portal bringing you the best of Bollywood and Hollywood in terms of the up-to-the-minute news, movie reviews and trailers, celebrity images, videos and profiles, exclusive inside information comprising original features, live event coverage, red carpet events, comprehensive archives and more.#G-1, New Udyog Mandir 2 Moghul Lane, Mahim (W) Mumbai 400016 India

02-20-2019 | Business, Economy, Finances, B …
eonmarketresearch
Global Sodium Nitrate Market 2019 - BASF, Sumitomo, Akshay Group, SNDB (M/S Seth …
This new report by Eon Market Research, titled “Global Sodium Nitrate Market 2019 Research Report, 2015 – 2025” offers a comprehensive analysis of Sodium Nitrate industry at a global as well as regional and country level. Key facts analyzed in this report include the Sodium Nitrate market size by players, regions, product types and end industries, history data 2014-2018 and forecast data 2019-2025. This report primarily focuses on the study
04-20-2018 | Industry, Real Estate & Constr …
WISE GUY RESEARCH CONSULTANTS PVT LTD
Global Sodium Nitrate Market Analysis 2018 Forecasts To 2023: BASF, Akshay Group …
Global Sodium Nitrate Market Description:- Wiseguyreports.Com Adds “Global Sodium Nitrate market 2018: Global Analysis, Industry Size, Share, Trends, Application Analysis and Growth Opportunities Forecast to 2023” To Its Research Database The global Sodium Nitrate market will reach xxx Million USD in 2017 and CAGR xx% 2011-2017. The report begins from overview of Industry Chain structure, and describes industry environment, then analyses market size and forecast of Sodium Nitrate by product, region and
01-25-2017 | Media & Telecommunications
FridayMoviez
Akshay Kumar Has A Brilliant Idea To Support The Families Of Martyrs
Known for his active co-operation in every social cause, Akshay Kumar is one such Bollywood actor who had always been supporting the army forces and the ones who guard our nation on the borders; tagged as the patriotic actor himself, Akshay recently opened up about women safety and expressed his concerns about the same through a video. This time Akshay is standing up for the betterment of the families of
01-04-2017 | Leisure, Entertainment, Miscel …
FridayMoviez
Go Pagal With The First Track From Akshay Kumar's 'Jolly Ll.b 2.'
Just a day ago Akshay Kumar shared a small teaser of the song 'Go Pagal' from his upcoming film 'Jolly LL.B 2.' The first ever song from the film is finally out today. Akki shared the song link on his Twitter handle by tweeting, "Here it is.. #GoPagal with our first song, my favourite song from #JollyLLB2!!." The song 'Go Pagal' completely justifies its title and shows all the antics by
01-03-2017 | Leisure, Entertainment, Miscel …
FridayMoviez
Akshay, Salman And Karan Come Together For A Big Project
The year 2017 seems to be the year of surprises as many new twists and turns are unfolded right from its first day. The greatest news on the third day of the year is that Akshay Kumar, Salman Khan and Karan Johar have joined hands for a film. The movie will star Akshay Kumar as the main lead and Karan Johar will produce it along with SKF Films which is Salman's
12-28-2016 | Advertising, Media Consulting, …
FridayMoviez
Akshay Kumar To Endorse A Popular Vehicle Brand
As we all know how popular Khiladi Akshay Kumar is in the industry. Apart from films Akki is even seen endorsing many top brands be it clothing or lifestyle of homecare. Now the actor is all set to endorse a popular vehicle brand. Akshay Kumar will be the face of Tata Motors Commercial Vehicle business unit. Tata Motors said in a statement, "Indian cinema's 'original Khiladi' will make his blockbuster entry
Comments about openPR
OpenPR is clearly structured and remains true to its principle of confining itself to the essential parts. OpenPR has proven to be a very good and reliable partner to our media agency: Within the shortest time the releases are online and go down well with the media representatives. The success of OpenPR is reflected in the steadily increasing number of press releases. It is good that OpenPR exists!
Ursula Koslik, Director Marketing & PR, F+W Hamburg