A New Song From 'Raees' Is Making Its Way Very Soon 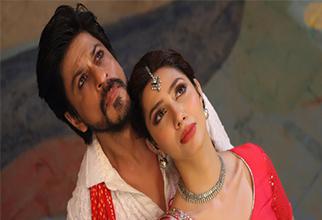 Two songs from the film 'Raees' starring Shah Rukh Khan and Mahira Khan have been released so far and we just loved both of them. While Sunny Leone sizzled in the first song 'Laila O Laila', the second song was a romantic number titled 'Zaalima.' Now the makers are releasing the third song and what's better than a song still to create buzz about the same. The official Twitter handle of Red Chillies Entertainment shared two stills from the song 'Udi Udi Jaye' which will be out soon.The first still is captioned as, "Watch the sky light up this week as we release a new song from Raees. #UdiUdiJayeOutSoon @iamsrk." The still image shows Shah Rukh and Mahira skygazing while in each other's arms.The second still is captioned as, "A new song from Raees is on its way to set your hearts aflutter. Stay tuned! #UdiUdiJayeOutSoon @iamsrk." This still shows SRK and Mahira engaged in some hard-core romance. Dressed in a red ghagara-choli, Mahira looks every bit beautiful and SRK is twinning her attire by donning a white pathani kurta with the red colour bandhani dupatta around his neck. His kohl-filled eyes express both anger and romance.The song is predicted to be a garba sequence and will have typical Gujarati flavour.Let's wait for the song to come out! Till then watch the stills here.FRIDAYMOVIEZ.COM is a chic movie portal bringing you the best of Bollywood and Hollywood in terms of the up-to-the-minute news, movie reviews and trailers, celebrity images, videos and profiles, exclusive inside information comprising original features, live event coverage, red carpet events, comprehensive archives and more.#G-1, New Udyog Mandir 2 Moghul Lane, Mahim (W) Mumbai 400016 India

04-01-2019 | Fashion, Lifestyle, Trends
Neelu Taneja Makeover
Kareena Kapoor Khan awarded International Quality Awards to Neelu Taneja
On March 15, 2019, Bollywood’s acclaimed actress Kareena Kapoor Khan awarded Brands Impact’s International Quality Awards (IQA) to the best bridal makeup artist- Neelu Taneja. To encourage quality improvements in both manufacturing and service sectors in India, Brands Impact a branding company has set up The International Quality Awards (IQA). IQA winners have made considerable accomplishments in carrying out client satisfaction through their devotion to delivering quality products and services,
01-31-2017 | Leisure, Entertainment, Miscel …
FridayMoviez
Soha Ali Khan Turns Writer!
Bollywood beauty Twinkle Khanna chose writing as her profession over acting she married Akshay Kumar. Stepping on her footsteps, Soha Ali Khan is all set to turn writer. Soha's book titled as 'The Perils of Being Moderately Famous' will launched this year. The book will be a troupe of bizarre and funny stories about her royal life. On the contrary, she also clears that gossipmongers won't get any dope about her
01-24-2017 | Leisure, Entertainment, Miscel …
FridayMoviez
'Dhingana' Song From 'Raees' Introduces A New Shah Rukh Khan
Shah Rukh Khan is leaving no stone unturned for the promotion of 'Raees.' Due to Uri attacks, Pakistani actress Mahira Khan will not be promoting in India and the sole responsibility lies on the shoulders of SRK. The duo earlier promoted the film together in Dubai. SRK as Miyanbhai has various shades, a true businessman he is, Miyanbhai is a romantic person too. We've seen his romantic side in the
01-18-2017 | Media & Telecommunications
FridayMoviez
Aamir Khan Issues A Statement In Favour Of Zaira Wasim
Her precocious acting set upon a benchmark to all the youths as she confidently portrayed the role of young Geeta Phogat in the much applauded Aamir Khan's 'Dangal.' Zaira Wasim needs no more introduction as she had already proved her potential as an actor. The girl recently met Mehbooba Mufti, the Chief Minister of Jammu & Kashmir and was trolled for the same when she posted a photo of hers
12-27-2016 | Leisure, Entertainment, Miscel …
FridayMoviez
'Being In Touch' With Salman Khan
Salman Khan celebrates his 51st birthday today and we will like to remind you that just a few days back he made an announcement about launching his own application. He also said that he will unveil the app on his 51st birthday. Now he has kept his promise and his first ever app named as 'Being In Touch' is out. He posted a video on his Twitter handle and captioned it
12-21-2016 | Leisure, Entertainment, Miscel …
FridayMoviez
Kareena Kapoor Khan Blessed With A Baby Boy
The big day has finally arrived. The news which was awaited by the Kapoors as well as the Khans has knocked the door. The new mommy in tinsel town Kareena Kapoor Khan is blessed with a baby boy. She tied the knot with Saif Ali Khan on October 16, 2012 and this is their first child together. Baby was born at 7:30 am in Breach Candy hospital in Mumbai. This news
Comments about openPR
9 o'clock: discuss press release with client, 10 o'clock: submit release to openPR, within the briefest possible time release is published and displayed in a prominent place on openPR.de. I am thrilled!
Zehra Spindler, Calypso Now! - Communication Agency