'Pink' Will Be Screened At UN Headquarters 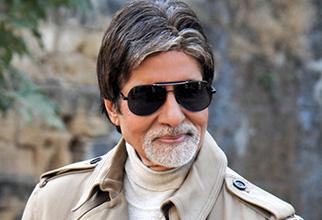 When Amitabh Bachchan, Taapsee Pannu starrer 'Pink' was released on September 16, 2016 it made a huge box-office collections as well as garnered appreciations from every nook and corner. Aniruddha Roy Chowdhury came up with a strong subject which showcased the harassment faced by women in the society.The three leads of the film Taapsee Pannu, Kirti Kulhari and Andrea Tariang portrayed the victims of the harassment while Angad Bedi was successful in portraying the hard core villain. Amitabh Bachchan played the protagonist and highlighted the significance of breaking stereotypes against women.Now the film has added another feather in its cap. The film has been invited for a special screening by the Assistant Secretary General of UN headquarters in New York. Amitabh Bachchan shared the news on his twitter by tweeting, "T 2453 - 'PINK' invited for a special screening of the film at UN Head Quarters, in New York .. by Assitant Secretary General .. honoured !"'Pink' was produced by Shoojit Sircar and also starred Piyush Mishra and Dhritiman Chatterjee.FRIDAYMOVIEZ.COM is a chic movie portal bringing you the best of Bollywood and Hollywood in terms of the up-to-the-minute news, movie reviews and trailers, celebrity images, videos and profiles, exclusive inside information comprising original features, live event coverage, red carpet events, comprehensive archives and more. Positioned to be the unparalleled resource for quality movie infotainment, FRIDAYMOVIEZ.COM delivers the ultimate user experience for all movie enthusiasts worldwide with its cutting edge technology, high definition videos and images and our ‘paparazzi non-compliant’ content which ensures that the news and information we provide is real, relevant and engaging, without being uncouth or offensive.#G-1, New Udyog Mandir 2 Moghul Lane, Mahim (W) Mumbai 400016 India

01-22-2020 | Sports
Ruder Finn
India’s first Global Sports Injury Conclave held in Bangalore
The Global Sports Injury Conclave 2020 (GSIC), an initiative by Dr. Dayal Foundation (DDF), is the first conclave of the country which focuses on sports injuries. This global conference brought together sports and fitness professionals from across the world such as Jonty Rhodes, Suniel Shetty, Dr Ali Irani, Rajat Bhatia, Lakshmipathy Balaji under one roof with the vision of creating an injury-free Sports Ecosystem. The event was inaugurated by Shri.
09-04-2017 | Tourism, Cars, Traffic
EVENTOURS TRAVELS LLP
All women guided trips to Europe by Eventours Travels
Guwahati, Assam, Sept 2 2017 – Eventours Travels LLP has collaborated with local service providers in Italy, Bulgaria, Azerbaijan , Russia and Croatia to bring in some very competitive unique itineraries in Europe for the year 2017-18. This is going to give big names in group travel like Thomas Cook, makemytrip.com, Globus , goibibo.com etc plenty of reasons to worry about. By including out of the regular tourist circuit destinations
06-06-2017 | Business, Economy, Finances, B …

FHRAI Delegation Demands Uniform GST at 12% for Hospitality Industry
A senior delegation of The Federation of Hotels Restaurants Association of India (FHRAI) India’s apex body for Hotels & Restaurants presented a representation to Union Finance Ministry Officials on Wednesday. Highlighting that the proposal of 28% GST slab will adversely impact the hospitality and tourism industry, the delegation requested the Government to relook at the present proposal and advocated a uniform Hospitality GST at 12% across the country. The delegation
01-12-2017 | Leisure, Entertainment, Miscel …
FridayMoviez
Teaser Of Dabbo Ratnani's Calendar 2017
Like every year ace photographer Dabboo Ratnani is back with his calendar. A calendar which is hot, sexy and glamorous at the same time with top celebs from the industry posing on it. This is the 18th year of the photographer and the calendar. This time Dabboo's calendar will feature 24 celebrities including Amitabh Bachchan, Shah Rukh Khan, Hrithik Roshan, Abhishek Bachchan, Aishwarya Rai Bachchan, Ranveer Singh, Akshay Kumar, Priyanka
12-19-2016 | Leisure, Entertainment, Miscel …
FridayMoviez
Aamir Khan Sings After 18 Years For 'Dangal'
Remember Aamir Khan singing 'Aati Kya Khandala' song with Rani Mukerji in the film 'Ghulam.' Well it had been 18 long years then, that Aamir has not crooned any song for his films. Now he is back to singing and that too as a rapper with his version of the 'Dhaakad' song from the film 'Dangal.' This is the second version of the song while the earlier is already crooned
11-14-2016 | Leisure, Entertainment, Miscel …
FridayMoviez
Watch Aamir Khan As Haanikarak Bapu In This New Song From Dangal
Many Bollywood actors prefer to do multiple films in a period of one year while Mr. perfectionist Aamir Khan is known to do only one film in a year. Now the question arises is Why is it so? Well you will get all your answers in this newly released first song of 'Dangal.' Aamir Khan shared the song on his twitter handle by tweeting, "Here's our chance to get back
Comments about openPR
OpenPR ist the nicest and most clearly laid out PR platform I have seen to this day. The press releases are displayed very nicely and clearly and without any unnecessary frills. The updates are fast and the finished release looks appealing and is clearly legible. Even with 16 years of experience one discovers new things from time to time. Congratulations!
Gabriele Ketterl, Director Marketing & PR, Menads