Hrithik Roshan Ranked As No.3 On The World's Most Handsome Faces List 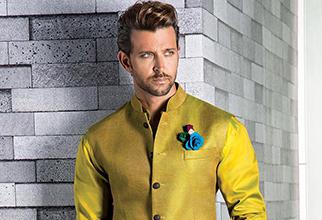 It isn't a surprise that Hrithik Roshan, who is known for his drop-dead Greek God looks has made it to the list of Most Handsome Man in the World list put out by a leading international website. His stunningly good looks, his coloured eyes and over all personality have often got him on the list of best looking men across the world.Keeping the Bollywood superstar company in the envied top three positions are Hollywood actor Tom Cruise, followed by Twilight star Robert Pattinson. Hrithik is in third position and beats even Johnny Depp and Brad Pitt who are at number four and number 8 respectively.Hrithik who is no stranger to being in such lists believes that handsome is what handsome does; is humbled that he has made it to the list. Of course he is happy with the praise lavished on him for his facial features and near-perfect physique. However, he still feels that good looks may have won him that position but what will really make him stand out is his quest to "put a smile on the face of people around him and many out there who could heal with just a little TLC."Salman Khan, who also makes it to the list is ranked at No 7.FRIDAYMOVIEZ.COM is a chic movie portal bringing you the best of Bollywood and Hollywood in terms of the up-to-the-minute news, movie reviews and trailers, celebrity images, videos and profiles, exclusive inside information comprising original features, live event coverage, red carpet events, comprehensive archives and more. Positioned to be the unparalleled resource for quality movie infotainment, FRIDAYMOVIEZ.COM delivers the ultimate user experience for all movie enthusiasts worldwide with its cutting edge technology, high definition videos and images and our ‘paparazzi non-compliant’ content which ensures that the news and information we provide is real, relevant and engaging, without being uncouth or offensive.#G-1, New Udyog Mandir 2 Moghul Lane, Mahim (W) Mumbai 400016 India

You can edit or delete your press release Hrithik Roshan Ranked As No.3 On The World's Most Handsome Faces List here

03-18-2020 | Science & Education
Pilani Chronicle
Proud to be BITSian Giridhar Thunders Ordinary People Extraordinary Teachers mak …
The author Giridhar "Giri" who is an alumnus of institution of eminence Birla Institute of Technology and Science BITS Pilani 1973 - 1978 MSc (Hons) Chemistry is presently Registrar and Chief Operating Officer at name to reckon with Azim Premji University, Bangalore. Giri firmly believes that to bring about Education for Social Change, what India today need is teachers who are awakeners. One is reminded of the quote from Indian
03-01-2017 | Science & Education
JMA Pilani Rajasthan
National Science Day Celebrations at JMA Pilani Rajasthan
To quote Gurudev Rabindranath Tagore “In Science, we go through the discipline of eliminating the personal limitations of our minds and thus reach the comprehension of truth which is in the minds of the universal man”. To popularize the benefits of scientific knowledge, 28th February is celebrated all over India as National Science Day – NSD to mark the discovery of Nobel Prize winning Raman Effect by the great Indian Physicist
02-01-2017 | Media & Telecommunications
FridayMoviez
Hrithik Roshan Pledges His Eyes On His 43rd Birthday
Even as Bollywood superstar Hrithik Roshan's movie 'Kaabil' continues to wow audiences and sets an envious box office trail, the actor himself is winning hearts for quite another reason. Sources say that on his 43rd birthday (January 10) Hrithik pledged to donate his eyes. The light-eyed actor has always been a very sensitive person and during the course of the film in which he and his co-actor Yami Gautam play a blind
01-12-2017 | Leisure, Entertainment, Miscel …
FridayMoviez
Teaser Of Dabbo Ratnani's Calendar 2017
Like every year ace photographer Dabboo Ratnani is back with his calendar. A calendar which is hot, sexy and glamorous at the same time with top celebs from the industry posing on it. This is the 18th year of the photographer and the calendar. This time Dabboo's calendar will feature 24 celebrities including Amitabh Bachchan, Shah Rukh Khan, Hrithik Roshan, Abhishek Bachchan, Aishwarya Rai Bachchan, Ranveer Singh, Akshay Kumar, Priyanka
01-02-2017 | Leisure, Entertainment, Miscel …
FridayMoviez
New Year Treat For SRK Fans! Shares Two New Posters Of 'Raees'
Our calendar has changed and we have finally stepped in an all New Year of 2017. Bollywood superstar Shah Rukh Khan gave a pleasant surprise to his fans by sharing two new posters of his upcoming bollywood movie 'Raees.' He tweeted the posters on his Twitter handle and captioned the first one as, "Tu shama hai toh yaad rakhna... Main bhi hoon parwana..." and the second as, "O #Zaalima..." The first poster
12-29-2016 | Leisure, Entertainment, Miscel …
FridayMoviez
Super Romantic Track From 'Kaabil' 'Kuch Din' Is Out
Seems like the year 2016 will end on a super romantic note as the most romantic track from the film 'Kaabil' starring Hrithik Roshan and Yami Gautam is out. And when Roshan brothers come together for a project expectations are always sky high. Keeping the same in mind, it comes as no surprise that the songs from the film are breaking social media records and turning out to be chart
Comments about openPR
Your portal is fast, simple, and easy to use. Others may have more functions but they also demand more editing time, you have to preformat the text in order to achieve a good result etc. I think openPR is really fantastic!
Andreas Knepper, wallmedien AG