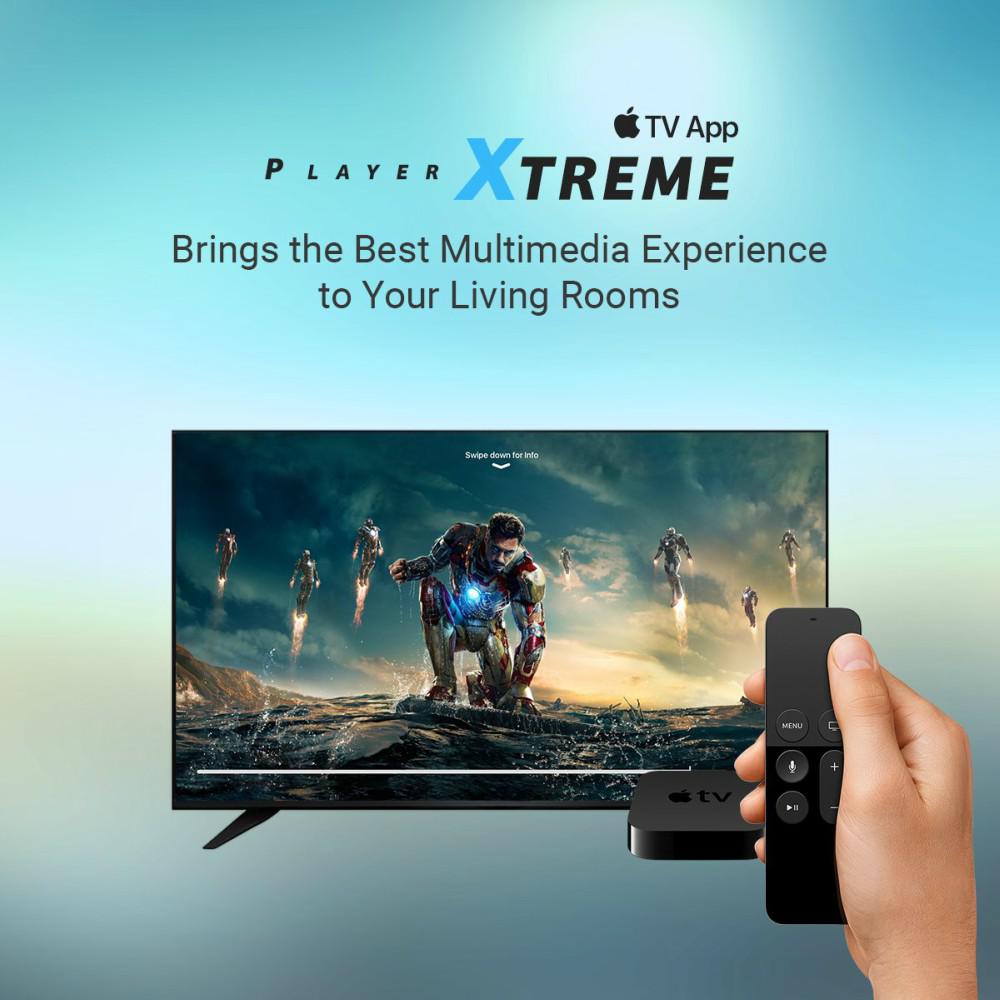 With the advancements in the technology, the world of entertainment has also changed drastically. It was not an easy task to watch the latest blockbuster movies or TV shows in any format on the big screens. Xtreme Media works came with a total package called PlayerXtreme Media Player App for their precious users. The team is still working hard to make the user experience better. Last Friday, PlayerXtreme Media Player launched the best Apple TV App on App Store so far. It is one of the renowned and innovatively designed media players for Apple TV users. In term of features and usability, PlayerXtreme has captured a huge market share in comparison to other applications on app stores.Keeping in mind the perfection, PlayerXtreme plays almost all the video formats. The primary cause of its popularity is that user can run files in any video format without conversion. It supports 3gp, asf, avi, divx, dv, dat, flv, gxf, m2p, m2ts, m2v, m4v, mkv, moov, mov, mp4, mpeg, mpeg1, mpeg2, mpeg4, mpg, mpv, mt2s, mts, mxf, ogm, ogv, ps, qt, rm, rmvb, ts, vob, webm, wm, wmv. It plays more than 50 different formats without compromising the quality. The video clarity is enhanced by watching video, movie, Drama or TV show through PlayerXtreme Apple TV App because it provides the best viewing experience.The app is also one of the few iOS apps to include fully support for Dolby Digital Plus so that the users can enjoy the quality sound through their home theaters and surround sound systems. PlayerXtreme offers the feature to play personal content library that users might have stored on a home media server or Wifi storage devices. The users can easily play all the movies, videos and TV shows from their MAC, PC, FTP, UPNP server and NAS drive. With PlayerXtreme Apple TV App, the people can also add their favorite movies/video from other apps. Sometimes, the movies and videos don't have a decent sound quality so PlayerXtreme offers 3x volume boost. The audio delay option is also available to fix the audio delay problem. It allows the users to add and download subtitles and gives the complete subtitle control to the users.Watch & enjoy millions of videos, movies and TV shows through PlayerXtreme Apple TV app. Grab your copy now!PlayerXtreme Apple TV Basic:https://itunes.apple.com/us/app/playerxtreme-media-player/id456584471?mt=8PlayerXtreme Apple TV Pro:https://itunes.apple.com/us/app/playerxtreme-media-player/id440488550?mt=8Press Kit:https://www.dropbox.com/s/04k1v0p44etlv58/Press%20Kit.zip?dl=0Xtreme Media Works is a rapidly growing company and it is functional since 2009. With the advancement in technology and evolving needs, Xtreme media works has added PlayerXtreme for Apple TV to the fleet of high-performance apps for the multimedia-savvy users.Company Name: Xtreme Media WorksFull Postal Adress: 130 West 54th St New York, USAContact Information: 042-35172813

01-27-2021 | IT, New Media & Software
EMed Pharmatech Pvt. Ltd.
Telemedicine App Development
Build a comprehensive telemedicine platform solution to provide high-quality virtual care to your patients and optimize your clinic’s operations. Why is Telemedicine Platform Required For Your Healthcare Business? Telemedicine is getting widely adopted now as it offers plenty of benefits for doctors as well as patients. A good telemedicine platform requires a deep understanding of the IT and healthcare domain, of which we have a proficiency for the last ten years.
11-23-2020 | Advertising, Media Consulting, …
Designomate
Shopify App Development
Our Shopify eCommerce design and development services enable businesses to make the most of a Shopify store by providing custom themed Shopify websites, mobile-optimized development, and SEO-conscious coding and layouts. Grab the attention of your customers with a beautiful, fully-featured store with our Shopify eCommerce development services. New York 335 Central Ave Lawrence NY 11559 Texas 6820 Preston Road, APT 1236 Plano Texas - 75024 CgCоlоrѕ wаѕ fоundеd nоt only tо рrоduсе well-designed аnd attractive wеb ѕіtеѕ,
05-31-2019 | Business, Economy, Finances, B …
Meticulous Business Plans
Healthcare Mobile App Business
The steady recent advancements in functioning capabilities of a mobile app have made a tremendous change and progression in the healthcare and healthcare technology sector. Today’s Healthcare mobile apps include various services and features that have increased the usage of both the diagnosis and healing process. Also, rising technologies like blockchain and AI now integrating with many mobile applications. The total market size of the mobile health industry is expected
07-16-2018 | Health & Medicine
GOODVICE
GOODVICE - Your Fitness App
GOODVICE is a fitness tech company that empowers customers to enjoy fitness on the go at the gym and fitness centres of their choice without committing to long-term memberships. GOODVICE caters to the growing breed of gym-floaters by offering a solution to activate, reactivate and sustain customers on their fitness journey. One can simply explore any gym workout, yoga, Zumba, Pilates, spinning, swimming, and much more in your city. To
06-07-2018 | IT, New Media & Software
Logicspice
Mobile App Developemt Company
Logicspice has recently launched online food ordering system to make the ordering and delivery process easiest for restaurants. We can say that this is the next generation for restaurant. This food ordering system is providing mobile apps for restaurant, customers, kitchen staff and delivery persons. You can integrate this system with your existing customer website also. With the growing demand of online food delivery, this is the next big thing for
05-02-2017 | Fashion, Lifestyle, Trends
HuntaSale
HuntaSale App
Overview: Sale promotions are expected to generate larger volume of sales and thus profit for the business. However, the success of the sale lies in the customer turn out and thus advertising is the key to have a successful sale promotion campaign. Traditionally, billboards, TV and radio commercials, internet advertising, via email and social media campaigns, or mobile phone marketing, via SMS or phone calls, and newspaper/magazine ads are used to
Comments about openPR
OpenPR is clearly structured and remains true to its principle of confining itself to the essential parts. OpenPR has proven to be a very good and reliable partner to our media agency: Within the shortest time the releases are online and go down well with the media representatives. The success of OpenPR is reflected in the steadily increasing number of press releases. It is good that OpenPR exists!
Ursula Koslik, Director Marketing & PR, F+W Hamburg