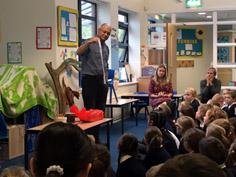 St Francis C of E Primary School in Swindon has just installed a new ‘child-friendly’ class change and PA system to help the smooth running of the school and improve safety for staff and students.“We previously used a hand bell to announce breaks, but this was far from ideal” said school business manager Gabby Clark. “St Francis is a primary school, so we don’t change classes, but the lunch and break times are different for each group of children. We needed a system that could communicate distinct announcements at the right time to each of the different groups of children.”Hertfordshire-based Bodet Ltd installed a Harmonys automated bell system which runs across the IT network using Power Over Ethernet (POE) to power the system, so it requires minimal additional wiring. The central control unit stores 16 different melody sounds to announce specific events such as start and end of school as well as mid morning and lunchtime breaks. “Announcing the start of school is useful as it lets parents know that school has started and they can leave.” added Mrs Clark.As each speaker has its own IP address, groups of sounders can be zoned, restricting alerts and announcements to specific areas within the school. “The zoning facility is a real benefit to us.” added Mrs Clark. “It means that we can make general announcements to the whole school, or we can send specific melodies or announcements just to the KS1 or the KS2 pupils. Each of the children and staff in the groups recognise their own sounds, so they know it applies to them, and it works very well” The school also added a microphone and emergency button which integrates with the Harmonys system, and allows verbal announcements to be broadcast live throughout the school or recorded for storing on the main control unit. “In an emergency we have a fire bell which alerts the staff and children to evacuate the premises. However, if a situation arises which requires the school to go into lockdown, there was no way we could communicate it quickly, which could compromise the safety of the school.” said Mrs Clark. “Now we can create specific announcements which tell staff and students clearly what they need to do. It’s been useful to locate staff members if they’re needed urgently, or to remind them of a meeting. Fortunately we haven’t had to use it in an emergency yet, but it’s reassuring knowing it’s there if such a situation should arise.”More about Bodet Ltd Bodet Ltd is the British subsidiary of French-based Bodet Group which have been leading the market in time measurement products since the 1860s. The Group have five subsidiaries across Europe exporting to 60 countries and have expanded from clock-making into IT-based time and attendance, access control, school class change systems and sports scoreboards.The Kelio Visio X7 was developed by Bodet and won a 2015 Red Dot Award for its innovative qualities and design excellence.The Bodet Group has over 35,000 clients including Fedex, Serco, TalkTalk and the European Parliament as well as state and independent schools and individual public sector institutions such as DVLA and NHS.For more information visit www.bodet.co.ukBodet Ltd 4 Sovereign Park Cleveland Way Hemel Hempstead Herts HP2 7DA

04-27-2018 | Industry, Real Estate & Constr …
Bodet Ltd
Are Your Factory Staff Really Safe at Work?
All employees are entitled to work in an environment where risks to their health and safety are properly controlled, especially in large industrial complexes where there are increased risks. It is therefore incumbent on every employer to carry out an assessment that considers all potential dangers to both workers and visitors, and ensure they are taking reasonable steps to mitigate each and every one. In many industrial environments, substances found in
12-12-2017 | Business, Economy, Finances, B …
Bodet Ltd
Challs Cleans Up with Interactive Time and Attendance System
Challs, the international manufacturer of household cleaning products, has just installed the very latest interactive attendance and workforce management system for their 50 staff. The new system automates time and attendance monitoring, saving time for HR and payroll staff and increasing productivity. Graham Burchell started Challs in 1990 working from home, out of his front bedroom. Still a family run business, Challs saw rapid year on year growth, and has established
05-25-2016 | Industry, Real Estate & Constr …
Bodet Ltd
New Integrated PA, Sounder, and Emergency Alert System introduced by Time Manage …
Harmonys, a versatile network-based PA, audio and bell sounding system has just been launched by Bodet Ltd one of Europe’s leading suppliers of time management solutions. This innovative system uses standard Internet Protocol and POE (Power over Ethernet) which means it can run over established computer networks, so is ideal for refurbishment projects as well as new builds. Harmony’s broadcasts a range of live and pre-recorded announcements, high quality melody

11-21-2020 | Leisure, Entertainment, Miscel …
Advent Messenger
Fratelli Tutti: Ganoune Diop Praises Pope Francis’ Encyclical
The pope is working overtime to unite all of the religious faiths of the world into one family. Pagans, spiritualists, Mother Earth worshippers, homosexuals, Protestants, Catholics, indigenous faiths and eastern religions are all part of Rome’s one-world brotherhood. Truth and doctrine no longer matter anymore according to the Pope’s encyclical, Fratelli Tutti. Just yesterday, Roman Catholics, Evangelicals, Orthodox and Seventh-day Adventists gathered to praise Fratelli Tutti. Over thirty religious leaders
02-22-2019 | Arts & Culture
Wiedmann Media AG
Pope Francis receives unique Bible translation from Germany
Rome / Stuttgart. Faith can move mountains. In this case, the saying goes even beyond death. At the general audience, in the audience hall Paul VI in Rome, Pope Francis received the number ONE of the limited Wiedmann Bible ART edition on February 20th. The original is worldwide unique. It is a visual narrative of the Bible depicting the Old and New Testament in 3,333 illustrations. A printed copy of
12-27-2018 | IT, New Media & Software
ENO8
William Francis joins ENO8 as Chief Architect
Dallas, December 2018 - ENO8, a leading digital product and innovation development company, announced that William Francis joined the company in the role of Chief Architect. ENO8 is committed to serving businesses looking to disrupt their industries using emerging technologies like AI, Voice UI, mobile, and digital transformation. The company is renowned as a product team for hire, fueled by innovation and agility. William will spearhead multiple facets of the
10-10-2013 | IT, New Media & Software
Scope eKnowledge Center
Scope collaborates with Taylor & Francis to create MARC records
Scope e-Knowledge Center (Scope), a leading provider of content enhancement and knowledge services, has recently completed an assignment with Taylor & Francis (T&F) to create MARC records for XML archives across 15 categories of publication types, including journals, books, reports and acts based on RDA guidelines for their cutting-edge digital resource, the South Asia Archive, developed in association with the South Asia Research Foundation in response to growing demand from
08-26-2013 | Associations & Organizations
Setty & Associates International, PLLC
Francis A. Gregory Neighborhood Library achieves LEED Gold certification
Setty & Associates in collaboration with Adjaye Associates and Wiencek + Associates has succeeded in earning environmental praise by turning DCPL’s Francis A. Gregory Neighborhood Library facility into an energy efficient building. The new Francis A. Gregory Neighborhood Library encircling an area of 26,372 SF has become an eminent example for showcasing efficiency in preserving state-of-the-art and intriguing design without down grading the high-performance features of the building. Design
04-23-2012 | Science & Education
St. Francis School of Law
St. Francis School of Law Goes Mobile
In an effort to make it even easier for students to earn their law degrees, St. Francis School of Law has developed a platform that now allows students to attend online law classes through their mobile devices, including smartphones and tablets. This new capability to attend law school online through a mobile device highlights the unique advantage St. Francis’ Silicon Valley location provides to its students in all corners of
Comments about openPR
9 o'clock: discuss press release with client, 10 o'clock: submit release to openPR, within the briefest possible time release is published and displayed in a prominent place on openPR.de. I am thrilled!
Zehra Spindler, Calypso Now! - Communication Agency