KJo Grts Ranveer Singh and Ranbir Kapoor On A Couch! 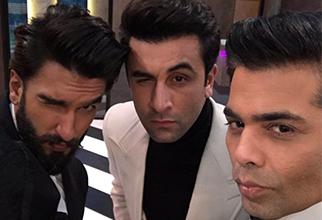 We all know that Karan Johar is back on Television with the fifth season of his famous chat show 'Koffee With Karan.' Viewers love to watch this show as they get to know much more about their favourite stars. And this time it is more personal as Karan will enter in a personal conversation with the actors. Shah Rukh Khan and Alia Bhatt graced the couch as they appeared in the opening episode of the show.While Karan comes up with some interesting jodis every year, this time the TV screens will be taken up by storm as two handsome hunks of Bollywood will grace the couch together. News were round the corner that Ranveer Singh and Ranbir Kapoor will shoot for an episode for the show. While we were a bit dicey about the news, Karan Johar confirmed it with a picture on his Twitter handle. Karan posted a picture with Ranveer and Ranbir right from the sets of Koffee With Karan and captioned it as, "This is what happened today!!! #koffeewithkaran."While Ranveer and Ranbir are seen partying together, it would be interesting to watch Karan Johar getting up, close and really very personal with the duo.Are you excited for this episode? Karan Johar, Television, Fifth Season, TV Show Koffee With Karan, Shah Rukh Khan, Alia Bhatt, Ranveer Singh, Ranbir KapoorFRIDAYMOVIEZ.COM is a chic movie portal bringing you the best of Bollywood and Hollywood in terms of the up-to-the-minute news, movie reviews and trailers, celebrity images, videos and profiles, exclusive inside information comprising original features, live event coverage, red carpet events, comprehensive archives and more. Positioned to be the unparalleled resource for quality movie infotainment, FRIDAYMOVIEZ.COM delivers the ultimate user experience for all movie enthusiasts worldwide with its cutting edge technology, high definition videos and images and our ‘paparazzi non-compliant’ content which ensures that the news and information we provide is real, relevant and engaging, without being uncouth or offensive.#G-1, New Udyog Mandir 2 Moghul Lane, Mahim (W) Mumbai 400016 India

You can edit or delete your press release KJo Grts Ranveer Singh and Ranbir Kapoor On A Couch! here