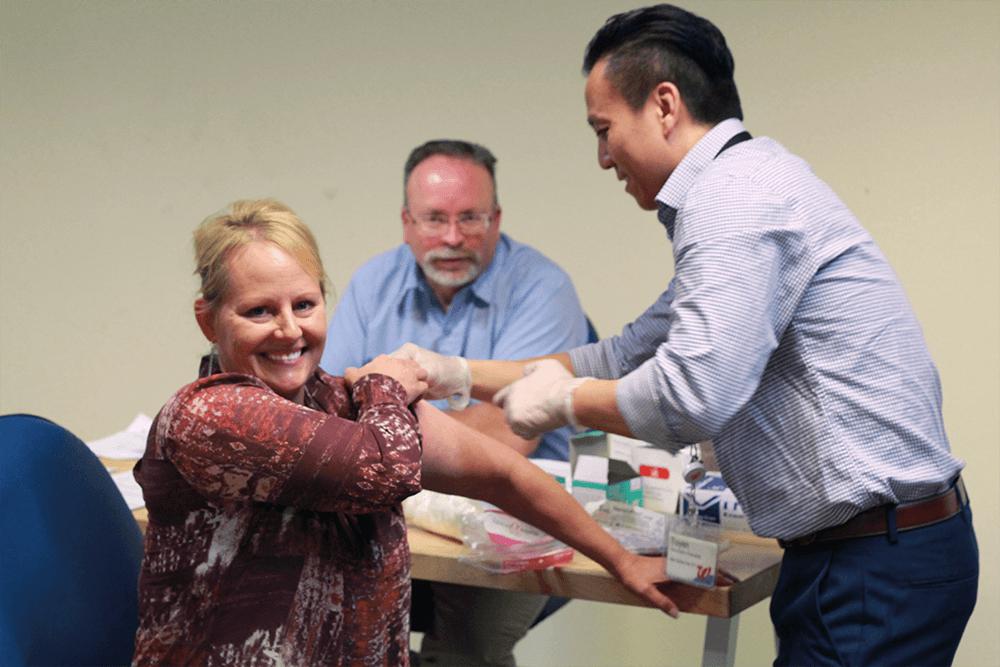 It's that time of year again — we're at the start of the annual epidemic of seasonal influenza, which (in North America) peaks between now and April. As a business owner or office manager, you may well know the tremendous disruption that influenza, commonly known as the flu, can cause when it spreads from one employee to the next across your organization. According to a recent review of the scientific literature, each individual who comes down with the flu can miss anywhere from a day and a half to nearly six days of work.Another way to look at it: flu and related influenza-like-illness (ILI) cause 45% of lost workdays among older employees. For a smaller business, losing that much time to key employees being down with the flu could be economically damaging.But it can be worse – because influenza can be deadly too.While we haven't seen a severe pandemic of influenza since the World War I era — which killed millions of people around the world — the flu continues to claim its toll of victims year after year, particularly among those over age 65. The CDC estimates that over a period of three decades (1976 – 2007), flu-related deaths in the US ranged from 3,000 to 49,000 people each of those years.Flu Economic Costs Add Up: Estimates as High as $87.1 Billion Each Year At the macroeconomic level, there is quite an economic cost to each year's seasonal flu epidemic. According to another study is published in the scientific journal Vaccine, flu cases resulted in 3.1 million hospitalized days and 3.4 million outpatient visits, with a medical bill that averaged $10.4 billion annually. The projected lost income due to illness (or worse, loss of life) came to $16.3 billion annually. Adding up these two figures gives us an estimate of the total cost of flu each year: $87.1 billion, according to this study.Flu Shot Frequently Asked Questions1. Why Should Someone Get Flu Shot? If you get a flu shot at the beginning of flu season, you're statistically much less likely to get influenza this year. For example, last flu season the CDC (Centers for Disease Control) found that children who were immunized with the flu shot were 60% less likely to end up at the doctor's office with a case of the flu. Also, if you do happen to contract the flu despite getting a flu shot, your symptoms will be much milder and shorter if you've had the flu shot.There's another important reason to get the flu shot: you're not only protecting yourself, but you're also helping protect those around you. If enough people in a given community or workplace are vaccinated, a concept that virologists call Herd Immunity can kick in. Establishing herd immunity means that there's much less likelihood of the virus spreading through the group; this can also help protect infants under six months of age, or those rare individuals who cannot get the flu shot from contracting the flu.2. Are Flu Shots Safe? The CDC reports that hundreds of millions of people over the last 50 years have been safely vaccinated with the flu shot, making it one of the safest medical products available. Even if you experience mild side effects, they will be much less severe than contracting influenza itself.3. Should Kids and Pregnant Women Get a Flu Shot? Since 2010, the CDC has recommended that everyone who is six months or older get a flu shot. This includes pregnant women and people with chronic health conditions, such as HIV.(There are rare exceptions to this guidance, see item 4 below.)By taking a universal flu vaccination approach, the CDC believes we can expand protection against the flu to more people and help protect those who are at high risk of serious complications from influenza.Note: While nearly everyone should get a flu shot, the actual vaccine formulations may vary, depending on your age. For example, the formula for seniors older than 64 is different from the one given to younger adults or the one designed for children.4. Who Should Avoid Getting a Flu Shot? There are just a few cases where a flu shot is not recommended...Read more...https://formaspace.com/articles/health-care/benefits-workplace-flu-shot-program/?utm_source=openpr&utm_medium=content&utm_campaign=article-110916Formaspace advances the spirit of discovery and creation through the design and manufacture of custom business furniture. Our furniture marries form to function with flexible solutions for clients in the laboratory, industrial, and office environments.Formaspace serves over 80% of the Fortune 500, as well as universities, governments, small businesses, and individuals.800.251.1505 design.consultant@formaspace.com 1100 E. Howard Lane, Suite 400 Austin, TX 78753

07-22-2020 | Health & Medicine
Coherent Market Insights
Researchers Develop Microneedle Flu Vaccine for flu vaccination
New research funding to develop commercially available micro needle flu vaccine, which would pace up the launch of these products. In 2015, the Georgia Institute of Technology and Micron Biomedical were awarded US$ 2.5 million in grants from the Bill & Melinda Gates Foundation to advance the development of dissolvable microneedle patches for polio immunization. This would also widen up the disease profile for which microneedle vaccine could be developed. Growing
04-22-2019 | Health & Medicine
Market Density
Global Flu Vaccine Market Research Report
This report studies the global Flu Vaccine market status and forecast, categorizes the global Flu Vaccine market size (value & volume) by manufacturers, type, application, and region. This report focuses on the top manufacturers in North America, Europe, Japan, China, and other regions (India, Southeast Asia). The major manufacturers covered in this report Sanofi-pasteur Novartis GSK Abbott Pfizer CSL Hualan Bio Changchun Bio Alephbio Sinovac CS Vaccine Tianyuan Bio Tiantan
01-29-2018 | Health & Medicine
DPI Research
US Flu Vaccine Market Research Report Analysis
United States flu vaccine market is expected to reach nearly US$ 3 Billion by 2024. Growth in US flu vaccine market can be attributed to factors such as increased disease awareness, expanded recommendations by governmental and advisory bodies to be vaccinated against flu vaccine and introduction of quadrivalent flu vaccine. Long–term Growth Projection and Development: • Sanofi to Acquire Protein Sciences Corporation • It is likely that more than 185 Million persons being
08-07-2017 | Health & Medicine
DPI Research
United States Flu Vaccine Market & Forecast
United States Influenza Vaccine Market is expected to reach more than US$ 2.5 Billion by the year end of 2022. Market growth can be attributed to factors such as increased disease awareness, expanded recommendations by governmental and advisory bodies to be vaccinated against influenza vaccine and introduction of quadrivalent influenza vaccine. The research report presents a comprehensive assessment of the market and contains thoughtful insights, facts, historical data, and statistically supported and
12-09-2010 | Health & Medicine
Sunlight Research Forum (SRF)
Sunshine vitamin prevents flu
The vitamin D supply is one of the key factors for the outbreak and the course of influenza epidemics. Norwegian scientists have drawn this conclusion from a study on influenza epidemics, which has now been published in the specialist journal “International Journal of Infectious Diseases”. According to this study, with these influenza epidemics the infection and mortality rates increase with decreasing exposure to sunlight and thus, with decreasing vitamin D
02-06-2006 | Health & Medicine
SCH
Bird Flu..? No Funky Chickens Here
Many health professions now agree that hypnosis as a therapy can achieve high quality results in many psychological and even physical complaints. However, Clinical Hypnotherapist and author Richard MacKenzie, based in Oxfordshire UK, has discovered a new way to best use the principles of hypnosis, but without all of the mysticism that we often relate to hypnotism. Following his research findings, he put together a stand-alone process which he calls SELF-CHANGE
Comments about openPR
We publish our press releases on openPR.de because we like people who are "open" - just like us.
Frank Obels, CEO, INCONET - Informationssysteme, Communication und Netzwerkberatung GmbH